Riches of the Large Ensemble (Part 2)

As we sit in our homes in the early stages of the pandemic, music and arts seem even more important.  Other issues seem to be swept under the legislative carpets but not immigration––for all intents and purposes, no one is legally crossing the borders.  Still, we should all sit and watch the DVD that comes in the new 3-disk set from Felipe Salles Interconnections Ensemble "The New Immigrant Experience: Music Inspired by Conversations with Dreamers" (Tapestry).  No matter how you feel about the immigration situation in the United States and around the world, putting a human face and voice to the issue is so important. 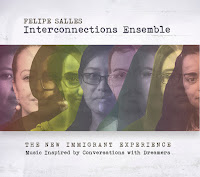 The music stands up well without the video; in fact, this is a brilliant program that Salles has composed and arranged.  His 2018 Tapestry release, "The Lullaby Project (and Other Works for Large Ensemble",  was excellent (one of my Top Ten recordings of that year)––this music is even better. Salles, a Brazilian by birth, uses numerous rhythms from his homeland during this 11-song program.  Kudos to the rhythm section and, especially to the composer's use of Ryan Fedak's mallet percussion. Also worthy of mention is how brilliant (as in "illuminating") the sections sound, how they serve to advance the melody and open up spaces for solos. And this is not a program with many people soloing on every song (the average length of which is nine minutes).  When they do occur, the results are uniformly excellent. There's even a touch of modern electronic playfulness on several tracks e.g. guitarist Kevin Grudecki's heavily amplified solo on "IV: A Part And Not The Other" plus the "electronics"-enhanced trumpet solo (Eric Smith) and tenor sax solo (Mike Caudill) on "IX: These Things That Are Taken For Granted".

Truly, the best part of "The New Immigrant Experience" is the writing––this music, some of whose melodies are based on the cadence of certain words spoken by the people the composer interviewed during the process), stands out from the opening moment until the last notes have faded.  Even after listening to the stories of the nine "Dreamers", the feeling one gets from the music is hope, positive hope. Please listen to the stories, then listen to the music.  Then listen again and share with friends and your state and federal politicians. Felipe Salles has something to say and he does so brilliantly, especially with the aid of the Interconnections Ensemble.

For more information, go to www.sallesjazz.com.

Anna Webber (tenor saxophone, flute) and Angela Morris (tenor saxophone, flute) started their big band, in fact the Webber/Morris Big Band, in 2015, gathering an ensemble of New York City musicians to play music that refers to the past, is very much of the present moment, and often looks to the future.  The W/MBB has just issued its debut album, "Both Are True" (Greenleaf Music) and, like the aggregation's live show, this music is bound to turn grab one's attention. 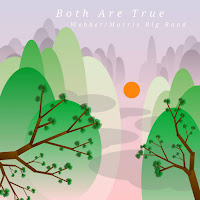 Over the course of 58+ minutes, so much happens.  Voices step out of the songs, the different sections take on various roles, the music is both introspective and communal, emotional and cool, pulsating and ruminative, yet always alive.  "Climbing on Mirrors" (A.W. composition) opens the program with an urgent three-note staccato; immediately, other horns ands reeds pick up on playing slight variations a la Steve Reich. Only drummer Jeff Davis gets to move around freely. When the entire band enters, it's only for a short moment and one hears shades of the music of Darcy James Argue. As alto saxophonist Charlotte Greve moves into her solo, pay attention to what else is occurring. Soon, a "groove" emerges with Davis, bassist Adam Hopkins, and vibraphonist Patricia Brennan the spark plugs. Still, this is "slippery" music in that the shapes are continually shifting, creating a tension that is never quite dispelled. 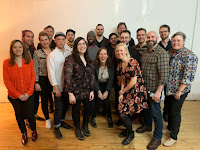 For some listeners, the elusive quality of the music may be off-putting but, for this writer, it's engaging. Both Anna Webber and Angela Morris have roots in the avant-garde, creative classical music (Ms. Webber), and pop (Ms. Morris) with their individual works covering much territory. That's the spirit which pervades this music. Whether it's the two short duos performed by the leaders or the sombre "Coral" (A.M. composition), an elegy for orchestra out of whose floating chords and little "noises" the solo voice of Adam O'Farrill rises with short notes and long tones that begin to coalesce  into a series of phrases that pick up in intensity as the ensemble roils below him. Other voices give chase but soon the bottom disappears and the clarion call of the trumpet leads to a gentle finish.

There's much more, such as the rollicking "And It Rolled Right Down" (A.W.) with its triumvirate of Adam Schneit (clarinet), Jake Henry (trumpet), and Reginald Chapman (bass trombone) "conversing" over the stumbling rhythms plus Ms. Webber's "Reverses" that closes the album. With an opening  melody that suggests "The Peacocks" by Jimmy Rowles, the music picks up speed thanks to the insistent trumpets before dropping down to tolling piano chords.  The rhythm section revives the "groove" and the ensemble pushes forward even as the brass and reeds are playing the long, slow, phrases from the opening. Halfway through the 11:39 track, the trumpet of Kenny Warren steps out of the once again diminished ensemble, creating a solo that is filled with quick runs. The brilliance in the arrangement is how the arrangement frames the solo with occasional full-on blasts from the assembled multitude before all drop back. Yet, they all jump back in leading to the close where various voices recite Maya Angelou's poem that the track took for its name.

Give "Both Are True" the time to infiltrate your mind, take the time explore the melodies and how the sections move in and out, how the soloists use their time in front so intelligently, and the seeming infinite colors the Webber/Morris Big Band creates.  This music lives, breathes, and, in the long run, lifts one higher.

For more information, go to angelamorrismusic.com/bigband/.

By this time, you should know the name and the voice of Luciana Souza.  Born and raised in São Paulo, Brazil, Ms. Souza actually began her career at the age of three (!) when she recorded a radio jingle. She was quite busy in the advertising world through her middle-teens and soon moved into the world of entertainment. She came to the United States, studied and rtaught at the Berklee School, then earned a Master's Degree at The New England Conservatory of Music, and also taught at the Manhattan School of Music. Ms. Souza's list of recordings is impressive, not only for the 12 releases under her own name (most on the Sunnyside label) but also for her collaborations with artists such as The Yellowjackets, Ryan Truesdell Gil Evans Centennial Orchestra, Bobby McFerrin, the vocal quartet MOSS, Herbie Hancock, the Maria Schneider Orchestra, and more. 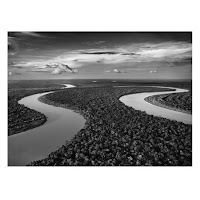 Among the "more" is composer-arranger Vince Mendoza––she appears on his 2011 album "Nights On Earth." In 2017, Ms. Souza and Maestro/ arranger Mendoza joined forces with the WDR Big Band Köln for "Storytellers" (Sunnyside), an album and concert celebrating great Brazilian songwriters. Over the course of the 10-song program, one hears music from Ivan Lines, Edu Lobo & Chico Buarque, Gilberto Gil, Djavan, Guinga, Chico Pinheiro & Tiago Costa pone piece each from Ms. Souza, Mr. Mendoza as well as two pieces from Antonio Carlos Jobim.  In the liner notes, the singer writes “Matita Perê” is at the center of this recording. It is Jobim’s tribute to the vast and relentless presence of nature in Brazil". Composed in 1972 at a time when Brazil was going through martial law, censorship, and the Right Wing's consolidation of power, the piece celebrates the greatness of the country and its vast ecological power––while the lyrics are quite abstract, the music is extremely powerful (too bad there is no English translation in the liner notes).

The album moves between lovely ballads, such as Lobo/Buarque's stunning "Beatriz" (with a melody that invokes Stephen Sondheim) and delightful uptempo songs such Lins's "Se Acontecer" (whose tempo suggest Steely Dan circa "Royal Scam" and "Aja").  Mendoza's arrangements utilize the Big Band in intelligent fashion, with the brass and reeds often shadowing the voice, doubling her wordless vocals (as they do on his "Choro #3" which includes a delightful clarinet solo from Johan Hörlen as well as a dancing spot from trombonist Andy Hunter); the band gets to swing and float––check out Ms. Souza's "Baiäo" and how the rhythm sections buoys the flutes while the brass connect with the wordless vocal.

The other Jobim tune, "Choro Coração", is such a gentle piece. Besides the lovely vocal, Karolina Strassmeyer contributes an emotionally rich alto saxophone solo which is followed by a handsome muted trumpet solo courtesy of John Marshall.  Pay attention to how gentle the rhythm section is, especially pianist Rainier Böhm, bassist John Goldsby, and drummer Hans Dekker; smooth but ever-so-enchanting.

"Storytellers" closes with the elegant "Sim ou Näo" (Djavan) where one hears Ms. Souza's voice joined by multiple flutes and supportive brass.  There's a fine flugelhorn from Ruud Bruels and such a gentle sway from the rhythm section that one finds it quite easy to fall under the spell of this special music.  Luciana Souza, Vince Mendoza, and the WDR Big Band Köln are a perfect match and this album is joyful listening in many different ways. Don't miss this recording!

For more information about the vocalist, go to www.lucianasouza.com.  For the WDRBB, go to www1.wdr.de/orchester-und-chor/bigband/ (it's all in German).  For Vince Mendoza, go to vincemendoza.net.