Growing in the 1960s, the "British Invasion" captured my mind and my ears. First, there was The Beatles, then The Rolling Stones, The Who, and on.  Every week, it seemed there was another group from England playing music inspired by American musicians who has been bypassed or pigeon-holed by radio programmers into regional boxes that were hard to break out of.  In June of 1965, The Yardbirds hit Top 40 with "For Your Love"–the British quintet were a blues-rock band known for its excellent support of American bluesman and featuring guitarist Eric Clapton.  But, the group's turn towards "pop-rock" pushed Clapton to depart and join John Mayall & The Bluesbreakers; the group asked session musician Jimmy Page who, in turn, recommended Jeff Beck and, thus, a career was born. 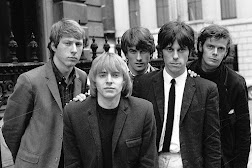 While The Yardbirds pursued Top 40 audiences with their 45rpm "pop" tunes, their albums featured a lot of blues-inspired material some of which leaked onto the radio. The group's raucous rendition of Bo Diddley's "I'm a Man" gave listeners a hint of Beck's prowess but he lasted less than two years in the group, replaced by Page. After an uninspired pair of recordings, including "Hi Ho Silver Linings" (which included a rare Beck vocal), he formed his own group with Rod Stewart on vocals and Ron Wood on bass.  The group released several albums of blues-soaked material but broke up after several years. 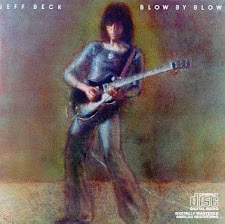 After Beck disbanded his "heavy metal" Beck/Bogert/Appice" (the bassist and drummer from the US band Cactus), he contacted producer George Martin to produce his new instrumental album.  Released in 1975, "Blow by Blow" was a huge success thanks to excellent material, especially the two Stevie Wonder songs, the super funky "Thelonious" and the beautiful "'Cause We've Ended as Lovcrs".  Beck's guitar playing on the latter track is emotionally rich and truly proved he was more than a technical whiz.  A year later, Martin and Beck collaborated on "Wired" which included a number of cuts recorded with keyboardist Jan Hammer who helped to push the guitarist to play with even more abandon. The album includes a stunning take of Charles Mingus's "Goodbye Pork Pie Hat".
The guitarist recorded several albums with Hammer, toured with Hammer's band, and continued to record albums when the inspiration hit. When he wasn't guesting on recordings or doing the occasional tour, Beck would spend the time in his garage rebuilding cars.  He had said on numerous occasions that he had no need to always be in the public eye. Still, his albums continued to sell and he would win GRAMMYs in 2011 for "Best Rock Instrumental Performance" (for "Hammerhead" from the album "Emotion & Commotion") and for his rendition of Puccini's "Nessun Dorma" ("Best Pop Instrumental Performance"  from the same album).
One of the joys of listening to Jeff Beck is he could make the oddest sounds and make them fit into the context of any song. Like Buddy Guy, another guitarist who pushes the envelope, Mr. Beck could make one grimace, laugh out loud, and really smile.  He will be missed but we were so lucky to have him here!!
Here's a live take of "Goodbye Pork Pie Hat":
Here he is shredding "What Mama Said" with guitarist Jennifer Batten:
Back to 1984 and Beck's reunion with Rod Stewart for Curtis Mayfield's "People Get Ready":

Posted by Richard B. Kamins at 1:17 PM No comments: 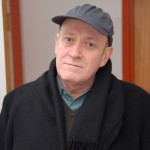 For those of you who do not know Francis Davis (pictured left), he is an exceptional writer, critic, and has won a slew of awards for his music journalism and even a GRAMMY. For years, he hosted the Jazz Critics Poll that appeared first in The Village Voice, moved on to several sites (including NPR) and landing several years ago at artsfuse.org, a web-based online arts magazine based in the Boston, MA area. One of that sites goals has been to pick up the slack in arts coverage due to the loss of area newspapers.  Best of all, the site looks at the many and varied genres/artists that  one is interested in.

Critic/writer Tom Hull has been working with Davis on the poll for years and took over the heavy lifting for 2022.  Below is a series of links where you can see the results Hull collated from over 150 jazz critics and writers plus read his essay as well as one from Francis Davis and finally, the list of Jazz Notables who passed in 2022.  I am honored to be one of the participants and really enjoy reading what the other contributors have chosen. Hope you do as well!

Tom Hull has organized the four links on his web page––check it out by going to https://hullworks.net/jazzpoll/22/.

Posted by Richard B. Kamins at 4:00 PM No comments: 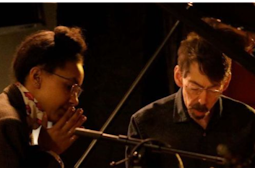 Two years ago, in the initial months of the COVID-19 pandemic, esperanza spalding and Fred Hersch issued a live recording with five songs they recorded in 2018 at the Village Vanguard. The digital-only album was posted on a special Bandcamp page with all proceeds from sales to the Jazz Foundation of America, an organization raising money to assist musicians affected by the international work stoppage. The album was posted for six weeks only (my review is here) and, unless you own it, disappeared from sight (and sound). 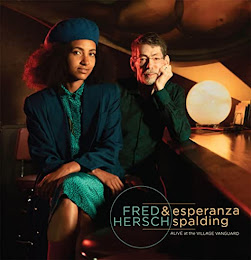 Until now, that is. "Fred Hersch & esperanza spalding: Alive at the Village Vanguard" (Palmetto Records) is available again and, great news, the program has been expanded to eight songs: the "original" five plus "My Little Suede Shoes" from Charlie Parker (first recorded in 1951), Thelonious Monk's "Evidence", and Mr. Hersch's lovely "A Wish" (that he first recorded with Norma Winstone in 2003).  The new "additions" make the album even better (and the earlier version was quite delightful).  Ms. spalding sticks to vocals and she's a great front-person.  Her introduction to Bobby Troup's "Girl Talk" and patter throughout is hilarious but make sure to pay attention the delightful piano that plays along.  "But Not for Me" opens the album and really sets the pace–listen below and just how playful both the lady and gent can be (one can just see lyricist Ira Gershwin laughing along with ms. spalding's joyous interpretation).  Egberto Gismonti would be thrilled to hear the duo dance through "Loro" (the vocalist even stops her wordless jaunt to to say "bless you" to a patron who sneezed).
O, how imaginative and expansive are the duo's performances of the two pieces from Monk.  Actually "Dream of Monk" is Mr. Hersch's reimagining of "Monk's Dream" with original lyrics by the pianist––the vocal is so good especially when ms. spalding is scatting but dig the piano solo. "Evidence" captures the duo in full flight, playfully deconstructing Monk's original theme before the pianist creates a series of inventions around the theme and the rhythm.
How much one wishes to be in an audience when these fine people are playing.  In fact, the duo is celebrating the release with 20 dates starting January 8th and running through February 5th (more information can be found by going to https://fredhersch.com/tour/.). For those of us who can't get to any of the gigs, "Fred Hersch & esperanza spalding: Alive at the Village Vanguard" is an absolute gem!
Listen to how the opening track, "But Not For Me" sets the pace for the entire set:
Brazilian-born saxophonist, composer, arranger, and conductor Gaia Wilmer was already a busy musician in her homeland before coming to the United States to study at Berklee Collee of Music and New England Conservatory (both located in Boston, MA).  One of her teachers, Frank Carlberg, released Ms. Wilmer's US debut "Migrations" on his Red Piano Records label and serves as co-Producer on her new Sunnyside Records album "Folia: the Music of Egberto Gismonti". 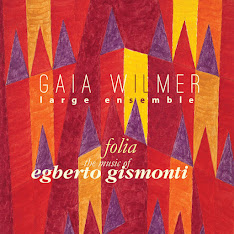 The two-CD set (released on 1/13/23) features her 19-member Large Ensemble plus special guests Gabriel Grossi (harmonica on one cut) cellist Jaques Morelenbaum (on one track), and the honoree Mr. Gismonti (piano on two tracks). One of those tracks with the composer, "7 Aneis", features thunderous piano which during the unaccompanied solo section sounds like Art Tatum interpreting the song of birds but notice how the reed section is so melodic in contrast to the piano.  There's a touch of birdsong in the opening of "Bianca", dedicated to the composer's daughter, but it opens up to a Near Eastern rhythm with a handsome melody atop it. Mr. Morelenbaum, who has recorded a duo album of the music of Caetano Veloso with Ms. Wilmer, joins the ensemble for the lovely "Infancia"––the cellist steps out unaccompanied for a moment in the middle of the song before the rhythm section enters pushing up the tempo. The rest of the piece features various members of the ensemble in a call-and-response with the piano, bass, and drums before they dive into the lively melody!  The last several minutes features pianist Rafael Martini playing a classically-inspired coda that brings the Ensemble back for a short reprise of the original melody. 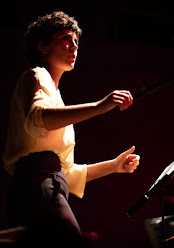 CD two opens with "Lôro", one of Mr. Gismonti's most recorded melodies. The arrangements opens with flutists Maiara Moraes and Aline Gonçalves wrapping their sweet lines around each other before the Ensemble plays an introduction to Mr. Grossi–his lively harmonica solo, reminiscent of the sound of the late Toots Thielemans, is accented by staccato blasts from the reeds and brass. Then, the ensemble breaks into the frolicking melody line.  Later on, Mr. Grossi returns for an exciting romp of a solo.  The composer returns to lead the musicians into "Karatê", yet another romp. Listen to how he and Mr. Martini (on accordion) dance their way through the melody line. The accordion solo jumps off the brass interjections before that section leads the group back into the melody. That song plus "Cego Aderaldo" both come from Mr. Gismonti's 1980 "Circense" album. The latter track opens somberly before the Ensemble breaks into the exciting rhythmic and melodic variations created by the arranger. Different voices step out throughout the performance (there is a splendid flute and clarinets interaction that is joined a minute on by the soprano sax). Guitarist Luciano Camara has a short, handsome, unaccompanied solo before the rest of the rhythm section enters (there's also a momentary vocal exchange between the women and men of the Ensemble right before a spirited exchange between the drums, muted trumpet, and clarinet). 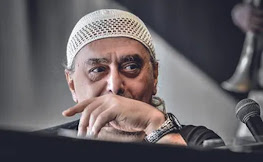 "Folia" closes with "Baiâo Malandro", a piece that opens at a blistering tempo before introducing the amazing melody line that rises high before sliding back down.  After a series of pinpoint twists-and-turns, there's a series of short solos including flute and flugelhorn (Diego Garbin) that grow into a rollicking call-and-response over the rampaging rhythm section.  Drummer Lourenço Vasconcellos (son of pianist Renato Vasconcellos) steps out for just a moment before the Ensemble returns with an exciting close to a delight-filled album.
Gaia Wilmer has crafted quite a wonderful tribute to Egberto Gismonti. She's credited as having "arranged, recomposed, and conducted" the music and the Large Ensemble. While she does not play a note, her arrangements are colorful, imaginative, thoughtful, witty, and most impressive. Chances are very good you've never heard of many or all of the 19 members who comprise her group but a deep dive will show that each one is a busy musician and educator in Brazil and beyond.  Start the New Year with "Folia: The Music of Egberto Gismonti"––the music and performances will make one feel like the sun shining even on the darkest days!
Learn more about Ms. Wilmer by going to www.gaiawilmer.com.  To purchase "Folia", go to  https://sunnysiderecords.bandcamp.com/album/folia-the-music-of-egberto-gismonti.
Hear "7 Anéis" featuring Mr. Gismonti:
Personell:
Gaia Wilmer - arranger, conductorSpecial Guests:Gabriel Gross - harmonicaJaques Morelenbaum - celloEgberto Gismonti - pianoOrchestra:Maiara Moraes - reedsAline Gonçalves - reedsFernando Trocado - reedsRui Alvim - reedsGustavo D'Amico - reedsJoana Queiroz - reedsHenrique Band - reedsBruno Soares - trumpetDiego Garbin - trumpetGilson Santos - trumpetPedro Paulo Junior - trumpetRafael Rocha - tromboneEverson Moraes - tromboneJonas Hocherman - tromboneLeandro Dantas - bass tromboneLuciano Camara - guitarRafael Martini - piano & accordionMayo Pamplona - bassLourenço Vasconcellos - drums
Posted by Richard B. Kamins at 3:59 PM No comments: