Posi-Tone at 25 (and Still Growing)

Posi-Tone Records, based in Los Angeles, CA, continues to carry on in the jazz tradition of Blue Note, Prestige, Mainstream, and other labels from the 1940s-1960s. Co-owner and producer Marc Free gathers great, often young, talent, gives them guidance, a studio, and the big ears of co-owner/ Chief Engineer Nick O'Toole, smart packaging, and tireless promotion. Over the past 15 years (the label opened for business in 1995 but really rebooted in early 2006), starting with the debut album by pianist Ehud Asherie's"Lockout"), Free and O'Toole have recorded and released albums by organists Jared Gold and Brian Charette, trombonists Steve Davis, Nick Finzer, and Michael Dease, saxophonists Doug Webb, Roxy Coss, Ralph Bowen, and Tom Tallitsch, pianists Orrin Evans, Art Hirahira, and Jon Davis, bassists Ben Wolfe and Peter Brendler, trumpeter Jim Rotondi, and so many others. The label has also debuted projects by Evans's Captain Black Big Band, trumpeter Josh Lawrence, vibraphonist Behn Gillece, pianist Theo Hill, and saxophonist Alexa Tarantino. Over the past several years, Free has been putting together artists from the label's roster and creating a series of "studio" groups starting with 2018's "Straight Forward" by the sextet New Faces that combined the talents of Ms. Coss, Lawrence, Gillette, Brendler, Hill, and drummer Vinnie Sperrazza.

Now, in 2020, Posi-Tone continues to do what the co-owners do best––make good music that swings! Happy Birthday to them!

Farnell Newton was born in Miami, FL and then moved to Philadelphia, PA. He is a big man and gets a big sound out of his trumpet. After graduating from Oberln Conservatory of Music, Newton moved to Portland, OR, where he and family still live. Newton has played with lots of people from various genres including Bootsy Collins, Jill Scott, Stevie Wonder, Galactic, and the Portland String Quartet plus he leads his bow funk band, The Othership Connection.  He's self-released a number of different albums and singles on his Portland-based label and signed to Posi-Tone in 2017. His first album for the label, a quintet date titled "Back To Earth", featured his West Coast band on a program that really swung. 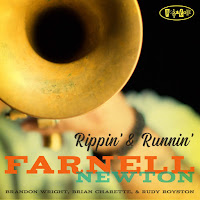 "Rippin' & Runnin'" is his second date for Marc Free; this time, Newton is supported by Brian Charette (organ) and Rudy Royston (drums) while his front-line partner is Brandon Wright (tenor saxophone), all veterans of numerous recordings on Posi-Tone.  The eight-song program features four Newton tunes and one each from Wright, Ezra Weiss, Tom Tallitsch, and Duke Ellington.  The music ranges from the greasy funk of Tallitsch's "Gas Station Hot Dog" (check out the organ and drums–oh my!) to the leader's fast-paced title track to Weiss's New Orleans-soaked "The 5 A.M. Strut" (marvelous trumpet work and it's a pleasure to hear Wright strut his stuff). Charette and Royston are a delight throughout (Mr. Producer, give them their own album, please).

On such a powerful album, the ballads are bound to standout.  Te leader's "Little Bird Rose" moves ever-so-slowly, its sound and feel more aligned to soul/ r'n'b music than to jazz.  The only solo goes to Charette (just his keys and Royston's quiet brush work) while the trumpet and tenor sax read the theme and reprise it at the end.  The program closes with Ellington's masterful "Come Sunday."  Newton arranges the melody section that he plays the opening two lines alone and then Wright joins in on the last; the sax leads the way into the chorus and the trumpet joins for the last line.  The trumpet solo is pure gospel (with a touch of Louis Armstrong and Lester Bowie) while the tenor solo has shades of the blues throughout.  Perfect close to a fun listen!

"Rippin' & Runnin'" might not heal any diseases but chances are quite good you'll feel a lot better listening to this quartet having so much fun making music. Farnell Newton sounds great and his bandmates are top-drawer––all in all, get in the groove and move to this music!

For more information, go to farnellnewton.com.

Here's one of the delightful Newton originals:

To mix old quotations, Idle Hands makes "such sweet music".  There are six sets "Hands" in this Marc Free-organized ensembles; the sextet includes Will Bernard (guitar), Sam Dillon (tenor saxophone), Behn Gillece (vibraphone), Art Hirahara (piano), Boris Kozlov (bass) and Donald Edwards (drums). Like most of Free's "groups", each musician has with recorded for or with the label.  This rhythm section is a true knock-out, Kozlov well-known for his work with the Mingus Big Band while Edwards is best known for his solo albums on Criss Cross plus his  dates with pianist Orrin Evans (the drummer also has worked with the Mingus BB). Hirahara is a stalwart whose Post-Tone albums are quite impressive.  Gillece, who is in several of these label "groups" continues to impress while Dillon is the "kid" here but his elders give him plenty of room to play. Bernard, whose funk-driven albums are delightful, is an excellent voice in this mix. 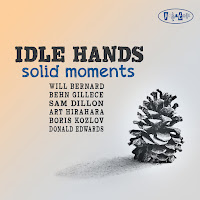 "Solid Moments" is a good name for the sextet's debut.  The 12-song program features, at least, one original from each member plus  pieces composedly Stevie Wonder and Freddie Hubbard. Of Gillece's two pieces, "Maxwell Street" swings in a slippery, funky, fashion and features strong solos from Dillon, Hirahara, and the composer while his "Barreling Through" opens the album in an exciting fashion with a bopping melody and several tempo changes. Bernard's "Silver Bullet" jumps right along with a fiery solo from Dillon and a "cool" solo from the composer. You'll love the bounce in the ensemble's steps on Edward's "Dock's House" – the music moves is such a sinuous fashion thanks to the rhythm section (after all, the drummer was born in New Orleans). Fine solos all around from Dillon, Bernard, Gillece, and, especially, Hirahira whose fingers are dancing with glee.

Two pieces that stand out for this listener are the pianist's (pictured left) "Event Horizon" and Kozlov's handsome ballad "Ashes".  The former rides in on a long melody, well-designed, melody; Dillon gets the first solo with support from the composer's excellent work in the background, Gillece's ringing vibes, and Bernard well-placed chords.  Hirahara's solo piano introduction on the latter track is quite dramatic leading to a gentle, powerful, melody line played by guitar, vibes, and piano.  The rhythm section drops and the piano has a short interaction with the vibes before the band comes back in for Dillon's take on the melody.

Idle Hands are hardly dormant on "Solid Moments"––in fact, they seem to be having an enjoyable time playing together.  This album stands out not only the musicianship but also the overall high quality of the compositions. One hopes that someday this sextet will get to perform in person but, in the meantime, wrap your hands around the album!


Works For Me, one more group organized and named by Marc Free (after one of his favorite John Scofield recordings), is a fascinating blend of veterans and newcomers, women and men. Featuring Alexa Tarantino (alto and soprano saxophones, flute), Caili O'Doherty (piano), Adi Myerson (bass), Tony Davis (guitar), and Joe Strasser (drums), the quintet explores on its debut a nine-song program including seven originals (three by the bassist plus two each by the pianist and guitarist) as well the opening "Jinrikisha" (Joe Henderson) and the closing "Send One Your Love" (Stevie Wonder). 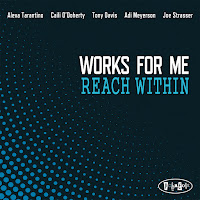 Ms. O'Doherty composed the title track, a medium-fast piece with fine soprano sax work from Ms. Tarantino, dancing drums, and a graceful melody. The pianist, whose 2015 debut album "Padme" (Sunnyside) was quite impressive, is an excellent soloist as is Davis whose guitar phrases truly push the piece forward.  His tune, "Lake Sebago", has a handsome melody played by Ms. Tarantino on flute – listen to the chordal structure of the piece as it's quite intelligently constructed.  Davis also composed "El Gran Birane", a piece that its roots in contemporary r'n'b yet retains a jazz feel.  Thick piano chords and solid drumming support the guitar solo while Ms. O'Doherty creates her adventurous solo over just bass and drums.   Ms. Tarantino really digs down deep – there are moments when her alto sounds more like a tenor sax – for a short yet pithy pair of choruses.

Ms. Myerson's "Your Smile (Keeps Me Sane)" is a lovely ballad with delicate work from the rhythm section plus smart solos from the alto saxophonist and the pianist (pictured left) with the guitar only utilized during the readings of the song's melody.

The quintet delivers a sweet version of Mr. Wonder's "Send One Your Love" (an apropos message for these times). Strasser and Ms. Myerson create a solid cushion for the front line and Davis take full advantage, creating a delightful solo that hints at Wes Montgomery as well as being quite soulful.

"Reach Within" is a good debut with the only caveat that several of the pieces could stretch out a bit more.  That aside, Works For Me is a quintet filled with promise and this writer looks forward to hearing more from each artist over the coming decades.