Riches of The Large Ensemble (Part 1)

2020 has started off with the fears and anger caused by political elections, the international spread of a (possibly) fatal virus, and extreme weather events.  In the midst of all that madness, this will also be a year with a plethora of Big Band and Large Ensemble recordings – here's a look at several that have crossed my threshold.

Saxophonist, composer, and arranger John Ellis and librettist Andy Bragen first recorded collaboration, "Mobro", came out in 2014 telling the world the story of a large garbage barge that sailed up and down the East Coast of the United States being refused (no pun intended) entry into six states.  The barge's owners then tried to dock in Cuba and Belize before returning to Brooklyn, NY, where the 6,000+ pounds of trash was incinerated with the ashes buried on Long Island.  Might not sound like a story deserving of a large ensemble but Ellis's recording stands out for many reasons not the least of which the music is quite impressive and served as quite. spotlight for the voice of Miles Griffith. 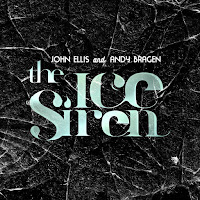 It's taken the duo's third collaboration over a decade for "The Ice Siren" (Parade Lights Records) to come to light. Based on their first effort (2007's "Dreamscape" – never recorded), it actually preceded "Mobro" by six years. Ellis summarizes the story like thus: "The plot is essentially about a man visiting the crypt of his deceased lover, and he goes on a regular basis and, at some point—we imagine it being one of those above-ground crypts, maybe it’s in New Orleans or whatever—it’s kind of open and he takes a look in there, and there’s an elaborate world that he climbs down into and sees. There’s a frozen lake and there’s a moon, and he keeps hearing this voice and the voice is calling him, and he wonders if that’s the voice of his lover; he’s not sure. At some point they meet, and she questions his love for her, and they have this whole back and forth." (Interview from www.jazzspeaks.org). 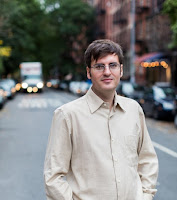 The lovers, voiced by Griffith and Gretchen Parlato, are surrounded by music played by six jazz musicians plus a string quartet (listed below) – that music ranges for Kurt Weill-like rhythms to lovely passages for the string quartet to martial drumming (at times, parade drumming) to mysterious ballads.  The integration of the traditional string quartet with guitarist Mike Moreno and the impressive Marcus Rojas (tuba) shows the maturation process of Ellis as an arranger.  After "Mobro", he returned to this music and makes a number of changes that led to a pair of performances in 2016 before and after the March recording session.  The juxtaposition of Parlato's breathy voice with Griffith's less polished but no less emotional vocal on "She Shows Her Face" makes the tune the most theatrical with great dynamic variations.  Chris Dingman's mellow vibraphone is quite a sharp contrast to the screeching strings on the same track. 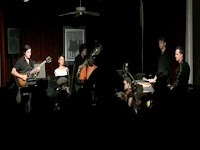 "Little Man" has an insistent rhythm not unlike 1972's Genesis track "Watcher of the Sky", although the newer song has a big change in the middle, an introspective melodic section that pushes th story forward.  "Cold" has that Germanic Kurt Weill bounce thanks to the buoyant tuba yet it also makes several swerves along the way.  The story and the album come to a close on "Entombed In Ice" in which (spoiler alert!) the two lovers are finally reunited.  The music is in waltz time the vast majority of the track but there are moments when one hears a martial beat as well as rubato.

"The Ice Siren" is a fanciful if macabre story with quite the soundtrack. Each voice, musical and human, can be heard clearly and, while there are solos throughout, the music spends much of the time moving the narrative forward.   Listen all the way through then go back and listen to the musicians before returning one more time to hear John Ellis so successfully weaving all the elements together.

For more information, go to www.johnaxsonellis.com/the-ice-siren/.  To learn more about the librettist, go to www.andybragen.com. 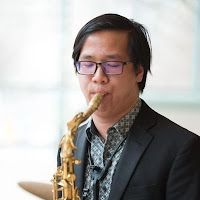 Dennis Kwok, a native of Calgary, Alberta who now lives in Toronto, Ontario, plays all sorts of woodwinds (see below), performs in several different projects, and leads a Tentet, a quartet, and a Jazz Orchestra. The DKJO is composed of 18 young musicians and a vocalist (personnel listed below), all under 35 years old who have been rehearsing and performing Kwok's original music in the Toronto area for the past several years.  In November of 2018, the ensemble went into Gordon Wragg Recording Studio on the campus of Humber College (where Kwok earned his degree) and the results can be heard on the self-released "Windward Bound". 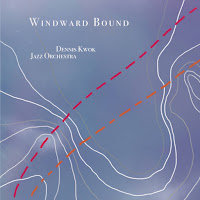 The album is a six-part "Suite" based on the composer's love of sailing (for both pleasure and competition). As a teenager, Kwok spent as much time training and competing as he did working on studying music plus mastery of woodwinds. On this project, he plays oboe, clarinet, bass clarinet, flute, alto flute, piccolo as well as soprano, alto, tenor, and baritone saxophones.  Much of the music has a contemplative feel and the use of Caitly Georgy's wordless vocals bring to mind the role of Luciana Souza in the Maria Schneider Orchestra.  In fact, several of the pieces sound as if the composer/ arranger was influenced by Ms. Schneider's 2000 composition "Hang Gliding", especially "Part I: The Calling."  That should not impede your enjoyment; Kwok utilizes Ms. Georgy's voice as counterpoint to his clarinet and the horn section as gently pulsing colors. Plus, the arranger's use of brass has a tinge of the late Kenny Wheeler. 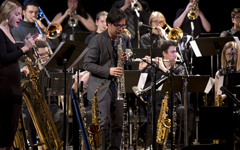 Kwok's flute partners with the bassist Jonathan Weilebnowski for the opening theme of "Part II: Ready, Aye, Ready" which then opens to the piece up to the sections. The leader takes a soaring alto solo while drummer Jacob Wutzke (check out hs 2019 Quartet debut here) fires up the band. The sections drop out as the alto solo turns introspective then return to provide colors as the drummer solos. "Part III: A Flat Boat is a Fast Boat" is a romp, again fired by Wutzke with a solo section that offers a call-and-response for the leader (tenor sax) and Naomi McCarroll-Butler (alto sax).

It is tempting to describe each track but better for the curious listener to create his or her own opinion.  Don't miss the lovely "Part V: Elegy" and Kwok's handsome baritone solo amidst the stormclouds created by the voice and sections.  "Part VI: Red, Right, Returning" brings the album to powerful and satisfying close. The orchestra sounds great under the lengthy and inventive trumpet solo (Marie Goudy) before a quiet coda brings to mind the opening moments of "Part I."

Because "Windward Bound" is a story in song, one should listen all the way through to understand the arc.  Yet, each track stands well on its on.  Dennis Kwok makes an impressive entrance on to the stage with his Jazz Orchestra, many of whose members were fellow students at Humber College and, at least, a majority of his Tentet are members of this ensemble.  Fun, rewarding, enjoyable music, filled with strong melodies as well as promise.

For more information, go to www.denniskwok.ca. 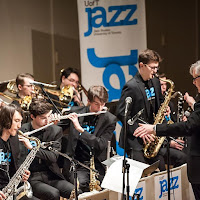 There are a number of institutes of higher education in North America that have first-class music programs.  One thinks of the University of North Texas, the Manhattan School of Music, the Frost School at the University of Miami, and others spread across the map.  The University of Toronto (Canada) is right up there with the best.  Over the past several decades, the school, led by an extremely dedicated faculty, has trained and graduated a great amount of musicians who work in theater "pit" bands, symphony orchestras, chamber groups plus bands large and small.  Like many of the schools listed above, the University has various-sized ensembles that specialize in jazz. The latest release from the US's Northern neighbor belongs to the University of Toronto Jazz Orchestra under the direction of Gordon Foote. 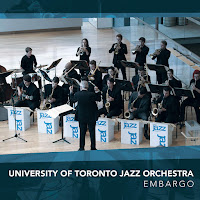 Besides the two "standards, "Embargo" contains a number of strong pieces and excellent musicianship.  Saxophonist Zach Griffin's multi-sectioned "Undiagnosed" has traces of Christine Jensen's music in its themes and features several tempo changes plus a fiery alto and trumpet (the composer and Murphy) duo over a rampaging rhythm that leads to a powerful drum barrage from Jacob Slous as the music rushes to a close but not before slowing down to a lovely coda. Claridge's "Apollo" is a fine ballad with strong work from the rhythm section (especially guitarist Julien Bradley-Combs) and fascinating solos from the composer and trumpeter Ben Frost.

The album closes with the title track; composed by trombonist Vonne Aguda who supplies the sections with impressive harmonies and phrases, the piece also pauses for a lengthy and eventually raucous solo from Bradley-Combs as well as a lively turn by the composer.  Pay attention o the rhythm section, especially the high-powered bass (Evan Grantham) and drums.

"Embargo" makes for fun and fine listening; one would not be surprised to read the names of many members of the University of Toronto Jazz Orchestra in future ensembles as both performers and composers. Kudos to conductor Gordon Foote for his guidance and vision! Give this music a good listen – play it loud!

Here's an overview of the recording:

University of Toronto Jazz Orchestra "Embargo" from UofTMusic on Vimeo.