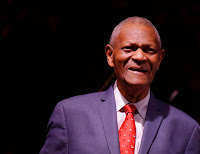 Pianist and composer McCoy Tyner, a native of Philadelphia, PA's amazing music scene, died March 6 2020 at the age of 81.  Thinking about how his presence on the contemporary music scene mirrored my discovery of jazz, it was his collaborations with John Coltrane on "A Love Supreme" and "Impressions" that first turned my ears and mind away from The Beatles and The Rolling Stones, pointing the way to another music, one that also had its roots in African American experience but offered so much more than "She Loves You" and "I Can't Get No Satisfaction". The music created by Mr. Coltrane, Mr. Tyner, Elvin Jones, and Jimmy Garrison (now all passed on) was as powerful to my ears as a large ensemble, each instrument an orchestra unit itself. 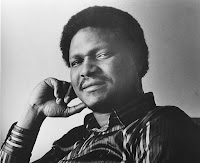 But it was 1972's "Sahara", Mr. Tyner's debut album on Milestone Records, that really turned me on the amazing musician he was.  With a quartet that included Sonny Fortune (alto and soprano saxophone, flute), Calvin Hill (bass), and Alphonse Mouzon (drums, percussion, trumpet), the music soared, roared, cried, and celebrated life in all its amazing colors and sounds.  That album started a string of amazing recordings for MIlestone over the next decade, all led by his powerful piano work, filled with percussive chords and lightning-fast runs that pull the listener along on the most amazing journeys.

A favorite from that era, "Song of the New World" (1973), features the Quartet (with Joony Booth replacing Calvin Hill) string orchestra, a brass section, an oboist, and the great Hubert Laws on flute and piccolo:

Mr. Tyner went on to record many more albums for numerous labels, returning to Blue Note and Impulse in the 1990s and on to Telarc in the early 2000s. Eventually, he started the McCoy Tyner Music label (through Half Note Records) – his final "official" recording is "Solo: Live From San Francisco". Recorded in 2007, the album came out in 2009. He dances his way through 11 tracks, from his own pieces to time-proven standards as well as several John Coltrane compositions.  His sound and ear for blending percussive chords with lengthy solo flurries remains pure and the recording is a true delight. Mr. Tyner performed into the 2010s but had quietly retired to his New Jersey home several years ago

McCoy Tyner's influence on other pianists in uncontested and one imagines his approach to the piano will never really fade away. He gave us so many musical gifts and the world is a much better place for his life!