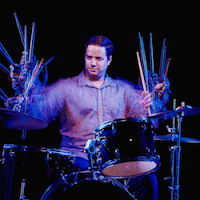 Ernesto Cervini does many things and does them all with panache and dedication.  He's an excellent drummer, a fine composer/ arranger, band leader and co-leader, runs a publicity agency that promotes numerous Canadian-based artists as well as ensembles from the University of Toronto's splendid Music Program, and is an active parent.  Cervini leads a Quartet, a sextet (Turboprop) plus plays in the cooperative trio Myriad3 as well as two other trios, MEM 3 and Tunetown. Plus, he is his sister Amy's go-to drummer when she performs in Canada (he was the original drummer in her Quartet) – he even plays with a Radiohead "cover" band known as Ideoteque. Put succinctly, Ernesto Cervini is always moving forward. 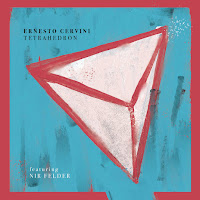 Another trio that the drummer is part of, Tetrahedron, is a marked turn towards fusion and funk. Featuring the thick six-string bass sounds of Rich Brown and the round tones of alto saxophonist Luis Deniz, the ensemble creates a powerful sound.  Before recording its debut album, Cervini invited another good friend, guitarist Nir Felder, to join the trio.  The group's self-titled debut album is now available from Anzic Records and its powerful grooves and ability to also play with great gentleness will lift you from your seat.  Opening with the standard "Softly, As In a Morning Sunrise", with its solo bass, flamenco-influenced introduction, the foursome soon moves into a free-flowing jam where the guitar and alto sax weave in and around each other while the rhythm section creates a raucous background. The album's other non-original, "Angelicus", comes from the pen of Vince Mendoza – the piece begins with a lovely solo electric guitar introduction before moving into a gentle ballad.  Deniz's solo stands out for its sweet tone and emotional content.

The other tracks run the gamut from deep grooves of "Stro" (composed by Cervini in honor of then-Toronto Blue Jays pitcher Marcus Strohman) to the barn-burning "Summit Song" (from alto sax great Bunky Green), a piece that alternates from speaker rattling grooves to a fiery guitar solo to a bluesy and swinging alto sax solo.  The aptly-titled "Forward Motion" (composed by the bassist) charges in on a guitar-drums duo – when Brown's running "walking" bass line enters, the song skips along from its fine melody line into strong solos from Deniz and Cervini. The prettiest track, "Wandering", shows just how nicely the quartet can present a lovely melody and fill it with emotional strength, longing, and intelligent interaction.  Deniz is, again, the main soloist; pay attention to how he raises the intensity and then listen for his interaction with Felder.

"Tetrahedron", the album, closes with the high-powered "The Sneaky Two" – the power generated by the bass and drums may remind some of the work Billy Cobham created in the late 1970s.  Yet, for all the electric excitement, there's also subtlety and great dynamic variation.  Ernesto Cervini continues to make great strides on the contemporary music scene, getting and holding one's attention with his myriad creative projects. His music searches, probes, explores even as it swings, sways, rocks, and dances through your mind.  Kudos as well go to bassist Rich Brown whose underpinning and inventive solos make this album even more enjoyable.

To find out more, go to www.ernestocervini.com.

Here's a live version of "Stro":

Just like Ernesto Cervini, trombonist Nick Finzer has his hands in many pies.  He's not only a first-class musician but also a composer, arranger, educator on the music faculty of the University of North Texas, produces an educational online course for aspiring musicians, has written a book for budding trombonists, heads his own label (Outside In Music),  co-hosts a podcast, and performs with the Anat Cohen Tentet and Postmodern Jukebox.  For the past seven years or so, he's performed and recorded with a core group of musicians that include Lucas Pino (tenor saxophone, bass clarinet), Alex Wintz (guitar), Dave Baron (bass), Jimmy Macbride (drums), and Glenn Zaleski (piano). That ensemble has been featured on three albums with one release on Origin Records and Posi-Tone Records plus two newer albums on Outside In. 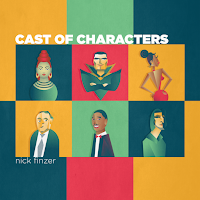 "Cast of Characters" is the group's third album for Finzer's label and continues in the path set by 2017's "Hear and Now". That recording simultaneously looked at the past in jazz (pieces by Duke Ellington, Herbie Hancock) while commenting on the present ("Race To The Bottom", "We The People", and "Dance of Persistence").  The new recording looks at societal archetypes from the past and present (Sorcerer, Brutus, Weatherman, Duke, Venus, and The Guru) and makes musical comments about each.  This focus allows the music to move away from certain expectations and, to these ears, frees it up.  Opening with "A Sorcerer (is a Myth)", the music thunders in on  powerful piano intro into a quiet melody shared by trombone and tenor sax; the rhythm section kicks in and the piece moves forward on a funky yet insisted groove into a smartly-etched theme shared by the horns and guitar before jumping into the leaders solo. Macbride, who seems to be ubiquitous these days, really kicks the music along while Baron keeps the foundation steady.  Pino's tenor is a good foil to the smooth sounds of the trombone and he creates an adventurous solo.

The two pieces that follow, "Intro to..." and "Evolution of Perspective", set up an counter conversation. There are three "Intro to..." so they serve as prologue for the longer tracks that follow.  "...Perspective" is a high-powered post-bop piece that whisks the listener away into a fast-moving vehicle. Wintz's solo jumps out of the speakers leading into Zaleaski's romp across the keyboard.  The rhythm section act like the Acela on an open track, zipping forward.

"Patience, Patience", which follows "Brutus (The Contemporary)" and precedes "A Duke", is an handsome ballad that opens with Pino, on bass clarinet, stating the theme and Finzer playing harmony and counterpoint.  Baron's bass solo is quite melodic with quiet guitar, piano, and brushes as accompaniment.  Later in the program, "You'll Never Know (The Alternative)" has a similar feel with melody shared by trombone, guitar, piano, and bass clarinet – more up-tempo, the music dances atop a cushion provided by lively bass and drums.  "The Guru", the penultimate track on the album, also has an excellent melody shared by the front line yet do not overlook the excellent drum work (right from the opening hand drumming) of Macbride. The album closes with the short anthem "We're More Than The Sum of Our Influences"; Finzer gets directly to the point in the 73-second epilog while reminding us of all the different personalities we meet and we can be during our lifetime.

You can make up your own mind as to the narrative Nick Finzer creates on "Cast Of Characters" but there's no argument that the music sings, roars, romps, sighs, and is emotionally rich.  The sextet has played together numerous times live and in the studio; that comfort allows the leader to challenge them with his compositions and they respond with creativity!

For more information, go to www.nickfinzermusic.com.

Here's the group in the studio: 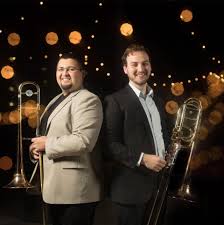 Trombonists Altin Sencalar (left) and Chris Glassman (right) first met in 2017 as Graduate Assistants at Michigan State University.  They both studied with trombonist Michael Dease and bassist Rodney Whitaker; two years into their studies, they went into the studio with Dease as producer (and sometimes, participator) plus Whitaker in the rhythm section along with Addison Frei (piano), Zach Adelman (drums), and, on six of the 11 tracks, Nathan Borton (guitar).  The results can be heard on the duo's self-released debut album "Realization" which features a program of songs composed by influences such as J.J. Johnson, John Coltrane, and Herbie Hancock plus originals from the co-leaders and one "standard", "Nobody Else But Me", the Jerome Kern-Oscar Hammerstein II tune from "Show Boat". Dease appears on the opening track, Glassman's "D is for Dastardly", and shares solo duties with the co-leaders.  The composer's bass trombone solo sets the pace (not to mention a delightful low note!) into a swinging, blues-influenced, tune.  A Brazilian feel permeates Sencalar's "In Your Own Head", a track enlivened by Adelman's delightful drumming plus strong solos from pianist Frei, guitarist Borton, and from the composer.  The next cut is a rousing take on John Coltrane's "Impressions"; Frei's arrangement adds harmonies to the statement of the main theme and solos from both co-leaders, Borton, and his own happy romp.  That's just the first three cuts and already you can tell these musicians love what they do.

Johnson's "Short Cake" rolls along on the expressive piano and the fine interaction of the trombonists. Whitaker also steps out of the rhythm section for a delightful solo of his own.  Borton adds Freddie Green-Inspired guitar to "Nobody Else...", strumming pleasantly under the co-leaders reading of the melody then stepping out for a sweet solo.  Fellow trombonist Steve Davis and his arrangement of Hancock's "The Maze" pushes both Sencalar and Glassman into a propulsive take on the tune.  Their call-and-response is a highlight leading into a strong piano solo pushed forward by Adelman's active drumming.

"Realization" is a fine showcase for two young trombonists Altin Sencalar and Chris Glassman; their musical collaboration is also a spotlight for Addison Frei, Nathan Borton, and Zach Adelman, all of whom are beginning to open eyes and ears of listeners around the US (and beyond).  The Sencalar-Glassman Quintet has created a debut album that feels like springtime: clean, fresh, and promising – give a listen!

For more information, go to www.sencalarglassmanquintet.com.