More Guitars in Many Moods and Modes

Anyone with even a casual link to creative music has heard the work of Liberty Ellman but may never have heard of him.  Born in London, England, his family moved to the United States when the guitarist was still in the early grades of school.  Settling on the West Coast, he got involved with artists such as Vijay Iyer, Rudresh Mahanthappa, Steve Coleman as well as hip-hop groups and the San Francisco Mime Troupe.  Ellman made his recording debut with pianist Iyer in 1995 and his first album as a leader, "Orthodoxy", was issued by Noir Records in late 1997. After moving back to New York City, Ellman worked with many artists across the musical spectrum, from pianist Jason Moran to Wadada Leo Smith to Rwandan composer/ vocalist Somi to pianist Myra Melford's Snowy Egret and more; not only did he perform and record with these artists but also mixed and mastered the recordings.  His work with alto saxophonist and composer Henry Threadgill began when he became a member of Zooid in the latter part of 2008; he's now recorded six albums with the Pulitzer Prize-winning artist, all on Pi Recordings. 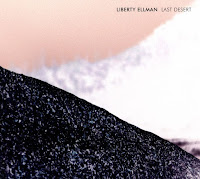 "Last Desert" is Ellman's fifth album as a leader, his first in five years, and fourth for Pi.  He's composed seven pieces for a sextet that appeared on 2015's "Radiate": his guitar, Steve Lehman (alto saxophone), Jonathan Finlayson (trumpet), Jose Davila (tuba), Stephan Crump (bass), and Damion Reid (drums). The album's title refers to the international ultramarathon "4 Deserts", in which competitors race across several of the harshest environments in the world. The album is no competition but a smartly-shaped set of songs that range from the introspective opening track, "The Sip" to the Threadgill-inspired speedy "Rubber Flowers" (splendid drumming from Reid while Lehmann and Ellman spar) to the funky "Doppler" (listen to how the tuba, drums, bass, and guitar bounce off each other while trumpet and alto sax play a percussive melody).  Finlayson, Lehman, and Ellman converse in short solos built off the main melody which as a bit of Thelonious Monk lurking in there. The blend of Lehman's tart sound, the crisp, soaring, phrases of Finlayson, and the percussive melodicism of the leader

The title track is, actually, two pieces that stretch out to over 15 minutes. "I", an episodic composition, opens with a through-composed melody for trumpet lead, tuba bottom, and saxophone counterpoint.  The guitar and drums enter filling out the melody line and providing color. Crump joins to fill out the sound.  The next section moves forwardly rapidly thanks to the active rhythm section while Ellman and Finlayson create powerful solos. Near the close of the piece, Lehman and Rojas play a strong counterpoint to the trumpet before a quick restatement of the initial theme.  "II" starts similarly with trumpet lead, saxophone counterpoint but also tuba and guitar counterpoint.  When Reid and Crump enter, the music falls into a skewed blues pattern while the alto sax and guitar take the lead––the drums beneath the sax solo are explosive, on a rampage, as the guitar and bass play sparse riffs.  Davila steps out alone leading the way to a powerful trumpet solo . There's much to listen to here between the rhythms, the background voices, the tuba and bass support while Finlayson leads the way to the close.

The program comes to a close on the funky "Liquid" with an opening that brings to mind James Brown, Steve Coleman, West African pop, hip hop, and more without being like any of those names and styles.  Again, Reid is the spark that moves the music forward; yet, like the other tracks, the mood and pace change on a dime before the hardy tuba solo.

"Last Desert" is truly modern music. Grown on the fertile ground that Ornette Coleman, Jamaldeen Tacuma, Ronald Shannon Jackson, Henry Threadgill, and others churned up in the 1980s and 90s, Liberty Ellman moves into a newer territory, one where you hear the individual voices in the ensemble weave in and around each others, sometimes joining together, other times spinning away, yet always keeping your attention.  You might not truly appreciate this music on the first or second listen but giving it time and attention will open the amazing worlds Ellman and his cohort are creating.

For more information, go to www.libertyellman.com.

Let the opening track inside around your brain:

Guitarist Wolfgang Muthspiel (born 1965 in Judenburg, Austria) has been active on the international music scene since his student days in Graz, Austria.  He first studied classical music but was exposed to jazz and, over the next three+ decades, he has kept his hands in both genres while expanding into singer-songwriter territory.  While at the Berklee School on Boston, MA in the mid-to-late 1980s, he studied with Mick Goodrick and his first major gig was with the Gary Burton Group.  Muthspiel stayed in the United States until 2001, moving to Vienna that year where he still lives.  Many of his earlier recordings as a leader appeared on his own Material Records label (where you can find the singer-songwriter albums); the guitarist signed with ECM in 2013 as member of a trio with fellow guitarists Ralph Towner and Slava Grigoryan.  In 2014, the label issued "Driftwood", Muthspiel's trio with bassist Larry Grenadier and drummer Brian Blade.  The guitarist has since gone on to release two other ECM albums, both featuring trumpeter Ambrose Akinmusire and pianist Brad Mehldau. 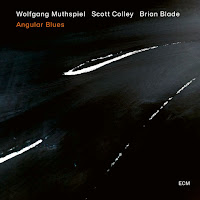 Muthspiel's latest for the label is "Angular Blues"; the ensemble is back to a trio still with Brian Blade and now Scott Colley playing bass. The nine-song program features seven originals by the guitarist plus, for the first time in his ECM career, two "standards", Cole Porter's "Everything I Love" and Gene Paul's "I'll Remember April."  The former, inspired by the Keith Jarrett Trio's version, swings on the power of Blade's delightful brushes and Colley's counterpoint.  Muthspiel caresses the melody and then plays a wide-ranging solo.  Colley also contributes a fine solo––he's one of the more melodic players of the bass––all the while, Blade dances underneath.  The latter tune, actually, the final track, has a lively Caribbean rhythm under the guitarist's playful reading of the melody; Colley solos first over a steady beat and quiet chords.  Both he and Muthspiel stay close to the melody for their solos plus there's a lengthy rubato section that may remind some of Marc Johnson's "Bass Desires" group (John Scofield, Bill Frisell, and Peter Erskine) for ECM 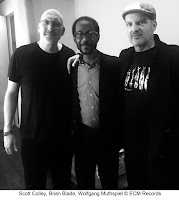 The opening three tracks feature the guitarist on nylon-string acoustic.  "Wondering" starts the album, an up-tempo tune that shows just how well the rhythm section interact with the softer guitar. The title track follows, a rambunctious piece with impressive interaction, excellent use of the bass as counterpoint, and a stop-and-go approach in the early minutes before opening to an expansive guitar solo and another excellent solo from Colley.  Listen to how Blade interacts with the guitarist during his solo and how both he and Muthspiel frame the bass solo.  The final acoustic guitar piece is the lovely "Hüttengriffe"' its folk-like melody and gently county-western strolling rhythm pulling in the listener and asking nothing more than total attention. 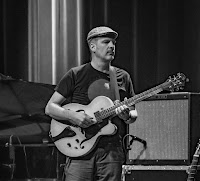 The remainder of the program features electric guitar and each track offers new delights.  Look out especially for the rapid-fire "Ride" for the loping melody and Blade's super brush work.   Also, check out "Kanon in 6/8", a trio romp that features sparkling guitar work (involving subtle looping) and "Kanon in 5/4" which is a solo piece for electric guitar.  One can certainly hear Muthspiel's classical training throughout the piece; he's playful and even ebullient at times but always quite melodic.

"Angular Blues" is a delight-filled album from the trio of Wolfgang Muthspiel (leader), Scott Colley, and the always masterly Brian Blade.  The usually pristine ECM sound allows the listener to hear each musician and their glorious interactions are an integral part of what makes the recording so enjoyable.  Check it out!

For more information, go to www.wolfgangmuthspiel.com.

Here's the Trio on the Cole Porter tune:


Guitarist and composer Jeff Swanson, a native of Indiana and graduate of Northern Illinois University (located in DeKalb, IL), has been based in Chicago for the better part of the past 10 years. He's performed and recorded with saxophonist Caroline Davis and drummer Charles Rumback (in the trio called Whirlpool) plus formed the quartet Living Bridge (you can find albums by both groups on bandcamp.com). Swanson has also toured with many of the area's more progressive jazz bands.  In 2018, he released his debut album as a leader on his own Bace label––titled "Case-fitter", the recording featured an octet including saxophonists Greg Ward and Dustin Laurenzi, trumpeter Quentin Coaxum, drummer Greg Artry plus Fender Rhodes player Paul Bedal. 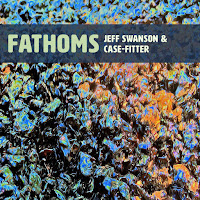 Bedal and Artry are part of Swanson's new album, "Fathoms" (Bace), now featuring electric bassist Matt Ulery and taking the group name from the title of the guitarist's debut album.  Ward and Laurenzi show up on four of the 10 tracks.  Swanson's music takes elements of jazz, blues, prog-rock, rock, and more, to create textures that catch the ear even as they make you want to dance.  What one should notice immediately is these songs, all composed by the guitarist, have strong melody lines, even, as in the instances of "Replicant" and "Let The Children Play", the group is thrashing away; that latter tune has an excellent intro featuring Ward's alto in the lead.  There is a flow to Swanson's phrases when he is soloing while his arrangements for the expanded group on the four songs give the saxophonists the opportunity to stretch out. The opener, "Gaussian" (named for a friend), introduces the "prog-rock" from the get-go with the OP-1 synth (played by the guitarist) supplying strings.  Artry and Ulery really lock in on the track, really pushing the song forward as they create a cushion for the guitar solo.

There are less intense moments scattered throughout the program such as the insistent "Roads", "Elisha" (with a guitar solo that starts quietly and picks up slowly), and the medium-tempo blues "The Accutron" (which also has several ballad sections that Ulery and Swanson use to begin their solo)s. Bedal takes the lead on "Fyra", first with an unaccompanied section that opens him interacting with Ulery and Artry while the leader creates eerie noises in the background.  "Tre" is a handsome ballad with a long opening section in which Swanson sticks close to the melody before Ulery's melodic bass solo (the only person to get a solo on the track). 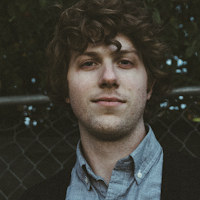 There's more than a touch of West Coast funky swing on "Färvel" with the drummer's clicking sticks and the bassist's thumping bottom notes. Swanson's intense solo stands out as does Ward's romping spot. As the climax, the band drops the volume quickly and reprises the opening. On the afore-mentioned "Let The Children Play" (the track that closes the album), Swanson's guitar work and subsequent solo evokes sonic images of both Jimi Hendrix and Vernon Reid.

"Fathoms" is one of those albums that dances across so many musical genres that the smartest move is to just let it rip through your speakers at a high volume and enjoy the ride.  What fun!

For more information, go to www.jeffswansonmusic.com.

Here's a track with the saxophones: