I first heard vibraphonist and composer Chris Dingman when he was a student at Wesleyan University around the turn of the 21st Century. He studied with Anthony Braxton, Jay Hoggard, Pheroan akLaff, and others as well as played in student ensembles.  The California native then attended the Thelonious Monk Institute of Jazz Performance (now named for Herbie Hancock) where he was exposed to and played with numerous artists such as Jason Moran, Stefon Harris, Jimmy Heath, Vince Mendoza, and many more. In late  2005, he was part of an ensemble that toured Vietnam and the Far East under the auspices of the United States State Department getting to play with Hancock and Wayne Shorter. Since 2007, he's lived in New York City where the vibraphonist has worked and recorded with fellow Wesleyan grad Steve Lehman, trumpeter Ambrose Akinmusire, John Zorn, Fabian Almazan, Jen Shyu, and Professor Braxton (among many others).  Currently, he's part of the Envisage Collective and has a duo with vocalist Miriam Elhajli plus leads his own Trio. 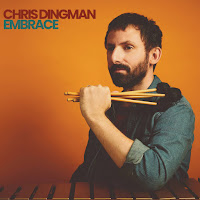 His third album as a leader, "Embrace" (self-released), features bassist Linda May Han Oh and fellow Wes grad Tim Keiper (drums, percussion). Rest assured, it's one of the most beautiful albums you'll hear this or any year, filled with lovely melodies, splendid interactions, and hypnotic sounds.  In the past few years during which time Dingman's father took ill and subsequently died, the vibraphonist has brought his music into hospitals and a hospice where the sounds became part of therapy. Several of the pieces in this nine-song program come from that (the opening "Inner Child" with its music-box vibes sound, "Ali" and its oh-so-gentle circular melody and backing), and the ethereal "Forgive Embrace") – Dingman has another project filled with pieces he played for his father, a five+ hour collection of improvisations, that will be released as an album later in 2020. 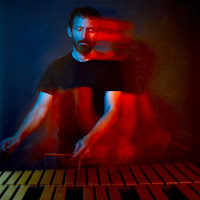 There are also pieces that dance forward with glee. "Hijinks and Wizardry" has a hummable melody played over the melodic bass lines of Ms. Oh and Keiper's splendid brushes strutting on his snare drum and caressing his cymbals. The drummer leads on "Find a Way" creating a skipping beat that the bass supports and that the vibes flow atop. After a handsome bass solo, Dingman and Keiper push each other to a higher level before bringing the song to gentler close.  "Goddess" has a similar feel thanks to the close mics on the drums which, at times, push Keiper to the front (listen below).  The program closes with "Folly of Progress" which jumps from the speakers on the throbbing bass line and martial drumming plus Dingman's powerful solo.(

Listening to "Embrace" reminds one how much fun it can be to get lost then found in a musical experience.  The music that Chris Dingman, Linda May Han Oh, and Tim Keiper create alternately whispers and shouts out to to the listener to loosen the fears and worries that the world piles up on the doorstep, find a friend or group of friends, share these sounds, and celebrate life and community.

For more information, go to www.chrisdingman.com.   The trio, with album producer Keith Witty (also a Wes grad) standing in for Ms. Oh, appears at the Jamaica Center for Arts and Learning in Queens, NewYork (514) and at Firehouse 12, 45 Crown Street in New Haven, CT (5/15). 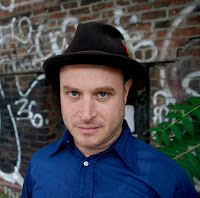 For over three decades, drummer Ben Perowsky has performed with artists from multiple genres, from Rickie Lee Jones to John Cale to James Moody to Iggy Pop to Joan as Policewoman as well as his father's big band (and many more).  He's co-founder of the fusion-jazz ensemble Lost Tribe and hs own big band, the Moodswing Orchestra.  He's been playing with organist John Medeski and saxophonist-clarinetist  Chris Speed for almost 20 years; since his move to Woodstock, NY, the trio gets together to "let off steam", forming a group they call RedCred.  They recorded an album's worth of material of songs in May of 2014 – the album is just being issued by the drummer but, thanks to the great playing of the three musicians and the timeless quality of the material, the music sounds fresh. 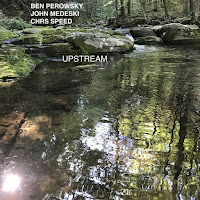 "Upstream" is credited to all three musicians with the drummer taking top billing.  The eight-song program includes several originals by the drummer, one Medeski piece written for his main gig (Martin, Medeski, & Wood), and pieces from Jaco Pastorius, Wayne Shorter, and Miles Davis. Pastorius's "Dania" kicks off the album – and I do mean kick – the trio blazing through the melody and into the solo section. Medeski's bass lines really move and Perowsky gooses the music forward.  Speed's tenor solo rocks over the rhythm section and then steps aside while the organist has his own romp.  One does not miss the bassist as both the organ and drums cover the bottom.

Highlights include Perowsky's "Paul"; while the track is written in honor of Paul Motian, one hears melodic excerpts from The Beatles "I Am The Walrus" written for Paul McCartney. "Face on the Barroom Floor" comes from Wayne Shorter who recorded the piece as a duo with the keyboards of Joe Zawinul on Weather Report's 1985 "Sportin' Life" album.  The trio gives the piece a bluesy edge with Speed on clarinet and Perowsky using his brushes to move between the drum set and the cymbals. The music also has an introspective feel, slowly floating to an quiet close.  Medeski's contribution is the frantically paced "Worms" (from MM&W's 1993 album "It's a Jungle In Here") where the piece was taken at a similar pace and equally as zany.

"Upstream" closes with a ballad, Perowsky's "Love and the Apocalypse", a composition that dates back to the early 1990s.  It bears a bit of resemblance to John Coltrane's "After the Rain" (from his 1963 "Impressions" Lp) as well as the opening four notes played by Speed sound like lie the opening line of Stephen Sondheim's "Send In The Clowns") – there's a bit more dissonance here but the piece is also played rubato so the music doesn't move as much as the sound swells, peaks, becomes quiet, all the while, Perowsky is raising a percussive storm.  Medeski's majestic organ bring the piece and the album to a close after the drums fade.

Ben Perowsky, John Medeski, and Chris Speed – RedCred – make powerful music together, much of which will make you move with a pair of pieces that offer respite from the powerful jams.  "Upstream" was worth the wait as it is timeless creative music.

For more information, go to www.perowsky.com/redcred/.

The trio of Clark Sommers (acoustic bass), Geof Bradfield (tenor and soprano saxophones), and Dana Hall (drums) have worked together in the Chicago area for over two decades, playing with many local and national artists.  Their self-titled debut album as the Clark Sommers' Ba(SH) Trio, was issued by Origin Records in 2013 – the name comes from the first letters of each musicians last name plus the lower case "a" to create a word one could associate with music (it's fine though this trio certainly knows how to create dynamic variation in its sounds). 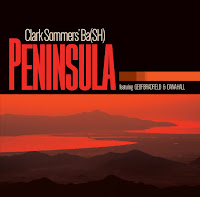 Ba(SH)'s second album,"Peninsula" (Outside In Music), moves in a similar path to its earlier album. Produced and composed by the bassist (the 2013 date had three pieces by Bradfield plus one each from Thelonious Monk and Billy Higgins), one can sense from the onset here are three musicians who listen, react, interact, and share a vision. Because Chicago has been each man's base for so long, it's hard not to hear the influences of tenor sax great Von Freeman in the post-bop trajectory of pieces such as "Goes Around" and the fiery "Disambiguation" that closes the album. There's a trace of John Coltrane and Coleman Hawkins in Bradfield's sound but his singing tone belongs to him alone. Note the simplicity and power of the melody of "Morning Bell" and how the saxophonist navigates the powerful rhythmic flow from the bass and drums.

Hall's sensitive brush work stands alone at the top of "The Forgotten", moving into a bolero rhythm with the addition of the bass before the soprano sax leads the listener on a meditative journey.  There's a touch of a Middle Eastern melody in saxophonist's winding solo phrases while Hall and Sommers push and dance beneath. One gets a sense of intimacy that permeates the music as if we are right there in the room as the trio is playing.  "Maybe Never" starts quietly, increasing in intensity as Hall pummels and phrases behind the powerful tenor sax lines and the foundational bass lines.  "Hope Dance" moves between a blues pattern and rubato to great effect – Bradfield's husky tone, Sommers' counterpoint bass, and Hall's gut-bucket drumming, all combine to draw one in to this   forceful performance.  Pay attention to the skittering drums alongside the melodic and conversational bass solo before the close of the track, with Sommers leading Bradfield back in to join him on a repetitive melodic fragment as the drummer rumbles and...yes...bashes beneath them.

One could put "Peninsula" on repeat and hear something new each time. Clark Sommers' Ba(SH) plays spirited music that refer to its predecessors yet is firmly situated in the here and now.

For more information, go to www.outsideinmusic.com/artistsandreleases/2020/3/4/clark-sommers-bass.