Guitarist, composer, arranger, and occasional vocalist Joel Harrison is certainly s musical polymath, taking his guitar and songs into many genre-blurring areas.  His guitar can squawk, squeal, dance, fly, and be gentle all in the cause of telling a story.  His musical adventures in North and South Indian music, country music, film scoring, Americana, the music of George Harrison (no relation), classical music, etc, has opened his creative mind and opens the listener's mind to the endless possibilities in music 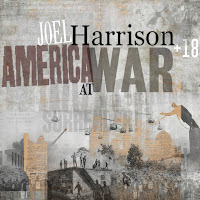 In 2013, Harrison released "Infinite Possibilities" (Sunnyside Records), his first foray in large ensemble writing (all tolled, 23 musicians including two vocalists) and, now, seven years later, his second effort for his large ensemble is here."  America At War" (Sunnyside) posits Harrison in the midst of 18 musicians plus one guest (Ned Rothenberg on shakuhachi for one track).  These compositions take their inspirations from the composer's father's experiences at the end of World War II ("My Father in Nagasaki"), a former President's assertions to his country that Saddam Hussein was preparing chemical weapons ("Yellowcake"), the composer's praise for people who not only fight our wars but also those who fight for peace ("Honor Song"), and the 1963 "March on Washington", the march for "Jobs and Freedom".  Some of the music is angry with solos that tear across the sound spectrum (trombonist Curtis Hasselbring and tenor saxophonist Jon Irabagon on "Yellowcake"). "Gratitude" takes a quieter approach, a soulful tune that not only takes into accounts the composer's recovery from a traumatic brain injury but also the people who work with soldiers dealing with PTSD (Ingrid Jensen's trumpet solo rising out of the collective ensemble is quite handsome). The quiet vibraphone phrases of Wilson Torres takes the piece to its gentle conclusion.

Harrison composed all nine tracks save for Tom Waits's "Day After Tomorrow" (from 2004's "Real Gone" album).  The guitarist sings the plaintive melody whose lyrics tell the story of a young soldier from Illinois (Rockford, to be exact) writing home to his wife from the battle front. While there are no solos, the background is stunning in its support in how the sections frame the voice, capture the emotion, and advance the melody.

The program closes with the pointedly titled "Stupid, Pointless, Heartless Drug Wars"––the composer points his finger at how the casualties of this long and senseless battle, the prisoners, the poor, the various communities, the children who suffer from their parents addiction, have such a poor survival rate. Instead of education and support, those who command choose to incarcerate and, upon release, let the freed prisoners swing in the wind.  There are those who will say "if you mess with this s**t, you deserve the consequences" but the U.S. is a country of second chances a beast, for those who can afford it), where rehabilitation can be a path to a positive life.  As the music progresses, Harrison's arrangement becomes more claustrophobic, angrier, and the conclusion is unsatisfying.  Note the powerful alto saxophone solo from Ken Thompson as well as the muscular work of bassist Gregg August and drummer Jared Schonig.

"America at War" pokes the listener, pushes to make one more aware of the costs that wars have on society, and prods one to speak out in the face of jingoism and nationalism. Joel Harrison + 18 is a formidable ensemble, an assemblage that can roar, can purr, can get you of your chair (and stupor). Yes, this is emotional music, the song titles are provocative, the playing often acerbic––music that demands a response.  In this time of societal isolation, think on these topics and see how you might change.

Here is the substantial opening track:

The Chicago Yestet, the brainchild of trombonist and composer Joel Adams, a veteran of the Woody Herman Orchestra as well as the Chicago music scene, is a unique large ensemble.  The band, in existence for a dozen years, includes three saxophones, two trumpets, two trombones, guitar, bass, drums, a vocalist plus a spoken word artist.  Their music combines elements of jazz, r'n'b, hip hop, and more with messages that speak about current issues and the age-old topic of love.  The ensemble, listed below, is composed of musicians who are active throughout the Chicago area plus lead their own groups. 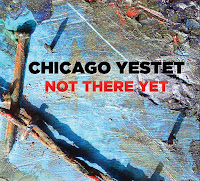 The band's third album, "Not There Yet" (self-released), take sits name from the opening track, a funky tune that may remind some of Curtis Mayfield (especially the muted trumpets in the opening section). Keith Harris's rap speaks on the relationship beween black people and the police––the title refers to the fact that, since the Civil Rights Acts, African American have been granted entry into American Society but only so many and only so far.  Vocalist Maggie Burrell takes over from Harris yet her soulful vocal picks up the topic. The band is musical sympathetic but one is surprised on initial listening by Adam's highly amplified trombone solo ("megabone").  Yet, his harsh voice is in keeping with the lyrics.  Bassist Clark Sommers and, especially, drummer Xavier Breaker stoke the fire throughout. The all-instrumental "Moment of Truth" opens with a passionate statement from Geoff Bradfield (tenor sax) before the rest of the musicians enter.  The melody is developed by the section before Russ Johnson grabs the lead. Listen to how Breaker leads the band forward, taking a powerful as everyone vamps. Close to the end, Bradfield returns for a short but fiery solo.


Ms. Burrell's voice rides the waves of sound on "So It Goes", a multi-sectioned piece that, at times, resembles the music of the band Chicago as well as Isaac Hayes "Theme from Shaft." In the middle of the track, pianist Stu Mindeman (most recently with Kurt Elling as bassist Sommers is now) takes off on a fine solo. The ensemble hits hard on Adams's arrangement of John Coltrane's "Wise One" (from the 1964 Impulse "Crescent" album). Again, it's Breaker who provides the energy while the section writing goes from explosive to flowing melodically. Both Bradfield and guitarist Mike Allemana solo but not until after the sections get their say. 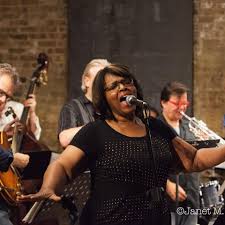 The album contains a song that could be a big hit on the "adult contemporary" charts.  "I've Been Meaning to Tell You" (lyrics by Cherise Thomas plus a rhythmical rap from Harris), at times, sounds as if it would fit right in on an East, Wind, & Fire album, what with the funky backbeat, the chunky guitar chords, and the soaring reeds and brass.  The long middle section allows the band to shows its versatility plus the fine tenor sax solo from Chris Madsen. Both Ms. Burrell and Harris are emotionally "real"; an off-note for some may be that the vocal tells a heartfelt love story while the rap deals with a couple's separation from the perspective of the husband.

The final track, "Anthem for a New Generation of Sociopolitical Reactionaries", is a fascinating duo between the soundbites of President Donald Trump and the responses of Keith Harris.  Depending on your politics, you'll either find the track irresponsible or humorous but it really is a poignant take on what many people on all political sides feels is a divisive politician.  The writing for the band has great power, serving as a bluesy rallying call to the listeners.

"Not There Yet" stands out for its impressive writing, the handsome ensemble playing, the excellent rhythm section, plus the intelligent lyrics.  This music keeps your attention all the way through its 68 minutes; this music begs to heard and seen in person. Kudos to Joel Adams for his great work in bringing this music to light.

For more information, go to www.chicagoyestet.com.