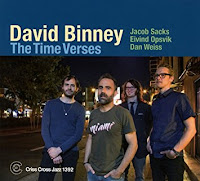 One of the joys of listening to the music of saxophonist, composer, conceptualist, and producer David Binney is that you can always "expect the unexpected."  You know that he always works with top-notch rhythm sections and pianists plus brings in people to join him on the front line who are leaders in their own right.  The "unexpected" parts of this equation are his compositions, arrangements, and improvisations, all of which he does with great intelligence and passion. 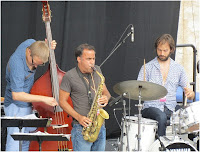 His new album, "The Time Verses", is his ninth as a leader or co-leader to appear on the Criss Cross label (based in The Netherlands). This is the sixth Binney release on the label to feature drummer Dan Weiss, fourth to feature bassist Eyvind Opsvik, and third with pianist Jacob Sacks. These musicians, who appear together on Binney's 2010 "Aliso" album) are Binney's "regular" band and, on numerous Tuesdays over the past seven years, the ensemble that has played alongside him at New York City's 55 Bar. Like Duke Ellington, Miles Davis, John Coltrane, and other artists who maintained "working bands", Binney composes to the strengths of his musicians and knows they are up to the challenges he creates for them.

The recording is a suite of long pieces and short interludes that follows the composer through a "day in his life", a day that includes a gig at "Fifty Five" (celebrated in song near the end of the day and the program).  The album opens with "Dawn", a short (.26 seconds) synthesizer "sound sculpture" that leads directly into "Walk" which puts into music a person's thoughts while walking through a city.  The drums and bass set a good pace but soon the piece takes a turn, still moving forward on the strength of the melody line. A child's voice pops up during Opsvik's arco bass solo and the quartet then moves in a new direction for Binney's lengthy and fascinating solo.

Vocalist Jen Shyu joins the quartet for "Seen"; she sings her lyrics written for an instrumental that Binney composed years ago but had yet to record. It's a lovely ballad with solos from Opsvik (a very melodic bassist) and a powerfully emotional turn from the leader. The gentle vocal helps to calm the emotions as the music comes to rest.  Later in the program, alto saxophonist Shai Golan adds his musical voice (for just a moment) to the thematic section of "Where Worlds Collide", a episodic composition with numerous time changes and shifts plus splendid solos from Binney and Sacks. But, make sure to listen to the melodic and powerful drumming of Weiss.

The music that one hears on "The Time Verses" contains many emotions, compositions that invite joyful interactions as well as thoughtful solos, and beautifully constructed melodies.  Since his recording debut in 1989, David Binney has matured greatly as a person musician, composer, arranger, producer, and bandmate.  Arguably, he is one of the finer contemporary composers in the creative music community. His albums bear repeated listenings , challenging the eager listener on multiples levels.

For more information, go to www.davidbinney.com.

Here's a taste of this fine album: 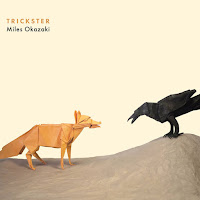 Speaking of sonic delights, one should partake in a deep drinking in of  "Trickster", the new album from guitarist and composer Miles Okazaki and his first for Pi Recordings (although he has participated on numerous recordings for the label). On initial listen, you cannot help but hear the influence of saxophonist Steve Coleman, not only because the guitarist has worked with the MacArthur Fellow for the past eight years alongside the rhythm section of Anthony Tidd (electric bass) and Sean Rickman (drums) but also the majority of these original pieces, like his mentor's compositions, build their melodies off of the powerful rhythms.  "Mischief" displays a Brazilian Bossa Nova influence while the fiery "Black Bolt" has the intensity of Ornette Coleman's electric music.  The work of pianist Craig Taborn shines throughout, each of his solos goes in unexpected direction, and he also helps to create the foundation for the pieces. Listen to how he and Rickman lock in on the high-powered "The West."

Several of the pieces have a palpable tension; whether it's the gun-shot snare drums on "The Calendar" or the prog-rock funk of "Box In a Box", the music has an edge. The guitarist dances atop the bouncy rhythm section (at times, reggae-like) on the latter track. Also, check out how Taborn creates his solo off those serious rhythms. "Eating Earth" take its time to develop, the slow melody unfolding from guitar and piano lines with Tidd's deep bass notes setting an ominous tone. When the drummer enters, the bassist creates a thick yet nervous bass line for Taborn to slowly maneuver the melody, Okazaki's quiet plucking acting as a second percussionist.

The ultra-funky "Caduceus" close the program, dancing in on a bass line that would not sound out of place on a Bootsy Collins records followed by a funky guitar lick - the piano counterpoint opens the door for the drums and the quartet literally hurtle forward.  The clarity of Tidd's notes mixed with the crackling work of Rickman gives Okazaki and Taborn a deep cushion to trade choruses.

"The Trickster", like the origami figures that grace the album cover art, has many folds and shapes, the music drawing from many influences.  Play it loud, let the low notes of Anthony Tidd's bass rattle your speakers, the drums of Seth Rickman shakes the windows, Craig Taborn's piano notes fly around your head, and the percussive attack of Miles Okazaki dig into your chest.  And, you can dance to it!

Here's a preview of the album: