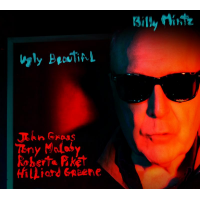 Drummer and composer Billy Mintz ventured into the studio on a late December day in 2015. He gathered his friends John Gross (tenor saxophone), Tony Malaby (tenor and soprano saxophones), Roberta Piket (piano, keyboards, organ), and Hilliard Greene (bass) plus saxophonist Anton Denner (on one track), turned on the tapes and started to play.  The results can be heard on "Ugly Beautiful" (13th Note), a 2-CD set that covers a wide swath of musical territory over 17 tracks that includes one alternate take and an extended version of another track.  Don't get the idea that this is one long blowing session; instead, it's a prime example of musicians stretching, challenging each other (and the listener), thoughtfully engaging with the notated pieces, and creating improvisations that don't adhere to any formula. 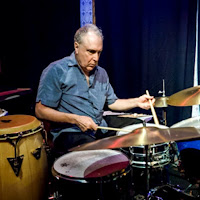 The programming pairs more structured pieces, such as the piano/tenor (Malaby) reading of "Vietnam", with the hard blowing "Dit", whose first version builds on the fire of the rhythm section and opens up to incendiary solos by Gross and Malaby (tenor).  The alternate take shows up later on Disc 1 - here, Gross and Malaby solo together then drop out to allow Ms. Piket to play a delightful solo (her solo on the first version is excellent as well if a bit more playful).  "Flight" and "Flight" (ballad) are back-to-back, the first version is a swinging romp with stroll solos from the two tenors, piano, and Denner (overdubbed on soprano, alto, and tenor).  The ballad takes a different approach with Malaby leading Ms. Piket into a minimalistic reading of the theme. Without the drummer, the group plumbs the emotional depth of the music to great effect. "Cannonball" is a funky piece with a trance-like rhythm emphasized by Greene's throbbing bass and Mintz's gentle dancing sound.  Ms. Piket's Hammond B-3 solo is a treat as well. The longest track on the first disc, "Shmear"(11:37), opens with a long drum before moving into a fast-paced riff a la mid-60s Ornette Coleman.  Before you get used to that, everyone drops out for a gospel-tinged piano solo.  The pace picks with an energetic pace laid down for the bass and drums for a rollicking piano solo.  Then, the tenors enter one at a time before engaging each other in a spirited conversation. The disc closes with "Umba", a funky piece for Fender Rhodes, Nord keyboard, and drums. 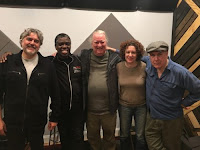 Disc 2 commences with "Tumba"; the minimalism of "Umba" now is expanded to add organ and acoustic piano to the mix and a harder rhythmic pace. The piece takes a decidedly Native American turn with hand percussion setting the stage for a fascinating soprano sax solo over Ms. Piket's expanding chordal explorations.  The exploratory nature of the musicians and these challenging compositions continue to grab attention throughout the side, especially on the Coltrane-influenced tracks "Love and Beauty" (a forceful ballad) and the powerful, medium-tempo, title track.  Greene's double-tracked bowed bass introduces "Retribution"; it's slow pace, whispering cymbals, and foreboding organ sounds take their time to get to the handsome melody line played by the tenor and soprano saxophones. To these ears, the melody line has the richness of a cantorial melody from the early 20th Century.  Following that, "After Retribution", has a similar pace but now the piano and drums carry a more plaintive melody to the tenor saxophones. The piece ends so quietly, you can hear the quintet breathing as one.  The program ends with an extended reading of "Cannonball"; it's as funky as the shorter version, just more room for solos from the saxophonists and Ms. Piket's Hammond B-3.

"Ugly Beautiful" is 2+ hours of music that has so much to recommend purchase by the curious listener.  Take your time delving into the program, listen to how these musician/friends interact, how the compositions fit the overarching themes of the project, not the least of which is the joy of making music.  Music can take us out of the commonplace - Billy Mintz and company give us much to contemplate, so much to think about.

For more information, go to thirteenthnoterecords.com.

Check this video of the band at play (and I mean play)! 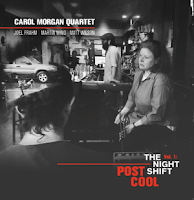 Trumpeter and educator Carol Morgan has a new album "Post Cool, Vol. 1: The Night Shift" (self-released), and it finds her in the company of the three gentlemen who joined her on the delightful 2011 release "Blue Glass Music."  Joining her on the front line is tenor saxophonist Joel Frahm while the rhythm section is the delightful duo of Martin Wind (bass) and Matt Wilson (drums).

The six songs include an original each from the leader and from Frahm plus four standards.  Yet, there is nothing standard about the "oldies."  The program opens with a pleasant jaunt through Horace Silver's "Strollin'".  The tenor solo over the splashy cymbals gives way to a enjoyable trumpet solo.  The bassist creates a splendid melodic solo before the entire band go back to the head.  Wilson pounds and punches the group through the opening choruses of "A Night In Tunisia" before settling down and working alongside Wind beneath Ms. Morgan's jaunty solo.  Check out the "wild" ending and how Frahm wraps his sound around the trumpet melody.  Wilson's brush work sets the pace on Tadd Dameron's "On A Misty Night" with solos from the trumpeter and saxophonist that literally dance with glee.  The Quartet has fun with "Autumn Leaves", taking its time to get to the melody and then imbuing the blues with a deep blues sensibility.  Listen to how Ms. Morgan plays behind the saxophonist through the latter half of his solo before taking off on her own.  Frahm returns the favor in the middle of the trumpet spot, adding harmony as well as counterpoint.

Ms. Morgan's "Night" has a samba feel underneath the handsome melody.  The interaction of trumpet and saxophone on the thematic material is harmonically rich while the melody is ripe for lyrics.  The piece has a "quiet" feel plus a soft and, of course, melodic solo from Wind. When the Quartet returns to the theme, you realize the heart of the song is in the melody that Ms. Morgan created for herself and Frahm.  The saxophonist's "Song For Mom" appears on his 2011 "Live at Smalls" CD - he does not tinker with the arrangement using the same medium tempo and solo order.  Because there is such a strong melodic line, the soloists have much to work with.

"Post Cool, Vol. 1: The Night Shift" from the Carol Morgan Quartet is subtle, melodic, and fun.  Considering the musicians she asked to be part of the project, you should not have expected anything less.

For more information, go to www.carolmorganmusic.com/.
Posted by Richard B. Kamins at 2:29 PM