After a fairly mild February (in the madness that now passes for winter in southern New England), March has definitely come in like a lion.  Actually, more like a marauding polar bear but the calendar reminds us that the Vernal Equinox is almost upon us and, even more important (especially for fans of creative music in CT), the Firehouse 12 Spring Concert series is set to commence.

The opening show of this year, the venue's 10th Anniversary season, belongs to bassist and composer Stephan Crump's Rhombal.  The quartet's debut album came out last summer and made it to numerous "Best-of" lists.  Featuring a front line of Ellery Eskelin (tenor saxophone) and Adam O'Farrill (trumpet), the music is powered by the exciting rhythm section of Crump and drummer Tyshawn Sorey.  The album was recorded fairly early in the band's career and they have been gigging a lot since then so they should be in great form on March 17th.

Here's music to accompany your reading:


Filling out the month will be the Joe Fielder Quintet (3/24) and Trio M (3/31).  Trombonist and composer Fielder has formed a new ensemble, one that features the amazing (and madcap) Jeff Lederer (saxophones, clarinet), Pete McCann (guitars), Rob Jost (bass, french horn), and Michael Sarin (drums).  The band's new album comes out later this month and is filled with exciting performances of Fielder's fine compositions.  Trio M takes its name from its three members, pianist Myra Melford, bassist Mark Dresser, and drummer Matt Wilson. Each member also contributes music and their interactions make for an impressive performance.

The first weekend in April will be quite exciting.  Friday the 7th, it's saxophonist Anna Webber with her "Binary" Trio featuring pianist Matt Mitchell and drummer John Hollenbeck. "Binary" is the name given to the Trio's second album on SKIRL Records which was released on October of 2016.  Wadada Leo Smith's picture is there because on Saturday (4/08) and Sunday (4/09) because he has curated a fascinating event.  Dubbed the CREATE Festival, there will be workshops, seminars, and numerous performances, many of which feature Wadada's music.  Among Saturday's performances are the debuts of his String Quartets Number 9 and 10 as well as his Golden Quintet playing excerpts (on Sunday too) from 2016's "America's National Parks" recording.  More debuts will come on Sunday but many people (including me) are excited about the reunion of New Delta Ahkri, a trio that Wadada assembled in the 1970s with vibraphonist Bobby Naughton and multi-reed master Dwight Andrew.  You can see the whole lineup by clicking here.

April's offerings also include drummer Ralph Peterson's Triangular III Trio on the 14th;  The ensemble (pictured left) features Hartford natives Zaccai and Luques Curtis (piano and bass respectively). Peterson is such a powerful drummer and a strong composer with a great love for the history of jazz.  On the 21st, the Michaël Attias Quartet comes to the venue. Attias is a fine alto saxophonist and composer; this quartet - pianist Aruan Ortiz, bassist John Hébert, and drummer Nasheet Waits - just released its first recording on Clean Feed, filled with impressive interactions and musical conversations.  For this gig, pianist Kris Davis sits in the piano chair.  The last Friday of the month belongs to the Anthony Braxton Septet.  Mr. Braxton, who retired from his teaching position at Wesleyan several years (Tyshawn Sorey takes his place this coming Fall semester), has been touring the world with his many ensembles, performing his operas and other new compositions.  Featured in this group are Adam Matlock (accordion), Dan Peck (tuba), Tomeka Reid (cello) Taylor Ho Bynum (cornet, and the twin harps of Jacqueline Kerrod and Shelley Burgon (Mr Braxton will play clarinet and electronics).  Mr. Bynum, Ms. Melford, and Mr. Hébert return on Saturday to play a concert with a group dubbed the Firehouse 12 Records All Stars. The ensemble also includes guitarist Mary Halvorson, drummer Tomas Fujiwara, trumpeter Nate Wooley, and pianist Carl Maguire.

Dig the sounds of Mr. Peterson and the brothers Curtis:

May starts out with a visit (on the 5th) from the Matthew Shipp Trio.  The talented, opinionated, and forceful pianist Shipp released what he says his final album in January.  If it truly is his denouement as a recording artist (he still plans to perform live as a leader and band member), "Piano Song" (Thirsty Ear) is one of his best.  Joining him will be bassist Michael Bisio and drummer Newman Taylor Baker who also are on the album.  On May 12th, Harriet Tubman, the trio of Brandon Ross (banjo, guitar, vocal), J.T. Lewis (drums), and Melvin Gibbs (bass).  Their new Sunnyside album, "Araminta", also features Wadada Leo Smith, and the collaboration is quite fascinating (hear a track below).  The following week (5/19), the volume might be lower but the music should be just an engaging when the Pete Malinverni Trio takes the stage.  The pianist and composer has not only worked with jazz masters such as Mel Lewis and Joe Lovano but has also served as a church musician in an African American Baptist Church in Brooklyn. May closes out on the 26th with Joe Morris "House of Refreshment" that finds the guitarist in the company of bassist Kim Cass (who in a member of Noah Preminger's Quartet), also saxophonist Jim Hobbs, and drummer Gerald Cleaver.

Here's a healthy slice of music from Harriet Tubman: 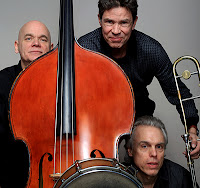 The season closes with 2 shows in June but both will be fascinating.  On June 2, guitarist Brandon Seabrook will celebrate the release of "Die Trommel Fatale", his new album and group.  Not sure yet who'll be sharing the stage but the one song I have heard features a sextet with bassist Eyvind Opsvik and cellist Marika Hughes plus a vocalist and two drummers!  The music is a wild blend of Captain Beefheart, "scream-o", "trance", and more.  On June 9, come help celebrate the 40th anniversary of BassDrumBone, the magical trio of bassist Mark Helias, drummer and percussionist Gerry Hemingway, and trombonist Ray Anderson.  They, too, are celebrating a new album, aptly title "The Long Road", a 2-disk set they self-released late in 2016. Pianist Jason Moran and saxophonist Joe Lovano join them on three tracks each; the music sparkles with musical invention, deep thought, sly humor, and splendid playing.

A new track from BassDrumBone for your enjoyment: