Three by 3 in the Third Month 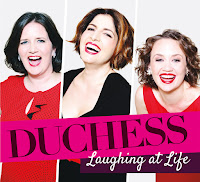 Unless you are a dyed-in-the-wool curmudgeon, your reaction to
"Laughing at Life (Anzic Records), the second album from Duchess  should be one of sheer joy.  The trio of vocalists - Amy Cervini, Hilary Gardner, and Melissa Stylianou - takes its cues from The Boswell Sisters, who recorded and toured from 1925-1936. Equally fine singers and musicians, The Boswells, born and raised in New Orleans, first came to fame on the radio and then toured with bands led by the Dorsey Brothers (Jimmy and Tommy) as well as Bunny Berigan. When each sister married and subsequently started a family, the decision was to split but their influence can be heard in  various "girl groups" of the 1940s including the Andrew Sisters. 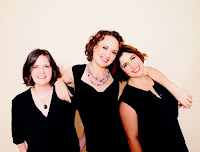 Duchess, with its top-notch band including pianist Michael Cabe, bassist Matt Aronoff, drummer Jared Schonig, plus guitarist Jesse Lewis (on 9 of the 14 tracks), takes to heart the influence of its predecessors and that is to have fun.  They do a pair of songs associated with The Boswells; "Everybody Loves My Baby" features the double-time middle of the original tune and the original "Dawn" (composed by Vet Bosewell) closes the album in soft tones. "...Baby" features the playful clarinet work of Anat Cohen who also supplies the sweet, woody, sounds on "We'll Meet Again."  Trombonist Wycliffe Gordon adds his "growl" to "Creole Love Call" (his arrangement as well) and gives a sweeter touch to the lovely "Stars Fell on Alabama."  Then there's Johnny Mercer's "Strip Polka" which hails from 1942 and was a hit for him as well as for The Andrew Sisters.  The addition of Jeff Lederer's boozy tenor saxophone gives the song its initial boost and the tight 3-part harmony is a delight.  Lederer also adds his powerful sound to "Here's To The Losers" with a solo that raises the temperature on the "cool" vocals (dig the "kicking" final verse).

The trio goes for a more "contemporary" sound (okay, the 1950s and 60s) with such additions as the sweet bluesy sounds of Ray Charles "Hallelujah I Love Her (Him) So" (strong vocal lead from Ms. Gardner) and the easy swing of "Where Would You Be Without Me" from the Anthony Newley - Leslie Bricusse classic "The Roar of the Greasepaint - The Smell of the Crowd".

"Laughing at Life" can be such healthy advice but not always easy to do.  However, this fine album from Duchess is certainly a step - actually a shower of steps - in the right direction. With fine arrangements from producer Oded Lev-Ari, a crackerjack band, plus fine contributions from the guests, this is music that makes one feel good and there is nothing wrong with that at all.

For more information, go to www.duchesstrio.com/welcome. 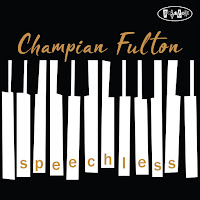 Over the course of the past 10 years, Champian Fulton has proven herself to be a strong vocalist and excellent pianist. She loves to swing, her ballad work is emotionally rich, and is becoming an excellent music educator.  "Speechless" her 8th album and first for Posi-Tone Records, is also her first purely instrumental recording. Featuring the rhythm section of Adi Myerson (bass) and Ben Zweig (drums), Ms. Fulton has a created a 10-song program that is just the right combination of emotion and technique, steeped in the blues and with a healthy dollop of "swing."  The more I listen, the more I hear the influence of Earl "Fatha" Hines on several tracks. Listen to the gentle two-handed attack on the album's first cut, "Day's End", as well as the smart accompaniment of the rhythm section.  There is also a Hines flavor on the recording's only non-original, "Somebody Stole My Gal" (composed by Leo Wood in 1918).  After an introspective opening, the song takes off as if the band members were trying to keep up with Usain Bolt.

There is so much to enjoy here. The rousing "Lullaby for Art", with its hint of Bobby Timmons in the opening melody, builds off the relentless drive of the rhythm section and Ms. Fulton's dancing solo.  The first notes of "Dark Blue" may lead one to believe the song is actually Michel LeGrand's "What Are You Doing The Rest of Your Life" but it's really a slow blues - the piano solo is a wonderful mix of short phrases and long, rippling, lines that dance atop the elemental bass tines and brush work.  She follows that with the uptempo waltz "Tea and Tangerines", a delightful and jaunty romp. The pianist is close friends with alto saxophonist Lou Donaldson; she composed "Later Gator" with his funky blues stylings in mind. It's a "down home" treat and the rollicking piano solo drips with sound of gospel-inflected soul.

By the time you arrive at the final track, "Carondeleto's", Ms. Fulton's tribute to her friend Clark Terry's home town of Carondelet, Missouri, the music has gone through a number of moods and style.    The cut swings with a vengeance and is a pleasing close to a splendid album.  Champian Fulton's previous album, "After Dark", was a tribute to vocalist Dinah Washington and a good one at that. "Speechless" may not have vocals but is a treat from beginning to end with nary a weak cut and a slew of strong solos.  Just let the sounds seep into your brain; I guarantee you will feel better.

Here's a live version of one of the tracks from "Speechless": 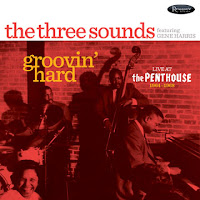 Pianist Gene Harris organized The Three Sounds in 1956 along with bassist Andy Simpkins and drummer Bill Dowdy.  Over the next 17 years, the trio (always with Harris but various drummers and bassists) recorded for many different labels including Blue Note, Verve, and Mercury, backed numerous musicians (including Lester Young, Lou Donaldson, vocalist Anita O'Day and others) and toured incessantly.  The appropriately-titled "Groovin' Hard: Live at The Penthouse 1964-68" (Resonance Records) is a collection of tracks recorded in a club located in Seattle, Washington.  Drummer Dowdy appears on the 1964 sessions while Kalil Madi takes over in 1966 and Carl Burnett in 1968. 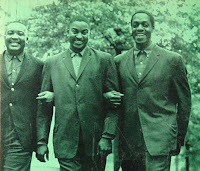 As to be expected from the folks at Resonance, the sound quality is exceptional.  Harris's gospel/blues piano work is in full bloom and you can understand why he had such a fine career.  Yes, he could "get down" but also really loved melody.  At the time of these recordings, trios led by Ramsey Lewis and Ahmad Jamal were very popular, especially with more mature audiences (although Lewis did have hits on the Top 50); the role of these groups were to mostly play clubs where they would entertain people after a long day at work, help the listeners relax and shed the inhibitions caused by the daily grind.  Harris was quite happy to entertain. Pieces such as "Blue Genes" with its infectious boogie-woogie rhythms, the brisk 3/4 stroll of Toots Theilemans's "Bluesette", and the rollicking "Theme from Ceasar and Cleopatra" (note the Afro-Cuban rhythms of Dowdy) would make people sit up and take notice. 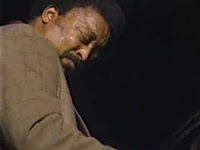 With the exception of Franz Lehar's "Yours is My Heart Alone" at 7:50, the performances clock in at under 7 minutes. But there's plenty of time on each track for Harris (1933-2000) to play excellent solos. He gets your attention on every track, a bit "showy" at times, but never at the expense of melody or the "groove". Simpkins (1932-1999) is not only quite supportive but his counterpoint work is impressive.

"Groovin' Hard" is a delightful musical snack from Gene Harris & The Three Sounds.  The accompanying booklet as well as the video on the Resonance Records website are quite informative; it makes one wish that there was more like this waiting for release (hint hint!)

For more information, go to www.resonancerecords.org/release.php?cat=HCD-2025.  You can read his obituary from the New York Times (written by Ben Ratliff) by going to www.nytimes.com/2000/01/18/arts/gene-harris-66-a-jazz-pianist-who-played-bebop-and-soul.html.