Trio M - Myra Melford (piano), Mark Dresser (bass), and Matt Wilson (drums) - will perform this Friday March 31 as part of the Spring 2017 Concert Series at Firehouse 12.  Collectively, it's the ensemble's second appearance at the Crown Street venue (April 2012) and, overall, the 19th time one, two, or all three have appeared in the Elm City performance space. Each musician is a leader but, when they work together, it's a joy to listen.  Their music blends so many influences, can be "free" or highly structured, with ensemble playing that leads to great solos and songs that tell stories.  It's not always easy for three fine musicians to mesh but these Ms challenge each other even as they support each other.

The Side Door Jazz Club in Old Lyme continues its weekly forays into contemporary jazz with two more great shows this weekend.  On Friday, it's the Donald Vega Trio. A deft pianist and fine composer, Vega is not only a leader but also the 1/3rd of bassist's Ron Carter's Trio.  His most recent CD, 2015's "With Respect to Monty" (Resonance Records), is Vega's investigation lf the music of fellow pianist Monty Alexander.  The recording is a delight from start to finish, not just because Vega is such a fine pianist but for the way he makes the Alexander sound fresh and invigorating.

Mr. Vega and his as yet unidentified rhythm section takes the Side Door stage at 8:30 for the opening set.  For more information, go to thesidedoorjazz.com.

Here's a neat video about the latest album: 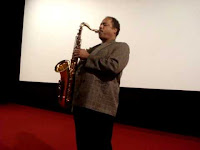 The great tenor saxophonist Ricky Ford comes to The Side Door on Saturday April 1.  The Boston, MA, native, has had a fascinating career starting with his studies at the New England Conservatory of Music in his hometown to his work with Charles Mingus and the Duke Ellington Orchestra (when Duke's son Mercer led the band). Ford has also worked with pianists McCoy Tyner, Abdullah Ibrahim, Mal Waldron, and many others. Plus he has recorded numerous albums for various labels, from Muse Records to the Candid label. Ford has been living i France and teaching in Turkey for the better part of the last decade, leading a big band, and recording with numerous ex-patriates. 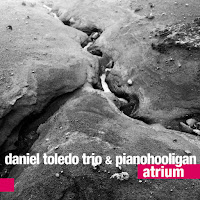 Bassist and composer Daniel Toledo, born in Ecuador, came to the United States to study at the Berklee College of Music in Boston and is now is a full Professor of Music at the Universidad San Francisco de Quito.  He also is the leader of the Daniel Toledo Trio & Pianohooligan.  The ensemble has just issued its second CD, "Atrium" (For Tune Records) - joining the bassist is pianist Piotr Orzechowski (turns out he is the "pianohooligan") and drummer Paul Svanberg.  Mr. Orzechowski is quite an accomplished musician playing classical, "free" jazz, and more throughout Europe while drummer Svanberg is known for his work with pianist Lars Jansson's Trio.

What stands out on this seven-song program of original material (all by the leader) is how melodic this music is and also how interact the trio can be. One can hear suggestions of The Bad Plus, of the Bill Evans Trio, of Keith Jarrett, Chick Corea, but these influences are never overt and disappear on repeated listenings. Pieces such as the title track that opens the CD and the impressionistic "Abridged Perspective" move away from any specific genre into a form of storytelling that eschews technique in favor of thematic material.  The dancing phrases from Orzechowski enliven "Tawny" as do his occasional "earnest", almost classical, riffs he throws into his solo. Meanwhile, the rhythm section does its own dance delightfully in support.  Take notice of how the piano and bass go in somewhat different melodic directions on "Horyzont" during the verse, held together by the steady drums. Svanberg changes his approach under the expansive piano solo, switching to brushes and toying with the beat as the bass bounces gently along.

Introspection takes a back seat on the rollicking "Margins" - the drummer pushes from the opening moment while Orzechowski dances through the melody line.  Toledo keeps a steady pace while the piece drops in intensity picking up just in time for his powerful solo.  Dig the swing of the final cut "Near Focus" and how its bluesy feel opens to a smart melody.  The playful interaction of the trio is so attractive and disarming.

"Atrium" can refer to the open roof of an ancient house or the central chambers of the human heart.  The music created by Daniel Toledo Trio + Pianohooligan is filled with heart and with soul while its openness is so inviting. In a day and age when piano trio music is so abundant, this is a recording to discover and enjoy.

For more information, go to www.dantbass.com/home.

Here's the title track and a link to purchase the entire album: