Large Ensembles North of the Border

Kenny Wheeler (1930-2014) played trumpet and flugelhorn and created an impressive body of compositions that covered a wide swath of contemporary music.  Born in Toronto, Ontario, Canada, Wheeler moved to England in the early 1950s, slowly, steadily, building a career in bands led by Tubby Hayes and John Dankworth. In the 1970s, he worked with various different ensembles, ranging from the avant-garde sounds of the Spontaneous Music Ensemble and the Global Unity Orchestra as well as alongside Anthony Braxton and Dave Holland.  He had a long association with pianist John Taylor and vocalist Norma Winstone performing together and recording as Azymuth.  He recorded numerous Lps and CDs for ECM, starting in 1975 with "Gnu High" and his final recording, "Songs For Quintet", released in 2015 after his passing.  Wheeler also recorded for Soul Note and CAM Jazz.

My favorite recordings of Mr. Wheeler's tend to be the Big Band albums.  His arrangements for brass and reeds have a classical sensibility yet are flavored with the experimentation that was a large part of his life. The original compositions often blend airy melodies with thick section playing, opening up for solos that seem to ride atop the rhythm section like birds gliding on columns of thermals. Best of all, his melodies are well drawn and the music often has a swing the composer/arranger had absorbed the blues arrangements of Count Basie and Duke Ellington. And his ballad pieces often have a wistful feeling, filled with emotion and, occasionally sadness. 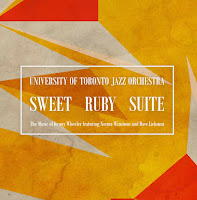 The University of Toronto Jazz Orchestra, Gordon Foote, director, has just issued "Sweet Ruby Suite"(self-released on UofT Jazz) an album dedicated to the music of Kenny Wheeler. Joining the 18-member ensemble for this project is Ms. Winstone and guest soloist, soprano saxophonist Dave Liebman.  The 4-song program includes the 29-minute title track that Mr. Wheeler recorded in 2002 with the Maritime Jazz Orchestra plus three other shorter tracks. The arrangements, all but one by the composer, leave room for contributions by many of the band members as well as Liebman. The multi-sectioned "...Suite" does an excellent job of displaying the UTJO's strengths; those includes the excellent work of pianist Josh Smiley, bassist Victor Vrankujl, and drummer Andrew Miller plus the excellent section work His interaction with Brad Eaton's flugelhorn on "W.W" really shines.  His sweet tone meshes nicely with Ms. Winstone's scat vocals on "Canter No. 1", perhaps named for its loping rhythms -  the piece, arranged by Terry Promane, makes great use of the sections in call-and-response, counterpoint, and harmonies.  She also joins the brass for the melody line on the song which appeared on Mr. Wheeler's final ECM release.  "Winter Sweet", also first recorded with the Maritime Jazz Orchestra, is a lovely ballad complete with strong playing from Marie Goudy (flugelhorn), Conrad Gluch (alto saxophone), and Mr. Liebman.

"Sweet Ruby Suite" shines not only on the strength of the Kenny Wheeler's compositions and arrangements but also the powerful work of the University of Toronto Jazz Orchestra.  Perhaps the presence of Norma Winstone (who also wrote the lyrics) and Dave Liebman gave the musicians extra incentive; they never sound like a "backing band" for the two guests but really as equals.  If you like "modern" big band, the music of Kenny Wheeler, and the work of Ms. Winstone and Mr. Liebman, this is music worth hearing.

For more information, go to www.uoftjazz.ca. 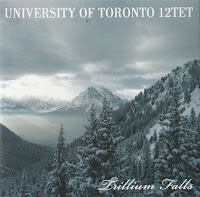 The University of Toronto 12TET is 11 musicians and one vocalist directed by Terry Promane, a prominent Canadian trombonist, tubaist, composer, and arranger who has worked with Rob McConnell Tentet, the Hilario Duran Latin Jazz Orchestra, and Kirk MacDonald's Big Band (among many others). "Trillium Falls" (UofT Jazz) is the ensemble's second CD and features a combination of standards, originals, and smart covers of contemporary works.

The album opens with Jon Cowherd's "Crooked Creek" which the pianist composed from Brian Blade's Fellowship. Drummer Mike Rajna arranged the piece, capturing the airiness of the original as well as the energetic forward motion. Jacqueline Teh's wordless vocal blends nicely into the ensemble on the theme, her voice pairing with the reeds. Rajna's rhythm section mate, bassist Alex Lakusta, provides the arrangements for Billy Strayhorn's "Isfahan" (from Duke Ellington's "Far East Suite") and Ellington's "Star Crossed Lovers" (from "Such Sweet Thunder").  The former is fairly straight-ahead with solos from trombonist Modibo Keita, trumpeter Emily Denison, and guitarist Dan Pitt while the latter is much more atmospheric with fine solos from the arranger and from alto saxophonist Anthony Argatoff (who suggests the classic Johnny Hodges sound without reproducing the master's solo.) 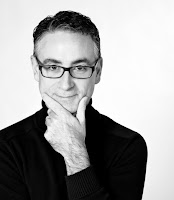 The album does cover a wide swath of musical territory. Promane (pictured left) contributes two original pieces. "The Icemaker's Mistress" suggests the music of Christine Jensen and Maria Schneider in its long melodic lines and sweeping arrangement. Pianist Jacob Thompson creates a lovely solo over the splendid brush work and bass counterpoint while trumpeter Brad Eaton flies over lush sounds from the sections.  After the solos, the piece opens up for a short interaction with the rhythm section and Ms. Teh plus a call-and-response from the sections.  The director also contributed the title track, another "open" piece, that features a flowing melody and strong solos from Harrison Argatoff and flugelhornist Emily Denison. The ensemble swings mightily on Promane's arrangement of "Witchcraft", the drummer leading the way while tenor saxophonists Kieran Murphy and Harrison Argatoff share the main melody and the solos.   UofT graduate Noam Lemish contributes "Song for Lia" (he also plays piano on the piece), a song that has a Brazilian feel in its rhythmic flow, a lovely melody that rises and falls with various voices moving in and out in the style of Maria Schneider, and smart solos from Anthony Argatoff and Pitt.

The album closes with "Hat Music", composed by Swedish saxophonist Nils Berg (for his quartet The Stoner) and arranged here by trumpeter Denison.  She captures the playfulness of the original, especially the bounce in the bass line and the rapid-fire exclamations from the drums.  The full ensemble plays at the beginning of the song, drops out for Harrison Argatoff's tenor solo and returns in the middle of pianist Thompson's excellent solo (which opens with just the accompaniment of bassist Lakusta).

What stands out when listening to "Trillium Falls" is that The University of Toronto 12TET, this small "big" band, is not only talented and full of promise but also willing to experiment and follow the vision of director Terry Promane. While jazz has moved out of clubs and mentorship has changed from learning on the bandstand to classrooms, there is often critical reaction that "institutionalizing" the music has made it stale.  You certainly do not hear that on these recordings - there is life, joy, experimentation, and community, all necessary elements to move music forward.