The Healing Power of Making Music 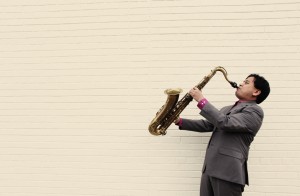 Jon Irabagon is a very busy creative musician.  He was an original member of bassist Moppa Elliott's Mostly Other People Do The Killing, has worked/recorded with guitarist Mary Halvorson and trumpeter Dave Douglas, plays in the Maria Schneider Orchestra as well as with drummer Barry Altschul and bassist Joe Fonda in the 3Dom Factor.  His ever-expanding discography now has entries with pianist Matt Mitchell and drummer Andrew Bain.  Several years ago, Irabagon started his own label, Irabbagast Records, which not only issues his recordings but also has released CDs by trumpeter Brandon Lee and the Uptown Jazz Tentet. Just in the past six months, Irabagon has toured/performed with the John Yao Quintet, the Uri Caine Gershwin Project, the Mike Pride Trio, and the Donald Vega Quintet (and a many others). 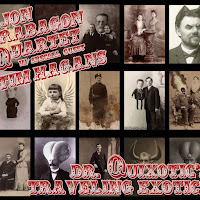 Several years ago, the saxophonist (he plays tenor, soprano, and sopranino ) formed a quartet with Luis Perdomo (piano), Yasushi Nakamura (bass), and Rudy Royston (drums).  Their 2015 Irabbagast recording, "Behind The Sky", featured Tom Harrell (trumpet, flugelhorn) with much of the material composed while Irabagon was mourning the loss of several family members. In the Fall of 2016, the group reassembled to tour South America with trumpeter Tim Hagans in tow.  They played in Buenos Aires, Argentina, and then entered Estudio Doctor F and recorded the group's second album, "Dr. Quixotic's Traveling Exotics", a six-song program of Irabagon originals that finds the ensemble often in high gear and always in high spirits.  One can certainly hear how much fun the quintet is having as five of the pieces last more than 10 minutes.  Yet, there is no fat in this music: what you get are well-drawn compositions, powerful solos, great interactions, and a splendid rhythm section. 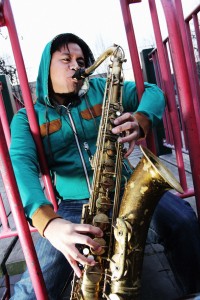 The opening track, the devilishly-titled "The Demon Barber of Fleet Street" (not from the Stephen Sondheim musical "Sweeney Todd"), opens with a circular melody played solo by Irabagon (he plats exclusively tenor sax on this album) - when the band comes in (Hagans sits this one out), the melody leads up to a muscular bass solo and then into a drum solo during which the music speeds up. We are then treated to rabble-rousing piano solo before the leader calms down the band for a moment with the original melody.  Royston lays down a powerful hard-rock beat underneath the tenor sax solo while Perdomo and Nakamura keep the foundation.  Hagans joins the band on the second track, "Emotional Physics/The Things".  The elemental melody, played by tenor sax, keeps the pace while the trumpeter flies above the band. The most amazing part takes place around 80 seconds ito the piece when the quintet breaks into a fascinating rhythm for a short while before breaking for a short bass solo.  Then into a section where the bluesy, introspective, tenor sax leads the group in a  different direction. Royston creates a storm underneath as Perdomo creates musical waterfalls. A quick tenor sax transition and the band swings back into high gear that leads to a delightful piano solo. The forward motion in the last several minutes is, at times, dizzying: even when the group "calms" down, there is such power in this music. 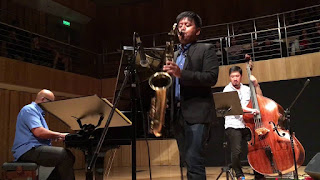 "Pretty Like North Dakota" is the ballad on the album. Moving forward atop on the strength of Perdomo's piano lines, the blend of muted trumpet and tenor sax along with the sensitive cymbal work and the bass counterpoint gets its emotional depth from the melody and its suspended rhythm (rubato).  The rhythm section drops into a slow tempo for the powerful trumpet solo. When the band stops, Perdomo reintroduces the original piano figures and Irabagon steps out for his smartly built solo.

The closing track, "Taipei Personality", opens with a very funky drumbeat, a rhythm Royston keeps up mostly all the way through (his bass drum "hits shake the speakers).  On most of the songs (on this tune as well), there are sections where Hagans and Irabagon engage in conversations or play short melodic figures while one member of the rhythm section solos.

More like Monty Python's Flying Circus than Sgt. Pepper's Lonely Hearts Club Band, "Dr. Quixotic's Traveling Exotics" has musical twists-and-turns that take the eager listener out of the ordinary into a variety of special places.  Yes, there is power in this music, the power of being an ensemble, with traveling together, with working onstage and in the studio, the power of music to bring joy to its creators as much as it does to the audience. Jon Irabagon hits new personal heights with this music, creatively and artistically.

For more information, go to jonirabagon.com. 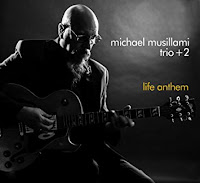 In June of 2016, guitarist, composer, and owner of Playscape Recordings Michael Musillami suffered a brain hemorrhage. As the doctors did tests, a brain tumor was discovered. The subsequent surgery was successful and the musician was sent home to begin his recovery.  He used the rehabilitation time to compose the music that  makes up "Life Anthem", the new album from the Michael Musillami Trio + 2. The Trio - Joe Fonda (bass) and George Schuller (drums) - started its life in 2002. For this recording, the band's ninth and sixth with guests, Musillami added the musical voices of Kirk Knuffke (cornet) and Jason Robinson (tenor and soprano saxophones, alto flute). 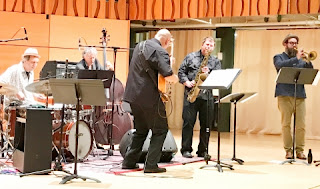 The album is a musical diary of the composer's physical trials, opening and closing with two versions of the title track.  The first is played by Knuffke: with his crystal clear tone, the music sounds like a call to prayer, a plea for attention. That leads into "I Hear Sirens In the Distance", a tension-filled quintet piece filled with long tones, moaning brass and reeds, and Musillami's slippery, short, even fragmented guitar lines that equate to the mysterious trouble he was going through waiting for the ambulance.

Along the way, there is more musical tension on "MRI Countdown" and the troubling "Slow Bleed." The composer's attitude begins to turn on "Dr. Mohammed Khaled, Neurosurgeon", a driving piece highlighted by the pounding drums, a powerful interaction between Knuffke and Fonda, and a long guitar statement - now, the leader's guitar work is more assured, not frenetic, but bending towards hope.  Fonda's solo bass spotlight, "I'm Beginning To Feel Life's Pulse Again", is a 2:00 delight that leads to the medium-tempo quintet meditation "June Recovery."  The road is not always smooth as one hears in "ICU Blues" and one imagines that "Visions" is the composer's response to having little to do but be still and recuperate. The latter tune, the longest on the 15-song album at 12:48, may have inspired by Musillami's dreams about being back on the bandstand.  His playing now has increased fire and the guitarist is enjoying the push he feels from the rampaging rhythm section. But, the pace slows for Knuffke's solo over the bass and drums followed by Robinson's blowsy tenor sax spotlight.  During the saxophonist's solo, the beat returns to an exciting level, going for an explosive climax.

The album features a trio short improvisations ( "I Hear Sirens..." is, mostly, improvised but contains composed cues), the afore-mentioned "Slow Bleed", the hesitant "Night Walker", and the handsome "Family" (which is guitar, alto flute, and, late in the piece, bowed bass).

The final two tracks are short but ever so positive.  "Think Of Something Beautiful" is an up-tempo romp one expects to break into a series of solos but, instead, leads into the group rendition on the title track. Here. the music has restored power amidst the feeling of thankfulness and joy for the leader's return to playing and being with his musical friends.

Michael Musillami's story has a happy (and healthy) ending. "Life  Anthem" takes the listener on quite a journey with compositions that are, arguably, the finest of the guitarist's (nearly) three-decade career. With his long-time rhythm section as well as two new companions, Trio +2 is a formidable ensemble worthy of your attention.

For more information, go to www.michaelmusillami.com.

Here's a live Trio version of "MRI Countdown" from April of this year: