Flutist, composer, and arranger Jamie Baum first formed her Septet in 1999: the ensemble made its recording debut for the now-defunct Omnitone label then moved to Sunnyside Records for the 2008 release of "Solace." In 2010, trumpeter Amir ElSaffar joined the ensemble, adding not only his instrument but also his great knowledge of Middle Eastern Maqam. Five years later, the group had evolved in Septet+ and issued the amazing "In This Life."  Influenced by Ms. Baum's travels to Southeast Asia and her studies of the work of Pakistani vocalist Nusrat Fateh Ali Khan, the album won numerous accolades. The arrangements blended fiery rhythms, elongated melody lines, and intelligent use of the higher sounds (flute, piano, and trumpet) with lower sounds (alto flute, French Horn and bass clarinet) to create adventurous music. 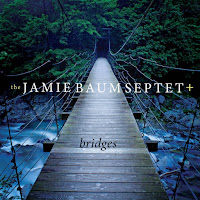 Ms. Baum's latest project, "Bridges", attracts from the moment one sees Masashi Karabuki's stunning cover photograph ("In This Life" also possess a striking cover - take a look). The nine-song program is split into three distinct sections. The first three tracks, "From The Well", "Song Without Words", and "There Are No Words") are influenced by the composer's recent personal experiences. The opening track celebrates Ms. Baum's explorations into Maqam, Jewish, and South Asian music. While one absorbs the exciting melody line, make sure to pay attention to the splendid leadership and support from the rhythm section (pianist John Escreet, guitarist Brad Shepik, bassist Zach Lober, and drummer Jeff Hirschfield plus guest percussionist Jamey Haddad). There are excellent solos from the leader, bass clarinetist Sam Sadigursky (the newest member of the ensemble), and ElSaffar, whose phrases, at times, reminds this listener of the Muslim call-to-prayer yet also move into "freer" territory.  The trumpeter, who ins increasingly showcasing his vocal talents, gets the lead on the second track, which carries the subtitle "for S. James Baum."  Here, the vocal line is influenced by Hebrew prayer (but not "The Mourner's Kaddish"), a way to give thanks for the life  of a parent or loved one.  Besides the stunning vocal, there are excellent (and emotional) solos from Sadigursky (bass clarinet) and Ms. Baum (alto flute). "There Are No Words" also refers to the mourning process but here there is a sense of renewal and purpose.  Bassist Lober takes the first solo, a handsome melodic turn. Ms. Baum follows, her flute electronically split into two registers. Escreet steps out next for a fleet-fingered dance.

The next three tracks are dedicated to "Honoring Nepal" The Shiva Suite". Ms. Baum has performed several times at Katmandu Jazz Festival and, like many people, was deeply touched by the destruction caused by the 2015 earthquake.  The "Suite" was commissioned by the Rubin Museum of Himalayan Art in NewYork City. Part 1 "The Earthquake" is a powerful musical depiction of the clam before the devastation as well as the shaking, shuddering, shifting earth before the mournful lament at the close. "Renewal" begins with gentle hand percussion and soft piano sounds (many made with Escreet's hand dampening the strings) the moves forward on the strength of a delightful and percussive melody supplied by the piano and guitar.  Bells and piano introduce "Contemplation", a piece that includes melodies and harmonies for the front line and a finishing section that is both up-tempo and uplifting.

Tabla drummer, percussionist, and vocalist Navin Chettri joins the ensemble for the next two tracks, the powerful "Joyful Lament" and  the peaceful "Mantra."  The former cut opens with voice and tabla before the band is led in by Shepik.  Hirschfield's hard-edged drumming fuels the piece which blends South Indian music with American blues in a playful yet serious fashion (the guitar solo roars out of the ensemble somewhat like what John McLaughlin did with his Mahavishnu Orchestra in the early 70s). It's just Chettri on voice and tanpura (the Indian stringed instrument that creates drones) and Ms. Baum on singing bowl and flute for the latter track. No tension here only a sense of quiet clam and reflection. 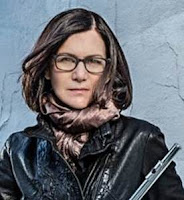 The album closes with "Ucross Me", an uptempo piece created by Ms. Baum during a residency at the Ucross Artist Colony in Wyoming.  The piece moves in and out of the rhythm stepping away for solos by ElSaffar plus a wonderful call-and-response before Shepik rocks out once more.  But, pay attention to the interactions of the rhythm section, the reeds and brass.

"Bridges", the album, does what bridges, the structure, are built to do i.e. break down barriers, cross borders, bring people and ideas together, and to take people to new places to have new experiences. Jamie Baum Septet+ continues to make exceptional music, music that makes us think, makes us contemplate, and moves us in so many ways.

For more information, go to jamiebaum.com. There you will see that the ensemble will have a CD Release Weekend at the end of May (5/25-27) with two of the shows in Connecticut.

Enjoy this track from the album: 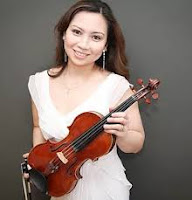 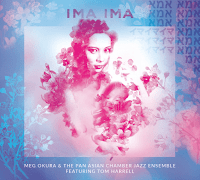 The album's title combines Ms. Okura's native upbringing ("ima" means "now" in Japanese) with her adopted religion ("Ima" is "mother" in Hebrew) while the music blends her myriad of interests, from the folk and classical music she grew up with as well as the jazz that is her passion and life. The title track has a lovely melody line that is supported by an active rhythm section. Ms. Drummond's flute blends with the soprano sax and violin introduce the main theme before Newsome steps out for a lengthy and far-reaching solo. The composer's impressions of her time in Israel are the basis of "A Summer in Jerusalem", a piece that opens as a sound montage: then the bass clarinet introduces the bass line and the ensemble powers forward. The arrangement shows the strong influence of Gil Evans behind the strong solos from Marsella (electric piano), Abbasi, and the leader. After Ms. Okura brings her an end, everyone drops out save Ms. Printup's harp. She introduces the fine flugelhorn solo while the ensemble slowly climbs back into the picture (note the lovely wordless vocal from Ms. Okura).

One can hear Japanese influences on "Tomiya" what Ms. Okura describes n the liner notes as a taiko-drum rhythm: yet it also sounds like a tango plus there is also a mainstream jazz feel.  It's so enjoyable to hear there arrangement opens to allow each voice to have a piece of the melody. Both Harrell and Ms. Okura solo yet the multi-sectioned piece allows for tempo changes and delightful interplay.  Another episodic work, "Birth of Shakayamuni", has its roots in Buddhism.  The sprightly melody is passed around from bass clarinet to flute to piano to violin before the piece moves to a solo section for Sadigursky's clarinet. More th intelligent backing from the guitar and harp. Abbasi's solo comes over a rapid-fire rhythm then gives way to a fiery solo from Ms. Drummond. The violin leads the way on the final section but, again, each voice in the ensemble has a piece of the melody. "Black Rain" takes its inspiration from the atomic bomb attacks that brought World War II to its shocking conclusion.  The poignant melody is shared by the soprano saxophone and violin. Yet, like the other pieces, the melody moves around until Marsella's captivating solo that opens with a more traditional Japanese feel before moving on.  Before Ms. Okura takes her solo, she shares a short conversation with the flutist (listen to how they move around each other with trills and musical curlicues).

"Ima Ima" makes for engaging listening. Filled with strong melodies, excellent arrangements, and fine musicianship, the album is a journey inward and outward with Meg Okura telling her young daughter the story of her ancestors, the story of the challenges her mother went through to come to the United States, and how hard it was to begin a new life.  There is no bitterness, no losing faith: instead, the music can be viewed and listened to as a celebration of survival, renewal, and hope for a brighter future.

Here is the title track: