Ah, to be in Connecticut this coming weekend. A profusion of wonderful music can be heard (not to forget the marching bands on Memorial Day Monday) in the clubs and concert spaces.

Firehouse 12, 45 Crown Street in New Haven, continues its Spring Concert Series on Friday night with flutist, composer, and arranger Jamie Baum and her Septet+.  It's the first night of three consecutive CD Release concerts - Saturday, the ensemble plays at The Cell Theater in New York City while Sunday, Ms, Baum returns to her home town to perform at The Fairfield Theatre Company, Stage One. They are celebrating the release of "Bridges", the group's new album (reviewed here). On Friday evening, there will be two sets, the first at 8:30 p.m., the second at 10 p.m. Best of all, the musicians on the recording - Jamie Baum (flutes, singing bowl), Amir ElSaffar (trumpet, vocals), Sam Sadigursky (alto sax, bass clarinet), Chris Komer (French horn), Brad Shepik (guitar), John Escreet (piano), Zack Lober (bass, singing bowl), and Jeff Hirshfield (drums) - will crowd into the Firehouse performance space and present the wonderful music on the album plus more.

If you have ever considered spending a weekend along the Connecticut shoreline, say in Old Lyme, this is the weekend to book a room at the Old Lyme Inn. Not only for the fine food and furnishings, but also for the fact that The Side Door Jazz Club is attached to the Inn and owner Ken Kitchings and his music manager, Rich Martin, have a three-night music extravaganza planned. On Friday night, pianist and composer Renee Rosnes (pictured left) celebrates her new Smoke Sessions Records release, "Beloved of the Sky" with an all-star quartet that features Steve Nelson (vibraphone), Peter Washington (bass), and Carl Allen (drums).  Ms. Rosnes, who is married to pianist Bill Charlap, has not only released 16 albums as a leader but also has worked with the late Joe Henderson, Wayne Shorter, and the SFJazz Collective.

For more information, go to reneerosnes.com.

Here's a track from the new album which features Mr. Nelson and Mr. Washington as well as saxophonist Chris Potter and drummer Lenny White: 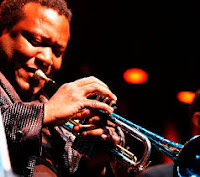 On Saturday night, trumpeter Wallace Roney brings his Quintet to Old Lyme, an ensemble that features a veteran rhythm section - bassist Curtis Lundy and drummer Ronnie Burrage - and two fine young musicians - 18-year old saxophonist Emilio Modeste and pianist Oscar Williams.  Mr. Roney, a native of Philadelphia, PA,  has been active on the jazz scene for nearly three decades. He cites three great trumpeters - Clark Terry, Dizzy Gillespie, and Miles Davis - as his mentors.  Over the last decade, Roney has become a mentor for numerous musicians, taking them on the road and into the studio to create music that ranges from mainstream jazz to more electronic adventures, always with a melodic flair and powerful solos.

For more information, go to www.wallaceroney.com.

Here's the Quintet live from Paris, France, from 2017:

Stay that extra night because, on Sunday, The Side Door presents composer and vocalist René Marie.  One of the most engaging singers and performers on the contemporary scene, Ms. Marie started performing at a young age and turned professional in her mid-teens.  She got married at the age of 18 and became a stay-at-home mother.  It was her son who convinced her to get back into singing. Getting back to music caused a rift in her marriage and she soon was divorced.  Ms. Marie moved to Washington D.C., made her name on the club scene, signed to the MaxJazz label (now Mack Avenue) and released her debut album at the age of 45!  Slowly and steadily, she has developed her musical persona and stage presence that is so appealing.

Joining her will be her touring and recording Trio including long-time members Elias Bailey (bass) and Quentin Baxter (drums) plus newest member (3 years and counting) pianist John Chin. For more information, go to renemarie.com.


The Side Door opens its door at 7:30 p.m. and the first set commences one hour later. For more information and reservations, go to thesidedoorjazz.com or call 860-434-2600.

Hopefully, you'll be able get to one or more of these shows.
Posted by Richard B. Kamins at 9:05 PM