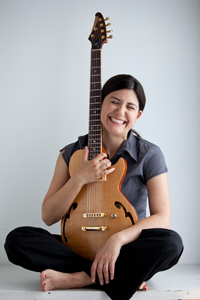 Guitarist, composer and educator Amanda Monaco is the featured artist in the latest installment of Noah Baerman's "Jazz Up Close." Baerman, a pianist, composer, and educator, brings artists to the Hubbard Room of The Russell Library, 123 Broad Street in Middletown where they perform original material and answer questions from the audience.  Ms. Monaco, who has been a friend of Mr. Baerman since high school, is the first performer for the "Sound Belief" series music inspired by the artist's religious beliefs and faith. I had the honor of presenting Ms. Monaco's "Pirkei Avot" at Congregation Adath Israel several years ago. The name of the project translates to "Ethics (or Chapters) of the Fathers": the writings, which come from the Mishnah (which can be found in the Talmud), deal with interpersonal relationships and how one is expected to conduct his/her life.

On Thursday May 31, the guitarist and Baerman will be playing  newer songs based on the "Pirkei Avot" alongside vocalist Tammy Sheffer, recorder master Daphna Mor, bassist Henry Lugo, and percussionist Rogerio Boccato.  The program, free and open to the public, starts at 7 p.m.  For more information, go to bit.ly/2IO0hFz.

Another busy three-day weekend at The Side Door Jazz Club in Old Lyme kicks off on Friday June with drummer Willie Jones III and his Quintet.  Jones III is a native of Los Angeles: he first came to critical attention in Black Note, a group he co-founded in the early 1990s with bassist Marcus Shelby.  He went on to work with trumpeters Roy Hargrove and Arturo Sandoval, vibraphonist Milt Jackson, vocalist Kurt Elling, and saxophonist Sonny Rollins (among many others).  In 2000, he released his debut album as a leader. Titled "Volume 1...Straight Swingin'", the album came on the drummer's WJ3 label.  In 2017, Jones III released "My Point Is..." his seventh album as a leader.

To learn more about the drummer, go to www.williejones3.com.

On Saturday, CT native Noah Preminger returns to The Side Door  with his Quartet. The ensemble - Preminger (tenor saxophone), Jason Palmer (trumpet), Kim Cass (bass), and Dan Weiss (drums) - is  celebrating the release of the saxophonist's first release on the Criss Cross label. "Genuinity" is also the first album that contains all originals composed for a band that has only been together for four years and already has four albums (this is Weiss's first time with the group, replacing drummer Ian Froman).

This has been a busy year on the album release side for Preminger.  Besides the Criss Cross date, he's also released a duo album with pianist Frank Carlberg on the pianist's Red Piano label and teamed up with bassist Cass, drummer Rob Garcia, and guitarist Nate Radley for an album of music composed by Frederik Chopin (Dead Composers Club is the name of the group he co-leads with Garcia). I reviewed all three albums (read here).

The music on "Genuinity" is among the finest that Noah Preminger has produced since he first came onto the contemporary music scene in 2008. What's amazing about the album is that the band had not played the music together before the recording. That says a lot about the intelligence and creativity of the musicians involved. The Quartet has played  a number of gigs since the album was issued so the music should be even stronger.

Here's the handsome piece that closes the album: 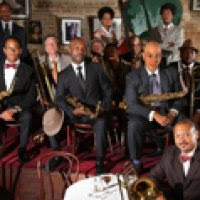 Sunday night at The Side Door should be fascinating as trombonist Delfeayo Marsalis (brother of Wynton, Branford, and Jason) brings his Uptown Jazz Orchestra to the small stage at the venue.  Mr. Marsalis created the ensemble in 2008 and recruited baritone saxophonist Roger Lewis (Dirty Dozen Brass Band) to help with the recruitment and material.  In that time, the UJO has issued three albums, the latest being 2016's "Make America Great Again" (which was issued two months before Election Day).

Not sure how big a band will perform but you should expect to hear a large amount of New Orleans music (the Marsalis's birthplace) as well a good portion of swing.  Crescent City musicians understand how to move an audience so I would not be surprised if Side Door owner Ken Kitchings leads the Second Line through the performance space and into the Old Lyme Inn on the other side of the building.  No matter what, this should be quite a Sunday treat.

For more information about Mr. Marsalis & The Uptown Jazz Orchestra, go to www.dmarsalis.com.
As for The Side Door, that door opens at 7:30 p.m. and the music commences at 8:30.  For tickets and more information, go to thesidedoorjazz.com or call 860-434-2600.