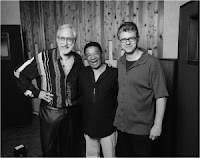 I have had the opportunity to interview Dr. Denny Zeitlin several times over the past decade. He's had a long career - his first recording was issued in 1963 - not just in acoustic music but also as an experimenter in electronic pieces. The pianist, composer, clinical professor of psychiatry, turned 80 in April of this year and just this past week (5/02-5/05), he, bassist Buster Williams, and drummer Matt Wilson performed at Mezzrow in New York City.  That trio has been together since the early 2000s, recording three albums and doing the occasional tour.  Like the best trios, it's a group of equals: yes, the rhythm section takes its cues from the leader/pianist but their familiarity allows to give as good as they get.  Because of that trust, musicality, and willingness to go were inspiration takes them, the music they create is such a joy to listen to. 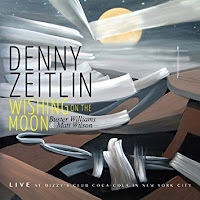 The trio's latest sonic adventure, "Wishing On The Moon: Live at Dizzy's Club Coca Cola in New York City" (Sunnyside Records), was recorded in March of 2009 yet sounds fresh and is quite delicious.  The 11-song program is a mix of standards and originals plus a fascinating take on "Put Your Little Foot Right Out", a child's nursery rhyme/traditional folk dance tune that inspired "The Hokey Pokey."  This performance is neither hokey or pokey but a wonderful adventure in melody and improvisation.  Even when the music is up-tempo, the trio makes sure to introduce melody, listening to each other, and pushing (sometimes gently, other times with forcefully) each other to move the music forward.  On pieces such as the title track (a Zeitlin original), listening to Williams's fine counterpoint and Wilson's sparkling brush work under the articulate piano solo is a real treat.

The centerpiece of the recording is the four-part "Slickrock" (the title of this trio's first album on the MaxJazz label) - inspired by composer Zeitlin's mountain-biking trips to Moab, Utah, the music opens with "Dawn; Gathering", a rubato piece features noisy percussion, bowed bass, and "serious" piano chords before the pianist introduces a shimmering melody (even strumming the piano strings) before exploding into "On The Trial" (not the Ferde Grofe piece), an exciting romp powered by the flying bass lines and snappy drumming.  "Recovery" sounds as if the bicyclist has slid off the path, with fiery drumming, throbbing bass, and skittish piano lines. Wilson's martial snare drum gives Zeitlin the opportunity to create a wide-ranging piano solo. The music calms down before before the final section, "On The Trail Again", when the trio moves back into high gear, powered by a thunderous drum solo that leads to a rousing climax.

If you are a fan of these musicians, you will devour this music.  Classy, melodic, rhythmical, often stunning, and great fun, "Wishing On The Moon" will make you wish you were in the audience as well as go back ands listen to the other albums by Denny Zeitlin, Buster Williams, and Matt Wilson - I know I did!

(I'll post a track as soon as one is available). 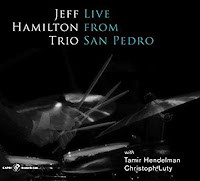 Speaking of great fun, you should take a listen to "Live From San Pedro", the newest CD from the Jeff Hamilton Trio and their first live recording for Capri Records.  The Trio - Hamilton (drums), Christoph Luty (bass), and Tamir Hendleman (piano) - has been together since the turn of the 21st Century, recording a slew of albums by themselves and backing artists such as saxophonists Cory Weeds and Scott Hamilton plus vocalist Wilford Brimley (!) For this album, recorded in January of 2017, the program includes two pieces by one of the drummer's long-time musical partners, bassist John Clayton, one original each from the drummer and the pianist, two from Broadway musicals, Thelonious Monk's "In Walked Bud", a splendid version of "Poinciana", and a  piece each from Hamilton's friends, the late pianist George Robert (1960-2016) and drummer Joe LaBarbera 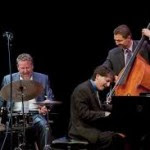 Again, familiarity breeds excellent results. Hamilton's "Sybille's Day" opens the album on quite the swinging note. It's a bluesy shuffle powered by the thick bass lines and dancing drums. That cushion allows the pianist to really dig in and produce quite the exciting solo.  There are no surprises in the Trio's take of Ahmad Jamal's classic "Poinciana" - yet the loping beat, the circular bass line, and the recognizable piano melody is pleasantly comforting. Luty's elastic bass lines and Hamilton's drums do conjure up Jamal's classy rhythm section of Israel Crosby (b) and Vernel Fournier (d).  It's so easy to get lost in the rhythm section that you miss the splendid playing of Hendelman.  The temptation to press "repeat" is hard to resist.

Several pieces emphasize Hamilton's fine work with brushes.  Robert's "Hammer Tones" and Clayton's "Brush This", with the former being a jaunty showcase for how the ensemble can play a joyful blues and the latter a a sweet re-arrangement of a classy tune from the Clayton-Hamilton Jazz Orchestra repertoire.  The other Clayton contribution is also an uptempo blues shuffle.  Hendelman really digs in for a funky solo while his partners really provide the propulsion (dig the great cymbal work).
Hamilton's dancing brushes lead the trio into a samba-soaked performance of "Gary, Indiana" (from "The Music Man") while the brushes create a softer environment on the lovely "I Have Dreamed" (from "The King and I"), the one ballad on the program.  Pay close attention on the slow song to the melodic counterpoint Luty creates as well as the soulful musings of the pianist.

"Live From San Pedro" is a flat-out treat from beginning to end.  Three talented musicians who absolutely do not rest on their laurels create a program that is filled with swinging rhythms, splendid solos, and a joie de vivre that is impossible to resist. The Jeff Hamilton Trio shines brightly: like the Denny Zeitlin album above, one imagines it would have been great to have a front-row seat for this playful and play-filled set.

For more information, go to hamiltonjazz.com/artist-category/jeff-hamilton-trio/.

Acoustic guitarist and composer Adam Tully first studied tango music in 1995 Buenos Aires, Argentina, with tango guitarist master Anibal Arias.  Since then, he performed as a soloist on stages throughout the United States.  He has also worked alongside \numerous artists and groups in the U. S. and Latin America, playing with The Zvi Midgal (a group that takes its name from famous Polish prostitution ring that also sent women to Argentina) and Importango (a piano, guitar, and violin trio that was based in Brooklyn). Tully can play Baroque guitar, Latin American music,  and flamenco but has found a home playing and composing tangos. 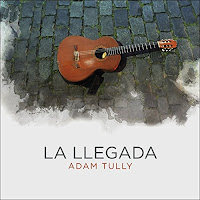 His debut album as a leader, "La Llegda" ("The Arrival") has just been issued by the Argentinean label Epsa Music: The 11-song program features Tully's guitar alongside the articulate bass work of Pedro Giraudo and the emotionally rich piano of Emilio Teubal. There are several moments when this music is reminiscent of the work of Astor Piazzolla as well as Ralph Towner.  Tully's "Vals Mio" opens the album. The lovely melody is complemented by the subtle bass work (note Giraudo's counterpoint) and stately piano lines. The delicate piano and guitar interactions on Teubal's "Cumbio de Rumbo" are dramatic to be sure but also quite melodic. The grandeur of "Don Andrés" also has a playful side. Again, the brilliant bass counterpoint stands out alongside both the guitar and piano. When the guitarist leads the bass ands piano into the delightful "Andanzas", it's hard not to get up and dance. Yet, the piece can be as delicate as a spring breeze and powerful as a clap of thunder.

Tully goes it alone on "Doce", a lovely tune from contemporary Argentinean composer Fernando Otero.  The blend of various melody and chords move like lines of poetry and Tully's use of silence gives such gravitas to the music. For the final track, "Lluvosia", Felipe Traine adds the voice of his guitarrón (an deep-bodied six-string acoustic bass) to Tully's guitar.  They create quite a mysterious sound; it is fascinating to hear how they wrap their guitar lines around each other and how the lower guitar creates such a fine counterpoint to the higher sound.

"La Llegada" is quite an attractive album with music that reaches into your mind and soul.  At times joyous, other times melancholy, Adam Tully has created music that reflects and respects the past while illustrating how a trio can also be forward-looking.  The interplay of Tully with Emilio Teubal and Pedro Giraudo (his bowed bass throughout is quite attractive) is so impressive.  Sit down with this album and enjoy the journey.

For more information, go to www.adamtully.com.