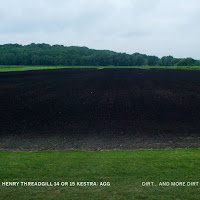 Not one but two new recordings and ensembles playing the music  of Henry Threadgill have been released this month on Pi Recordings.  Aficionados of the Chicago native, Pulitzer Prize winning, composer, saxophonist, and flutist, received an early New Year's gift when "Dirt...And More Dirt" was issued online 12/31/17. It's the first recording by 14 or 15 Kestra: Agg, a 15-member ensemble that features three alto saxophonists (including the composer), two drummers, two pianists, two trumpeters, two trombonists, tuba, bass, cello, and guitar. The program consists of two suites, the six-part "Dirt" and the four-part "And More Dirt", both inspired by artworks (Walter de Maria's "Earth Room" and the sculptures of Stephen De Staebler).

The music builds off of the work of Threadgill's Zooid ensemble (cellist Christopher Hoffman, guitarist Liberty Ellman, drummer Elliot Humberto Kavee, and the stunning tuba player Jose Davila) not only with the more expansive sonic palette but with even greater dynamic variations.  If you are familiar with Threadgill's music, the pieces often have choppy rhythm parts, usually move from melody to another melody, matching disparate sounds, going in unexpected directions, and rarely concerned with solos.  In those ways, the music on these albums may remind some of the work of Lawrence "Butch" Morris (1947-2013) as well as the large ensemble writing of Muhal Richard Abrams (1930-2017).

You need to hear this music without the prejudices of a reviewer or critic. Sit down and listen, then listen again. Play it loud. Pay attention. Look at the cover image taken by long-time colleague Jules Allen. How does the music relate to the image?  Listen again and take notice of the conversations between musicians. Be open.  The music Henry Threadgill composes, arranges, and plays is unlike any other. Like Morris and Abrams, like Wadada Leo Smith, George Lewis, Nicole Mitchell, Roscoe Mitchell, all members or former members of the AACM, Threadgill's music is unique. 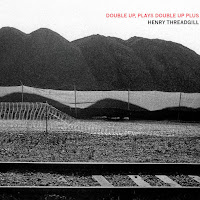 "Double Up, Plays Double Up Plus" is the second recording by Threadgill's Ensemble Double Up, that made its debut on the 2016 Pi Recording "Old Locks and Irregular Verbs." The "Plus" on the new album refers to the fact that the group is now an octet adding a third pianist to the lineup of saxophonists Curtis MacDonald and Roman Filiú, Jose Davila (tuba), Christopher Hoffman (cello), and Craig Weinrib (drums). Vijay Iyer and David Virelles were the pianists on the first album - Virelles returns but now is joined by Luis Perdomo and David Bryant.  In the past, Threadgill rarely included piano in his music but it is fascinating to hear his he uses the instrument in the ensembles reviewed here.  Listen to "Clear and Distinct From the Other A", notice how all the voices are utilized either in duos or trios, how the piano moves in and out, in one instance making room for Virelles's harmonium and also playing a short passage with just piano and harmonium.  When the rhythm section, notice the interaction between drums, cello, and tuba - that trio's forward motion is often dizzying and pushes the various soloists to dig deeper.

The program also features "Clear and Distinct From the Other B" which may be the same composition but approached in a different manner. Both performances open with solo piano and then different combinations of musicians create fascinating interactions. There is more focus on the piano on "B" with several moments of powerful solo playing.

This two cuts are followed by "Clear and Distinct" - again, the piece opens with a solo voice and here it is Davila's stunning tuba playing (includes several moments of multiphonics). One by one, other instruments enter and the focus shifts to a long piano statement. In fact, all three pianists solo and support each other on this track. Again, the rhythm section shines. The interaction of tuba and cello (especially Hoffman plucks the strings) is a treat to listen to.

What stands out for this listener is how playful this music is. Not that the music isn't "serious" but Threadgill has composed melodies and created arrangements that open up to allow the ensemble the freedom to move. Solos abound as do "groups-within-the-group" interactions (listen to "Game is Up" below) and, because these musicians have a great understanding of what the composer needs of and from them, the results are so pleasing.

"Double Up, Plays Double Up Plus" has elements of the music that Henry Threadgill has created for nearly five decades. And, the addition of piano has opened up the aural landscape even more for a composer who continues to create compelling music on so many levels.

For more information, go to www.henrythreadgill.com.