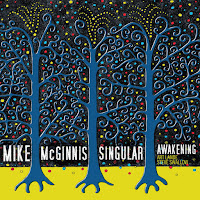 Clarinetist-soprano saxophonist Mike McGinnis walked into Systems Two Studio in Brooklyn, NY, on March 28, 2016, in the company of pianist Art Lande and bassist Steve Swallow.  When they exited the building later that very same day, they had recorded a bushel of songs.  Eight were released in April of 2017 on "Recurring Dreams" (Sunnyside Records). 13 months later, McGinnis and his musical partners have issued 12 more tracks under the title of "Singular Awakening."  The majority of these tracks come from the first hour of the session when the three musicians just started playing - in fact, eight of the pieces are improvisations.  What stands out here, as it did on the trio's initial offering (my review here), is how much fun they have playing music.

The program opens and closes with a song each from Swallow and Lande.  "Here Comes Everybody" is a joyous romp that bounces atop Swallow's melodic and thick electric bass. Lande's Monk-like accompaniment is a treat over the fiery clarinet solo.  The bassist's rollicking "Bite Your Grandmother" has the feel of a Charlie Parker tune with jumping solos from Lande and McGinnis (on soprano).  The pianist's contributions, "Shining Lights" and "For Elise", have strong melody lines: in fact, all three musicians share the statement of the melody on the former track while the latter is a lovely ballad (reminiscent of Randy Newman). This song reminds the listener how much influence reed master Jimmy Giuffre has on the trio.  The classical quality of the musicians' interactions and the clarity of their notes stands out.

In between, the improvisations range from the free-wheeling "Shockinawe" (and its furious interplay) to the lovely ballad "A First Memory" to the siren-like clarinet that introduces "O'Flaherty Decides to Play Jazz", a tune that also has McGinnis playing "rhythm" clarinet while Swallow walks and Lande dances across the keys.  "Slow Dance In a Whisper" is also quite a beautiful ballad with Swallow creating the melody over sparse piano chords (McGinnis sits out this track) - the bassist's instrument sounds so acoustic.  The dream-like piece is airy, with sustained piano notes and intelligent use of space and silence.

If you did not hear this trio's first album, that's okay: but I'd suggest buy them both.  This is music that speaks to the creative listener, those people who enjoy when musicians take chances and leaps-of-faith the way Mike McGinnis, Art Lande, and Steve Swallow usually do and definitely do here.  "Singular Awakening" shines brightly!

Here's a taste of one of the improvised tracks: 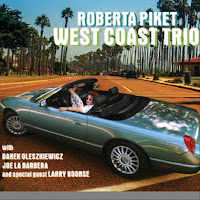 Pianist and composer Roberta Piket is a musician who can play in any type of ensemble as well as solo. Still, it's fun to hear her in a trio.  "West Coast Trio" (13th Note Records) gives the listener a big clue in its title.  The pianist ventured west from her NYC digs to Los Angeles for a West Coast tour. She lined up drummer Joe La Barbera who recommended bassist Darek Oleszkiewicz: they went into the studio, then hit the road.  Ms. Piket came back to the East Coast with a good memories of her tour and a delightful recording. 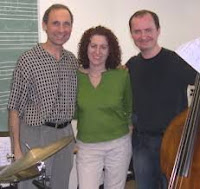 The nine tracks include two Piket originals, the attractively flowing tribute to her teacher Richie Bierach titled "Mentor" and the handsome ballad "A Bridge to Nowhere" (one of the two tracks to feature guitarist Larry Koonse). Note La Barbera's splendid cymbal work on the latter track as well as the wonderful chordal work from the leader beneath the guitar solo.  The other seven tracks feature a number of recognizable standards ( i.e. "Windmills of Your Mind" and "My Buddy") and some surprises (Chick Corea's  hard-driving "Humpty Dumpty" and John Hicks's sweetly melodic "Yemenja") plus a swinging reading of George Shearing's "Conception" (the other track to feature guitarist Koonse) as well as a lovely reading of "Flor de Lis" by Brazilian composer ands vocalist Djavan (Billy Mintz joins the trio on percussion to add percussive spice to the mix).

For some reason, the track that really impresses me is the swinging reading of Richard Rodgers's "Falling In Love With Love" - the trio plays so inspired, they interacting as if they were breathing as one, and their joy jumps out of the speakers.  Oleszkiewicz's solo is splendid, quite melodic (as he is throughout the album) while the standard 8 bars trio - 8 bars drum solo is anything but standard. It's the give-and-take that audiences enjoy so much and that this trio generously supplies.  "Windmills.." also gets an uptempo reading: again, the three musicians sound so in sync that you want to immediately replay the song to hear what each individual is playing.

The best "piano trios" are the ones in which the listener gets lost in the group's sound before he starts to listen to the solos.  "West Coast Trio" is one of those recordings.  You expect that, based on previous recordings and live gigs one may have seen and/or heard, these musicians will play well.  Roberta Piket chose her companions and the material wisely and we are the beneficiaries.

Here's Roberta talking about the trio, the music, and the conception: 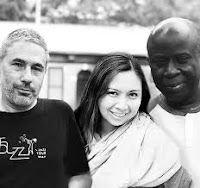 NPO Trio is Meg Okura (violin), Sam Newsome (soprano saxophone) and Jean-Michel Pilc (piano and its debut is an often dazzling, free-wheeling, improvisational collection titled "Live at The Stone" (Chant Records). Ms Okura, born in Japan, is married to Mr. Newsome and both have known and played with the pianist for the past two decades.  After her move to the United States, the violinist converted to Judaism. Besides leading various ensembles (including her Pan-Asian Chamber Jazz Ensemble and the J-Orchestra), she has worked with a wide variety of musicians, from the late Michael Brecker to the Jewish/Middle Eastern band Pharaoh's Daughter. 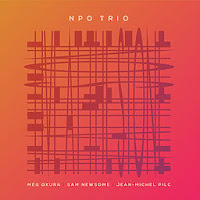 The album features three fascinating musical adventures including the untitled six-part, 49-minute suite that opens the program.  Based on the Yiddish tune "Oyfn Pripetchik" (a song about a parent teaching her children the alphabet), the music is often spell-binding aa the piano rolls beneath the high notes of the violin and the soprano sax alternately wails and sighs.  The opening section, "A Four Forty", is the prelude: about five minutes in, the original melody makes its first of numerous appearances.  The plaintive tune rises out of the din of the aptly-titled "Bells, Whistles, and Sirens", after the riveting piano, the hard-edged soprano, and the high-notes of the violin have taken the listener on a journey through a chaotic world.  Along the way, the musicians portray a world where so many people are dealing with relocation with the hope of a new life ("Travels" and "Exodus and Emancipation") - the journey the trio "plays" is not an easy one but fragments of the original melody help to soothe the troubled heart. By the time you reach the last section, "Pleading" (which is mostly a duet for soprano sax and piano), you begin to understand that this is not the climax of the journey but that your plea is a prayer fore the strength to go on. Newsome's tremendous range of notes and emotions are amazing to follow, to be absorbed in, to be able to tell such a powerful story that one hangs on every note. 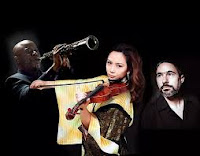 The track following the suite, "Unkind Gestures", is the shortest improvisation (6:54) but its power comes from its anger and the musicians attempt to reconcile that emotion the power of creativity to transform the players and the listeners. If you listen closely, on occasion you hear snippets from John Coltrane's "Giant Steps", the melody line often fragmented but recognizable. "Yiddish Mama No Tsuki", the final track, combines Ms. Okura native and adopted heritages taking two songs dedicated to mothers which the trio play and then create variations.  It opens with solo violin followed by solo piano; then, Ms. Okura and Pilc play a tango which Newsome's "clicking" soprano joins after a moment.  It is fascinating to hear the soprano saxophonist go from the keys clicking to a soaring melody to an abrasive set of sounds and back to melody. The trio changes directions and moods several times during the last half of the piece, closing on a rippling piano line, more clicking saxophone, and chords plus the violinist hitting the strings with her bow .

One hopes that is just the beginning for NPO, that Meg Okura, Sam Newsome, and Jean-Michel Pilc continue to play together, to make challenging and such rewarding music.  "Live at The Stone" is an aural magic show that reaches for your heart and your mind.

Take the time to listen to "Pleading":