So much has happened on a public and personal level that there were stretches over the past 12 months when music took a back seat to life. Anyone who knows me realizes how hard it is for me to write those words because, for the vast majority of my 66+ years on this planet, music has always been front-and-center.  Can't walk through our house without a CD on a table or desk, can't ride in my car without a pile of CDs to play (love those 6-disk changers!), and there is always a song running through my head.

But, 2015 was different. My teaching load was heavier but not so bad (plus I met some very smart and curious young people) and I actually stepped down from a part-time job.  There were numerous health issues in the family, good friends moved and, invariably (as it happens when one ages), friends passed away.

After a particularly tough few weeks (in October), several new recordings wormed their way into my ears and the excitement returned.  You'll see them listed below in this first set of "Best of 2015."Also, on the night of the Paris terrorist attacks, I saw and heard the Dave Douglas Brazen Heart quintet at The Side Door Jazz Club in Old Lyme; the power of the music, whether it was the gospel songs that were woven n and out of the 2 sets or the splendid interactions of the 5 musicians, gave me back a piece of my heart that is continuously torn away at by the horrendous stupidity and callous yet calculated disregard for human life and basic rights at home and around the world. Every semester, I ask my students "Can music change the world?", a question that begs to answered in the affirmative. I think many of them humor me by saying "Of course it does" but, in the long run, I fall back on telling them that music certainly changes the way I see the world, thereby avoiding the possibility of having them say "not really."

Well, these recordings brought me joy, often challenged my world views, made me sit down and take notice, and even gave a sense of peace (if only for a few hours at a time).

There is no one overall favorite but this group are the ones I returned to time and again.

Truth be told, I heard Henry Threadgill Zooid live at Wesleyan  University several years ago playing a few pieces off of "In For a Penny, In for a Pound" (Pi Recordings) and was not blown away. Then the 2-CD set arrived this year and blew me away each time I listened.  One really needs to sit and listen, to listen to the interactions, to the various melodies and counter-melodies that move through these 6 tracks to really take in the majesty of this project.  This is just one of several recordings in this list that point to the ongoing work of the AACM, the Chicago-based organization that has been celebrating its 50th anniversary in 2015.
Go to pirecordings.com/album/pi58.

Near the close of 2014, we got to hear David Bowie's collaboration with the Maria Schenider Orchestra, a dark-hued, sinister, piece titled "Sue (or In a Season of Crime").  Then in May of this year came "The Thompson Fields" (ArtistShare), a splendid collection of new pieces that feature her amazing ensemble and fine soloists (ArtistShare supporter also received 2 other tracks, making the entire album run nearly 90 minutes.)  Cinematic in scope and poetic at heart, one is continually impressed by how much emotion and narrative the composer/arranger puts into her music.

In its 20th year, PosiTone Records released a slew of recordings, most, if not all, worth your time and money.  The one that stood out most to me was "The Whisperer" from bassist/composer Ben Wolfe. With pianist Orrin Evans, drummer Donald Edwards and the very impressive Stacy Dillard (his soprano sax work stands out throughout the program), the program goes from strength to strength with nary a wasted moment.  The quartet (or variations of the 4 participants) appeared twice in Connecticut around the time of the release and, not hard to believe, the music sounded even more impressive.

For more information, go to posi-tone.com/whisperer/whisperer.html. 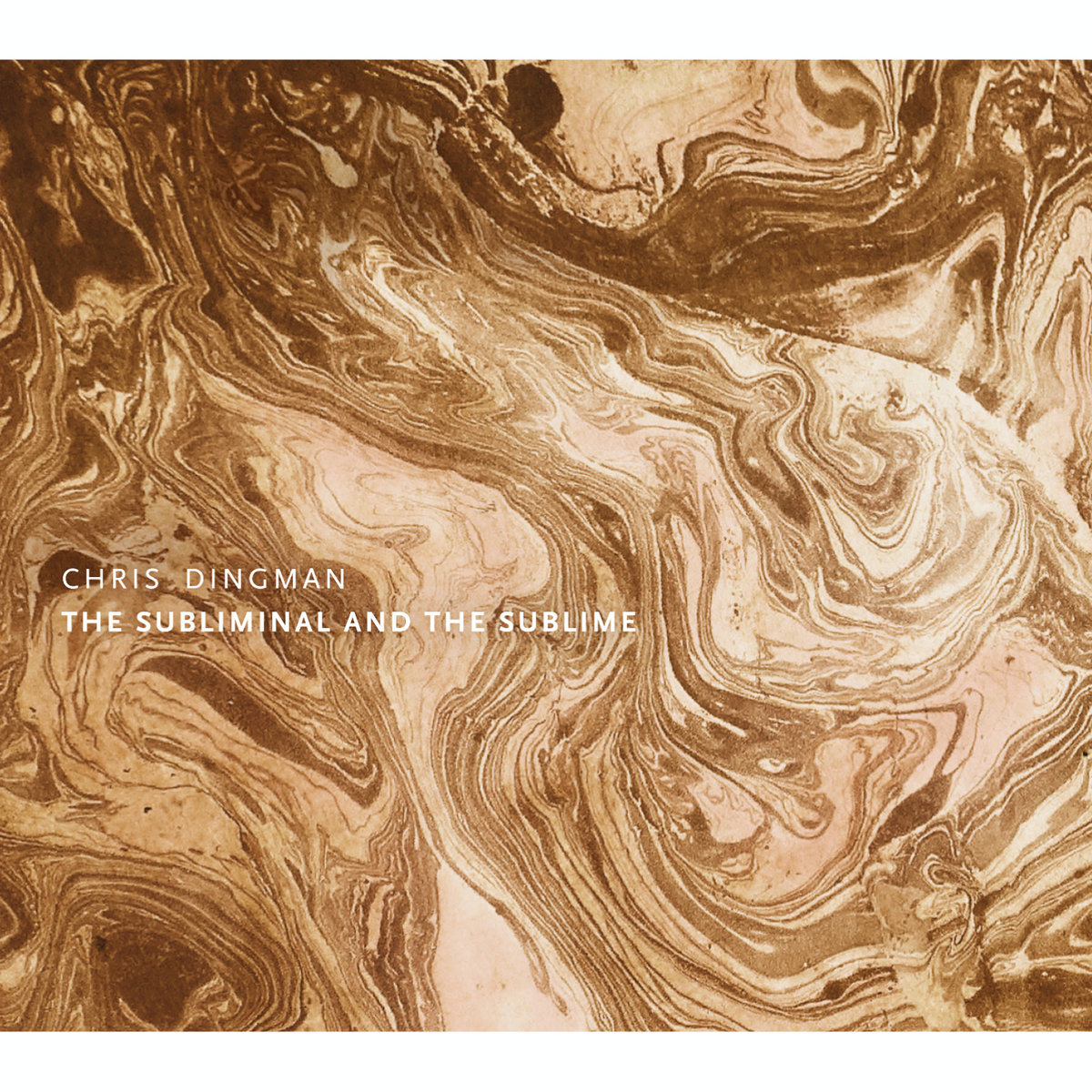 Vibraphonist Chris Dingman appeared on a number of mighty impressive CDs this year (see directly below and in further installments) but his own release "The Subliminal and the Sublime"(Inner Arts Initiative) is a splendid work of art. The original music features the contributions of an amazing group of young musicians including Fabian Almazan (piano), Loren Stillman (alto saxophone), Ryan Ferreira (guitar), Linda Oh (bass) and Justin Brown (drums). In my review, I called this "music for healing" and this music resonates even more as I return.

For more information, go to www.chrisdingman.com/the-subliminal-and-the-sublime/.

This is a fairly new release but, like the Mike Holober release below, has been very hard for me to ignore.  "Follow The Stick" (BJU Records) is the first recording from reed artist Sam Sadigursky to exclusively feature his clarinet work and not to have poetry. Nevertheless, the music shines on the strength of the material (mostly original) and the great work of Bobby Avey (piano), Jordan Perlson (drums), the afore-mentioned Chris Dingman and the leader. I love the interactions, the variety of material and sounds and would love to see the band in person. 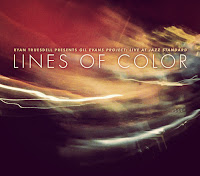 Ryan Truesdell has dedicated a good part of his life to keeping the legacy of Gil Evans' music alive and most certainly well. He has done this through his research and access to arrangements that had never seen the light of day.  In the process of 2 recordings (with personnel that often overlaps with Ms. Schneider's Orchestra), Truesdell has reminded modern audiences of the incredible scope of this music, how modern it sounded 5 -6 decades and his modern it still sounds. "Lines of Color: The Gil Evans Project" (ArtistShare) may not be as immediately dazzling as its predecessor (2013's "Centennial") but the CD is chock-full of impressive pieces that gives an even fuller picture of a most amazing composer/arranger.
For more information, go to www.ryantruesdell.com/gilevansproject/. 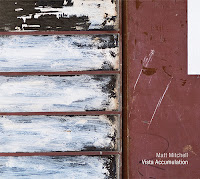 During my time of musical abstinence, the recording that broke the spell (so to speak) was the sprawling 2-CD release from pianist and composer Matt Mitchell. "Vista Accumulation" (Pi Recordings) features all-original compositions played by Mitchell (who also appears on several albums below), bassist Chris Tordini, drummer Dan Weiss and saxophonist/clarinetist Chris Speed.  Even today as it plays in the background, I am pulled into the group's performances by the audacity of the melodies and performances.

For more information, go to pirecordings.com/album/pi62.

This was the other CD to snap the spell. Pianist, composer, and arranger Mike Holober may be best known for his big band work but "Balancing Act" (Palmetto) stands out of his discography for any number of good reasons. First is the 8-member ensemble including Brian Blade(drums) and John Hébert(bass) plus a front line of Jason Rigby (tenor saxophone, clarinet, bass clarinet). Dick Oatts (alto & soprano saxes, flute), Marvin Stamm (trumpet, flugelhorn), Mark Patterson (trombone), and Kate McGarry (voice). Second is the great choice of material, mostly originals but with 2 prominent covers.  I love the intimacy of this music, the splendid musicianship, the intelligent writing, and just how great Kate McGarry sounds in the midst of the arrangements.

For more information, go to mikeholober.com/discography/. 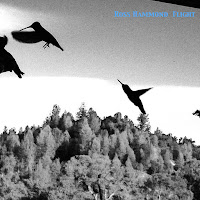 "Flight" by Ross Hammond (Prescott Records) is a collection of solo guitar pieces created by an artist best known for electric guitar playing. Recorded in various locations around California (including on his front porch), this is music that pulls in the listener from the first note and does not let go until the 15th song has ended (and beyond).  In my review, I mentioned John Fahey and Leo Kottke but should have included Jorma Kaukonen as well. That written, Hammond doesn't imitate any of those players but creates his own world.  This is great music for sitting by yourself and contemplating the world.

For more information, go to rosshammond.bandcamp.com/album/flight. While you're on his Bandcamp page, check out "Reindeer Songs", his album of Christmas songs - it certainly makes the season lighter and brighter!

In my initial review, I called "Flirting With Disaster" (Jazzed Media) "adult music", serious and playful, contemplative, so well-played and sung.  That's what we expect from Lorraine Feather.  From her sanctuary in the islands of Washington state, she connects with the hearts and minds of listeners around the world.  Her collaborations with composers Dave Grusin, Russ Ferrante, Shelly Berg, and Eddie Arkin keep getting deeper and, if possible, more personal and even more musical.  I find it impossible not to listen to all 11 songs when I play this CD (no shuffle for me.  Violinist Charles Bisharat, who appears on a number of tracks, is an absolute standout!

For more information, go to www.lorrainefeather.com/albums/flirting-with-disaster/.

Needless to say, there's more and it'll show up in the next few weeks.  Thanks for reading!
Posted by Richard B. Kamins at 12:50 PM