Track one starts quietly, just the bass, and one must pay attention. The reward is in how the melody sounds likes a prayer, the pizzicato notes sustained. Soon the trumpet enters and another melody, one that complements and comments on the bass lines, takes shape. The bright clarity of the trumpet rises above then bends to join the frenetic bowing.

"Celestial Weather" (TUM Records), recorded in 2012, features the unique voices of Wadada Leo Smith and John Lindberg.  Friends and musical partners (on-and-off) since 1977, the duo play 3 extended pieces, a pair of 2-part works (one composed by each musician) and the 5-part title "Suite" credited to the duo. 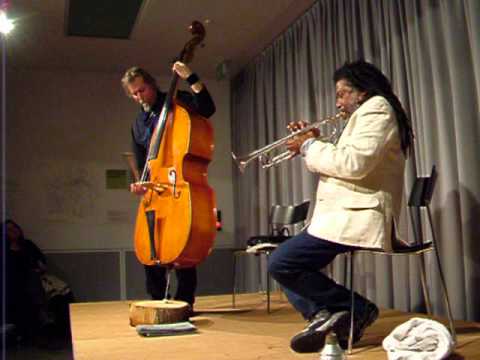 Opening with Smith's "Malachi Favors Maghostut - A Monarch of Creative Music", the music celebrates the contribution of the late bassist (1927-2004) who most know from his decades with the Art Ensemble of Chicago.  He was such an elemental part of the early music from the AACM, his thick tones and his assured playing was more than an anchor but a guidepost for his fellow musicians. Here, Lindberg does not imitate his elder; this is both an elegy and an appreciation, a prayer and a sonic painting, reaching an exciting climax in a flurry of bowed tones.

The "Suite" lasts nearly 35 minutes, each section dedicated to bad weather. The artists use their poetic license to suggest a hurricane, to create a eulogy for a typhoon (great muted trumpet and expressive - often moaning bass lines), to intimate the danger of a cyclone, to wander through but not fear an icy fog, and, in a most impressive manner, paint the dangers and express the fearful wonder of chasing a tornado.  It's true, the titles gives a guidepost to the listener and it's fun to match the sounds to the description but this is also music that involves one on so many ways.

Both Wadada Leo Smith (his 74th birthday was a week before Christmas) and John Lindberg (56) have been creating impressive sounds together and separately since the 1960s and late '70s respectively. Their paths have crossed many times since their initial meeting as members of Anthony Braxton's Creative Orchestra (3 decades later, Lindberg replaced Favors in The Golden Quartet). On "Celestial Weather", their creative conversation continues in ways that defy labels, ignore cliches, and enrich our lives - like the poetry of William Carlos Williams, Phillip Levine and Claudia Rankine, the emotion and power  in this duo music moves beyond borders, over fences and the barriers we erect and allow us to see further and hear deeply.

For more information, go to tumrecords.com/046-celestial-weather.