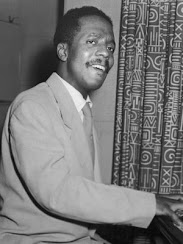 The life story of Earl "Bud" Powell (1924-1966) is not easy to read.  A child prodigy, he was in the forefront of the Bebop movement in the 1940s but a run-in with the police left him battered, bruised, and unconscious. From that time on, at various stages of his musical career, Powell would be institutionalized.  Yet, his musical output rarely suffered.  It was as if a switch would turn on when he sat down to the keyboard.  He could be a dazzling stylist, was an adventurous composer, and, up to the final years of is life, Powell was often a splendid soloist.  Unlike his contemporary Thelonious Monk, his compositions and his recordings have not garnered the same scrutiny, examination, and tributes. Enter Ethan Iverson.  The busy musician, composer, writer, and  performer began a comprehensive study of Powell's ouevre and began writing a piece for quintet and orchestra.  The result is "Bud Powell In the 21st Century" (Sunnyside Records) recorded live on the final days of December 2018 at Umbria Jazz Winter #26. 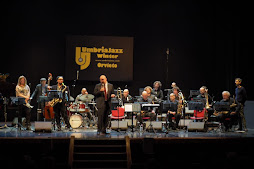 The 16-piece ensemble includes Ingrid Jensen (trumpet), Dayna Stephens (tenor saxophone), Ben Street (bass), Lewis Nash (drums), and Iverson (piano, conduction) plus the brass and reed sections of the Umbria Jazz Orchestra. The program includes seven Powell compositions, one by Monk ("52nd Street Theme"), plus eight Iverson originals, several based on motifs that the composer based on Powell's improvisations. The album opens with the two-part title track ––  "Chorale" has a somber theme but when you listen to the reed and brass interjections, it may remind you of the sounds of Powell's "Parisian Thoroughfare" while "Continuity" jumps out on the strength of Iverson's dancing piano lines. That leads to a delightful romp from Stephens as the backing sections call-and-respond. 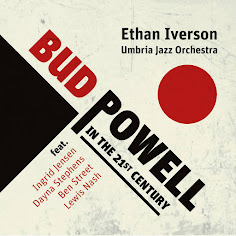 The Bud Powell pieces ("Celia", "Tempus Fugit", "Bouncing With Bud", "Wail", "Dance of the Infidels", "I'll Keep Loving You", and "Un Poco Loco") all stand out. "Celia" swings sweetly and the arrangement with the trumpets playing the theme over Nash's splendid drumming is a treat.  The drummer leads off "Tempus Fugit" with a militaristic take before breaking into a powerful rhythm and we're off. The reeds play the theme, the brass answers, and the musicians romp away.  Sparkling solos from Iverson and Ms. Jensen add more sizzle to this sauce.  The bebop jump of "Dance of the Infidels" has the tenor and trumpet play the theme while Street and Nash build a swinging foundation.  "I'll Keep Loving You" opens with a long, lovely, French Horn feature for Giovanni Hoffer who, after the solo intro, leads the ensemble through the lovely melody (pay attention to the short "breaths" of the reeds during the verses). 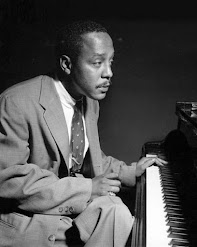 The final two tracks, "Nobile Paradiso" and "Un Poco Loco", are the longest pieces on the program (11:08 and 6:21) and both have great power. The former, an Iverson original, takes ideas from Powell and wraps them in a gentle swing rhythm, bouncy piano, and delightful, melodic, counterpoint from the brass and reeds. The latter track, one of Powell's most covered originals, has a forceful rhythm track –– it's a forceful example of the "conduction" method where Iverson cues the different musicians to step out of the ensemble and make short musical statements.  Over the course of the tune, the reeds play first and, after a brief respite, the brass get their moment. It's fascinating to hear the musicians play off each other, climaxing in a glorious cacophony above Nash's splashing cymbals.  The return to the theme is downright enjoyable!
Don't know much about Bud Powell?  Go find his classic Blue Note recording "The Amazing Bud Powell Vol. I" (you'll end up wanting more but start here) and then come back and listen to "Bud Powell In the 21st Century".  Not only does Ethan Iverson pay his respects, he does what all forward thinking musicians; he breathes new life into the ideas, themes, and musicianship of the originals.  Everyone plays great and the music shines!
For more information and to purchase the album, go to https://sunnysiderecords.bandcamp.com/album/bud-powell-in-the-21st-century.
Here's a taste:
Personnel:
Ingrid Jensen - trumpetDayna Stephens - tenor saxophoneEthan Iverson - piano, conduction (two tracks)Ben Street - bassLewis Nash - drumsGiovanni Hoffer - French horn (on "Un Poco Loco")Daniele Tittarelli - alto saxophoneManuele Morbidini - alto saxophone, conduction (six tracks)Pedro Spallati - tenor saxophoneRossano Emili - baritone saxophoneMirco Rubegni - trumpetFrancesco Lento - trumpetFrancesco Fratini - trumpetMassimo Morganti - tromboneRoberto Rossi - tromboneFederico Pierantoni - tromboneRosario Liberti - bass trombone 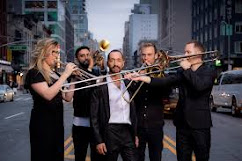 Here's a fascinating combination. "This Land" (Westerlies Records) posits the expressive voice of Theo Bleckmann in a collaboration with the brass quartet The Westerlies (trumpeters Riley Mulherkar and Chloe Rowlands plus trombonists Andy Clausen and Willem de Koch) .  Original material mixed with compositions by Woody Guthrie (four of his pieces), Bertolt Brecht, Joni Mitchell, Phil Kline, a gospel tune and one traditional make the listener sit and think about the power of music to illuminate the human condition.  The expansive musical arrangements allow the brass to "paint the scene" alongside the vocals and the songs often soar. 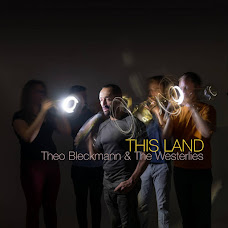 Opening with Ms. Mitchell's "The Fiddle and the Drum" (composed in 1969), the song's anti-war message, originally sung by a Canadian looking across the border, reverberates in this time of internal unrest.  Bleckmann's vocal has just the right emotion and does not sound accusatory while the horns rise and fall behind.  While the title track sounds like it could be a Woody Guthrie tune, the music comes from trombonist Clausen who set the words of the late Kashmiri poet Agha Shahid Ali (1941-2001). Note how Bleckmann uses electronics to create a vocal wind behind the strident horns.  The vocalist contributes "Another Holiday", a song inspired by the mass shooting at Pulse nightclub in 2016. Without mentioning the horrific event, the lyrics speak of how the world passes by as events unwind, as one's family grows up in uncertain times. The horns move from bell-like figures to drones as Bleckmann's electronically modified voices float through the sound.

While each song is notable, there are several beyond the ones mentioned already that really stand out. The traditional "Wade in the Water" is given a dark, mysterious, feel by the horns as they push the vocal to the background.  "In the Sweet By and By", a Gospel tune from the 19th, is linked with Joe Hill's "The Preacher and The Slave" (the satirical lyrics comes from the latter).  The "oom-pah" waltz adds to the comic effect as do the "Salvation Army" trumpets behind the penultimate verse.  Bleckmann translates the lyrics of Bertolt Brecht's "Das Bitten der Kinder", an anti-war song, that is first presented as a recitation and then sung in the original German with the brass playing the role of a string quartet (Bleckmann first recorded the piece in 2008 on the Winter & Winter album "Berlin: Songs of Love & War, Peace & Exile") 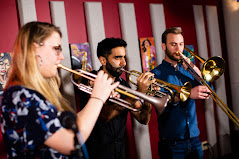 All the Woody Guthrie pieces ("Two Good Men", "Tear The Fascists Down", "The Jolly Banker", and "I Ain't Go No Home in This World Anymore") are instrumentals with only one over 51 seconds long (the rollicking "...Men").  They serve as joyful slices of Americana.
The album closes with Phil Kline's "Thoughts and Prayers" (from his "Florida Man" song cycle) – the piece is an elegy for the victims of the Parkland, FL, mass shooting and was originally composed for Bleckmann.  The title reminds us that that's the most politicians have offered after the multitude of gun tragedies that have occurred over the past decade.
"This Land" is powerful music in these crazy days. Conceived and recorded before the pandemic but in the midst of the Trump administration, the music reminds that the United States has always been somewhat off-center. Theo Bleckmann and The Westerlies make all 15 tracks worth listening to time and again.
For more information, go to westerliesmusic.com.  To hear more and to purchase the album, go to  https://thewesterliesmusic.bandcamp.com/album/this-land.
Here's an important musical statement from the album:
Posted by Richard B. Kamins at 3:41 PM