How We Swing, How We Play 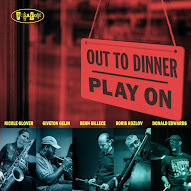 The new album bears the title "Play On". That's the opening track, composed by Gillece, of this 13-song program that features originals from each member of the group plus one song from Stevie Wonder and Lee Morgan.  There's plenty to enjoy from beginning to end.  Gillece's vibes are recorded so well that one feels as if he's playing them in your front room. His moody composition "Something From Nothing" is a fine ballad.  Note how Kozlov's deep bowed bass sounds mesh with the whirling phrases from trumpet and saxophone.  On Wonder's "Visions", it's just Gillece's ringing tones and the bassist's melodic counterpoint and support. There are moments when Gelin reminds this listener of the bluesy tones that made Kenny Dorham was noted for –– check out his delightful solo on his own "Armageddon" and his easy flowing lines on the bassist's "Lew's Loose". 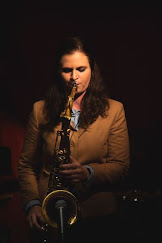 Edwards contributes three of the more fascinating songs on the album.  "Asami's Playland" is a delightful ballad with the tenor sax of Ms. Glover (pictured left) leading the way –– she and Gelin move out front, first playing the melody, and then conversing with the rhythm section as the piece comes to its conclusion.  Gillece's accompaniment is structural, as it is through much of the program; that gives Edwards the freedom to move the song forward. "The Essential Passion" is a powerful hard-bop piece jumps out of the speakers on the power of the drums and the rapid "walking" bass line.  The soloists –– tenor sax, trumpet, and vibes –– each dance gleefully atop the fiery rhythm section.  The third of Edwards's compositions, "The Dream", opens with the vibes alone setting up a gentle, mysterious, feel that turns soulful with the addition of the bass and drums followed soon after by Ms. Glover and Gelin.  Instead of everyone taking solos, the saxophone and trumpet converse in the song's middle.

There's not a dull song on the program.  Ms. Glover's high-powered "Rebecca's Dance" is her only contribution to the album but it's a very good one.  Kozlov is integral to the success of the song with the rhythmical intensity of his "groove".  Note how the composer's solo is quite powerful and how the trumpeter dials back the intensity at the top of his solo.  But Edwards (pictured above) gooses Gelin forward and the solo takes flight.  Gillece starts his solo with a abstract of the melody before he too falls into the drummer's forward motion.  The bassist's "Abe Duct" will remind of the funky jazz of  Horace Silver or Bobby Timmons. Gillece's solo gets right into the groove while Gelin opens his equally funky solo with a variation of "Watermelon Man".  Patrick Cornelius adds a dollop of heat as his solo explores the higher range of his alto sax while Ms. Glover starts her short spot somewhat quietly before adding heat of her own.
"Play On" closes with a high-powered take of Lee Morgan's "Short Count" (from the trumpeter's 1967 album "The Sixth Sense").  Edwards kicks the song into high gear right from the get-go and the song features delightful solos from Ms. Glover,  Cornelius, and Gillece.  It's the kind of high-powered music that begs to be heard in person.  "Out To Dinner" sure is tasty at times plus the music has the right amount of heat.  Dig in!
For more information, to hear more, and to purchase the album, go to https://outtodinner.bandcamp.com/album/play-on.
Hear "The Essential Passion":
Boris Kozlov and Donald Edwards, along with pianist Helen Sung, make up the rhythm section on "Indigenous", tenor saxophonist Diego Rivera's second album for Posi-Tone Records.  The Michigan native, whose first professional gig was in 1999 with the Jimmy Dorsey Orchestra, has had a busy career working with artists such as Kurt Elling, the Lincoln Center Afro-Latin Jazz Orchestra, and the Rodney Whitaker Quartet (among others). Like label-mate (and trombonist) Michael Dease and bassist Whitaker, Rivera is on the faculty of Michigan State University. And, yes, he is the son of Mexican-American parents and, yes, he is named after the great Mexican muralist  of the 20th Century but instead creates sound paintings. 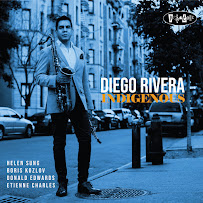 His new album (his fourth as a leader) features 12 tunes of which seven are Rivera originals. His choice of "cover" tunes is surprising and ambitious. The program opens with Cannonball Adderley's "Marabi" which the alto saxophonist composed for his 1968 album "Accent on Africa." Trumpeter Etienne Charles (also on the faculty of MSU) joins the quartet for this tune (and two others) –– needless to say, the rhythm section creates a delightful bop-cum-South African rhythm and the music takes flight. Everyone plays with great passion but note Ms. Sung's splendid solo, the leader's robust tenor lead, and the crisp trumpet sound.  Rivera switches to soprano for a lovely take of Stevie Wonder's "The Secret Life of Plants" (from the 1973 Lp of the same name) –– his rich tone and searching solo, supported by the strong piano work of Ms. Sung, opens the piece right up.  The lovely "Asta Ta Malakia Sou" ("Let Your Tender Hair"), from the Greek composer Michalis Souyioul (1906-1958) starts as a tender ballad with a strong connection between the tenor sax and piano but picks up in intensity as the piece moves forward until its gentle finish.  Rivera goes back to soprano sax for "Sabor a Mi" ("Taste of Me"), a sweet bolero from Mexican guitarist and composer Alvaro Carillo (1921-1969); Charles is featured on muted trumpet throughout and both he sand the leader create fine solos.
Of the originals, the title track moves with the power of John Coltrane's "Resolution" (from "A Love Supreme"). However, this tune was composed in response to the Trump Administration's treatment of various ethnic groups within the United States as well as the treatment of Native Americans by other administrations. When Edwards and Rivera lock in, sparks fly like they did with Coltrane and drummer Elvin Jones.  The delightful "Sombras Del Pasado" ("Shadows of the Past") romps forward on a Habanerá rhythm –– Kozlov dances underneath the soloists, especially the peppery piano dance.  Charles joins with Rivera in dancing the rhythm in and then out while the rhythm section keeps the fire burning.  The quartet embraces the shuffle rhythms of "BLM Plaza" with the tenor sax playing the melody and leading Ms. Sung in for her fine solo. Rivera and Kozlov follow, both digging the blues feel.  "Purpose" is also a blues but instead of a shuffle rhythm, the song jumps forward at an irresistible pace led by the rapid-fire "walking" bass lines and Edwards rock-solid drumming.  After yet another sparkling piano solo, Rivera jumps out and rides the rhythms.  Before the song returns to its opening section, Edwards moves front-and-center.

The program closes with the lovely ballad "Shir LaShalom" ("Song for Peace"), an anti-war song composed by Yaakov Rotblit (lyrics) and Yair Rosenbloom (melody) –– the piece was first played in 1969 by the Israeli Defense Forces Infantry Ensemble and is said to have been been sing by Israeli Prime Minister Yitzhak Rabin right before he was assassinated in 1995.  Rivera plays a powerful solo, a plea for sanity in insane times, his rich, clear, tones rising over the rhythm section.
"Indigenous" is an impressive statement from saxophonist, composer, and educator Diego Rivera.  The support of and interactions with Helen Sung, Boris Kozlov, and Donald Edwards are excellent throughout as is the playing of Etienne Charles.  Can't go wrong with this powerhouse recording!
For more information, go to diegoriverajazz.com.  To hear more and to purchase the recording, go to https://diegorivera.bandcamp.com/album/indigenous.
Here's the title track:
Posted by Richard B. Kamins at 12:31 PM