Pianist/ composer Marc Copland was a good friend of and collaborator with guitarist John Abercrombie (1944-2017) for nearly five decades.  Copland, who started his professional career as a saxophonist, first recorded with Abercrombie in 1972 (an album issued in 1973 titled "Friends" released by Oblivion Records).  Copland was born and raised in Philadelphia, PA, moved to New York City to attend Columbia University and got involved in the music scene. After the release of the album, Copland decided to switch to piano, moving to Washington, D.C. where he worked with many great musicians at the various clubs in the area. He released his first album as a leader in 1988 and has since with many great artists including Kenny Wheeler, Dave Liebman, Gary Peacock, Paul Motian, Drew Gress, and, of course, John Abercrombie –– in fact, the pianist appeared on the guitarist's final two albums for ECM, 2013's "39 Steps" and 2017's "Up and Coming". 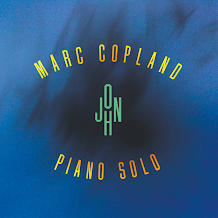 Copland's latest release, "John" (Illusions/ Mirage), is a solo tribute to his friend and also serves to pay tribute to what a fine composer Abercrombie was over his career.  In fact, the nine songs come from a wide swath of the composer's oeuvre. Opening with "Timeless", the title track of Abercrombie's 1975 debut on ECM Records.  It's a beautiful ballad (listen below) whose descending chord pattern has such a wistful feel. Here, Copland creates a Erik Satie-like opening with floating chords that set the listener up for the body of the tune.  The touch of dissonance during the last 90 seconds feels as if we are waving goodbye to the composer before moving into the quiet final few seconds.  The following track, "Isla", comes from Abercrombie's 1982 collaboration with Ralph Towner ("Five Years Later") –– the music has a determined feel as it pushes forward but slows down on occasion as if to take stock of the musical situation.

Three of the tracks come from the two ECM albums that the pianist appeared on.  "Flip Side" possesses a gentle swing and a sweet melody that, on occasion, Copland adds a breezy bounce to.  "Sunday School", like the previous track, was first recorded on "Up and Coming"; the pianist works within the tune's solid structure, imbuing the melody and his solo with the feeling of floating.  "Vertigo", from 2013's "39 Steps", closes the program with the melody first moving around a continuous note in the lower register but soon takes off and you hear the poetry in the phrases and the different shades of colors in the piano solo.
"Love Letter" is an Abercrombie composition that the guitarist played many times in concert but never recorded.  Copland recorded the piece with his trio (bassist Drew Gress and drummer Joey Baron) in 2017 and released on 2019's "And I Love Her."  Here, the music opens in a state of wonder the moves into the handsome melody.  Copland blends chordal phrases with single-note runs, his left hand as active as the right yet the music is not cluttered.  There's a generosity to this performance, to creating moods of wonder and adventure, of happiness and peace.
"John" does great honor to the music of John Abercrombie and to the many memories that Marc Copland made playing alongside and traveling with the guitarist.  Wistful but neither maudlin or sad, the album celebrates music and friendship –– sit down and let the music flow through you!
For more information, go to innervoicejazz.com/artists/marc-copland/.  To listen to more and to purchase the album, go to. https://marccoplandjazz.bandcamp.com/album/john.
Here's Mr. Abercrombie's classic "Timeless":
Kevin Sun, tenor saxophonist, composer, and writer, produced one of 2019's most impressive albums, "The Sustain of Memory."  The music covered a lot of territory over the course of the 2-CDs, 21-song, program.  His followup endeavor, "(Un)seaworthy" (Endectomorph Music), seems modest in comparison: five songs in just over 35 minutes.  Don't be fooled by the album's brevity as there is a lot of music packed into the program.  Featuring his "working" trio of Walter Stinson (bass) and Matt Honor (drums), Sun's material gives both the musicians and the listener much to chew. 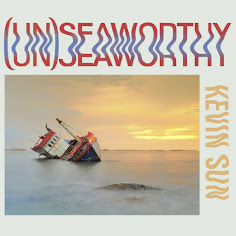 Recorded in Brooklyn, NY, right after the trio returned from a residency in Beijing, China, the musicians dig into the music and create an adventurous program that blends blues, mainstream jazz, delightful solos, and even more delightful interactions.  Listen to how the trio travels through the opening minutes of the first track, "Bad Lady" –– they all play the melody before the bass drops into a two-note patterns and Honor dances around the cymbals as Sun digs into his solo.  As the music moves forward, the foundation expands and Sun joins Honor is quite a dialogue.  "Seaworthy (Unseaworthy)" reminds this listener of the interactions of Henry Threadgill with Fred Hopkins and Steve McCall (in the trio Air). Hear in how Sun moves the melody line over the rhythm section then moves in sync with them. The  tenor sound has hints of Sonny Rollins and Wayne Shorter without imitation.
While it would be fun to describe every track, the avid listener is encouraged to discover the music on his/ her own.  One can really hear the musicians fully involved with the material and "conversing" with each other.  Each one of Sun's compositions is written with these musicians in his mind's ears.  The trio had time to play with these pieces before recording and it shows. There's no clutter, no wasted moments, just exciting forward motion, excellent solos, and the joy of "living" music.  There is nothing unseaworthy, unsafe, or dangerous about "(Un)seaworthy" –– this is a journey worth taking many times as there is so much to hear!
For more information, go to www.thekevinsun.com.  To hear more of the music and to purchase the album, go to https://thekevinsun.bandcamp.com/album/un-seaworthy.
Listen below:
Posted by Richard B. Kamins at 11:50 AM