The last year has been devastating for many people. The pandemic has taken loved ones and that have had no chance to say goodbye or to conduct a proper burial. The music world is no difference, plus much of a performer's livelihood has been cancelled or moved online. In the past 11 months, we have lost a score of musicians and, in the last six weeks alone, the jazz world said goodbye to Stanley Cowell, Frank Kimbrough, and, several days ago, Chick Corea.  In the midst of all the other events vying for our time and empathy, these are striking losses.

On a personal level, both Corea (as well as Cowell) played into my education about creative music, about free expression, about Black History, fusion music, and more.  Corea (pictured left) played with a slew of jazz greats, from Stan Getz to Gary Burton to Anthony Braxton to Dave Holland to Roy Haynes to Mongo Santamaria to Miles Davis to Herbie Mann to Dizzy Gillespie to Herbie Hancock –– the list is very long and equally impressive.  His recordings for ECM, especially his first Return To Forever group, introduced the world to Stanley Clarke (bass) and Flora Purim (vocals) as well as Airto Moriera (percussion) and Joe Farrell (saxophones, flute). When Corea and Clarke went "electric", listeners heard guitarists Bill Connors and his replacement Al DiMeola.  The translucent sounds of "Crystal Silence" with Gary Burton was the template for the "ECM Sound". 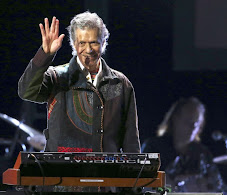 He seemed to tour incessantly over the decades as well as releasing dozens of albums. He moved effortlessly between genres, between acoustic and electric, to trios and solo gigs, jazz to classical to folk and beyond. In the early 1970s, Corea embraced Scientology and never abandoned his belief in the teachings of L. Ron Hubbard. Above all, he was a dazzling pianist, technically one of the finest over the past six decades. There have been many tributes since the news of his passing and more to follow. True, his music lives on, his attention to detail, to his love for interaction, for melody and rhythm, for the joy of playing might be equalled but never surpassed.  While Chick Corea undoubtedly had more music in him, he has left a legacy for all to endlessly explore.

For more information, go to https://chickcorea.com/.

Here's a live version of "Crystal Silence" with Gary Burton: