Looking at the World Through Very Different Glasses

It's endlessly fascinating what music can do for the curious/ avid listener. On one hand, we have a great pianist spending time away from the city to play through the scourge of the pandemic. On the other, a stunning sextet of musicians joined on three tracks by one of the forefathers of British "art rock" exploring a variety of approaches to creative music with words that have many meanings. 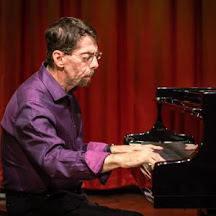 Sixteen years ago, pianist Fred Hersch and his life partner Scott Morgan celebrated their union by building a house in the Pennsylvania woods. It is the place they go to escape the craziness of New York City and to rest in the midst of their very busy schedules. When the pandemic closed down all opportunities to play to a live audience, Hersch began releasing a "Song of the Day" on his Facebook page; after a month, he decided to do a short concert once a week but that only lasted for two weeks. In August of this year, the pianist left Morgan in the city, traveled to their second dwelling, and spent a week recording "Songs From Home" (Palmetto Records).  With help from fellow pianists Benoit Delbecq (co-producer and mixing engineer) and Dan Tepfer plus two piano technicians (Greg Graham and Chris Solliday), the music will certainly warm your heart and soul. 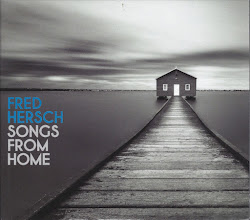 Anyone who follows Fred Hersch knows his programs are always an eclectic mix of standards, "pop" tunes", Thelonious Monk, and originals.  "Songs From Home" is different as there's no Monk and only one original.  It's a mix of standards, jazz works, and delightful interpretations of Joni Mitchell (listen below), Jimmy Webb, and Lennon & McCartney.  The album opens with an introspective take on "Wouldn't It Be Loverly" (from "My Fair Lady")––one could say that this performance is a comment on the lockdown and the desire to get back to some semblance of "normal".  Webb's "Wichita Lineman", one of the finest songs he composed, is filled with love, longing, a prayer for people separated by their jobs.  The one Hersch original "West Virginia Rose" is paired with the traditional "The Water is Wide"; the first melody has the feel of a Randy Newman ballad while the traditional is filled with hope. Kenny Wheeler's handsome "Consolation (a Folk Song)" follows and, like many of the late Canadian-born trumpeter's pieces, has a lovely and expansive melody. Duke Ellington's "Solitude" is an apt choice for this program. One can picture the pianist at the keyboard sifting through memories as he slowly plays the memorable melody.. 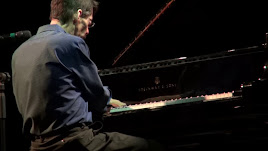 Fred Hersch turned 65 on October 21; the program closes with a jaunty reading on "When I'm Sixty-Four" (he certainly was at the time). Playful and expansive, the performance reminds us all we have much to be thankful for. Yes, times are troublesome, the pandemic rages on, but music is wonderful medicine for the trouble soul. "Songs From Home" may be viewed by some as a response to the pandemic. So be it. To these ears and heart, it's a timeless, highly emotional, and deeply satisfying album that resonates long after the final note rings out.
For more information, go to fredhersch.com.
Listen to Fred Hersch play Joni Mitchell's "All I Want":
One should always expect the unexpected when listening to the many different recordings, ensembles, and pairings that guitarist/ composer Mary Halvorson posits herself in.  Code Girl started as a quintet to create settings for the poems she had been writing. With long-time associates Tomas Fujiwara (drums, percussion) and Michael Formanek (acoustic bass), the guitarist built a front line with vocalist Amirtha Kidambi and trumpeter Ambrose Akinmusire.  The quintet's self-titled debut album was issued in early 2018 garnering critical acclaim for its mysterious blend of improvisational music, "progressive rock", the often-impressionistic lyrics, and the spellbinding vocals. 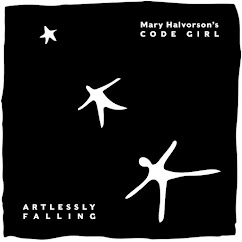 The group's second album, "Artlessly Falling" (Firehouse 12 Records), finds Akinmusire replaced by Adam O'Farrill plus the addition of Maria Grand (tenor saxophone, vocals) and, on three of the eight pieces, the voice of Robert Wyatt. Mr. Wyatt first came onto the British music scene in the mid-1960s as the drummer of Soft Machine, a quartet that created a beguiling mix of jazz, rock, minimalism, and more. When that group splintered, he helped form Matching Mole and embarked on a solo career, his soft vocals blending with his embrace of "free jazz."  After an accident in 1973 left him paralyzed from the waist down, Wyatt regrouped creating a series of albums featuring his idiosyncratic compositions, often-political lyrics, and voice. He came out of retirement to record his vocals for Code Girl, fitting seamlessly into the beguiling, swirling, sounds. 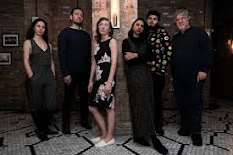 Among the first sounds you hear on the album opener, "The Lemon Trees", are the sweet harmonies of Ms. Kidambi and Ms. Grand. Quiet brush work and simple, foundational, bass notes plus O'Farrill sharp trumpet lines serve to introduce Wyatt's first vocal.  He sings one verse before the trumpeter creates a his own "sing-song" solo. Fujiwara steps out next with a pounding solo before the sextet falls back into the song, Wyatt now double-tracked.  "Last Minute Smears" follows with lyrics taken directly from Judge Brett Kavanaugh's testimony during his Senate confirmation hearing.  The dark ballad, replete with martial drumming and breathy tenor sax solo, is not farcical but does condemn the process with its own words.

Wyatt (pictured left) returns for "Walls and Roses"; he starts off the piece then Ms. Halvorson kicks the piece into a more "hard rock" direction dropping for Ms. Kibambi's verse. After one more "guitar shredding", Wyatt returns and then Ms. Grand sings a verse.  The different voices, tempo and dynamic changes, keep the listener engaged. His third and final appearance comes on "Bigger Flames", an Impressionistic "word painting" with slightly askew strummed guitar chords and trumpet/ saxophone counterpoint. Despite being recorded in England, Wyatt sounds as if he sitting in front of the band.
Tracks such as "Mexican War Streets (Pittsburgh)", "Muzzling Unwashed", and "A Nearing" show the influence of not only Wyatt but also the "freer" side of the late bassist Jack Bruce. The rhythm section is insistent throughout those songs, pulling the ensemble forward urgently. Note how the voices fit seamlessly into the mix of instruments. There are moments in "Mexican War..." that feel influenced by by both Kurt Weill and Black Sabbath!  The lyrics speak to the history and the present in a city ever-changing.  Formanek's percussive then melodic unaccompanied bass sets the tone for "A Nearing" which also stands out for Ms. Kidambi splendid vocal as well as O'Farrill's interactions with Ms. Halvorson, his inventive lines, and how he negotiates the dynamic rhythm section. Ms. Grand also creates a potent solo that is impressive for her in the maelstrom created by the guitar and drums.
The album closes with the title track. Ms. Halvorson's modulated guitar accompanies Ms. Kidambi with the rhythm section swirling up a storm.  Soon, one notices the trumpet and tenor saxophone creating their own swirling lines in their respective corners of the sound spectrum.  Note the change near the end when the rhythm section kicks into a forward gear. The vocalist holds her own in the sonic storm singing right up to the abrupt ending. One should go right back and listen again as there is too much to take in in one sitting.
Mary Halvorson's Code Girl creates its own genre, taking from so many streams of contemporary music. Is it Jazz, is it Rock, Progressive, Art-Rock?  Ms. Halvorson's lyrics are all in different poetic forms e.g the title song is a sestina and the opening track a double tanka.  Call "Artlessly Falling" whatever you want but don't dare ignore it. The music and words are much too beguiling and thought-provoking to be typecast.
For more information, go to www.maryhalvorson.com.  To hear more and to purchase the recording, go to https://maryhalvorson.bandcamp.com/album/artlessly-falling.
Go to the link below to hear the opening track:
https://maryhalvorson.bandcamp.com/track/the-lemon-trees
Posted by Richard B. Kamins at 8:56 AM