Growing up in the 1960s, guitar "heroes" were all the rage (for some of us).  There was Eric Clapton, Jimi Hendrix, Steve Miller, Carlos Santana, Ritchie Blackmore (Deep Purple), Peter Green, Buddy Guy, Jeff Beck, Jimmy Page, and so on.  Every one of these musicians has his own "style", critics and reviewers would argue who's the best or the flashiest or the most overrated/ underrated, and fans would chip in with their own opinions.  While that sort of hype has mostly dissipated, there are still a number of really fine artists from around the world adding their unique voices to the mix. 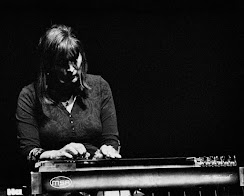 Pedal steel guitarist Susan Alcorn has been playing her instrument for over four decades. She was at a club in Chicago when she first heard the instrument and the sound fascinated her.  The next day, she purchased one and soon was playing in country bands around the Windy City. Moving to Houston, Texas, helped her to learn and to play Western Swing. Ms. Alcorn began to study jazz improvisation and a meeting with composer/ conceptualist/ performer Pauline Oliveros led to a collaboration that opened the eyes of the younger artists to a multitude of sounds and possibilities.  Subsequent meetings with Eugene Chadbourne and German bassist Peter Kowald led to more expansion of creativity; her first album date as a leader or co-leader was with guitarist Chadbourne in 1996––since then, she has issued eleven albums plus appeared on several more.  It was on guitarist Mary Halvorson's 2016 octet album "Away With You" that this writer first heard Ms. Alcorn and her work within that ensemble was ear and mind-opening. 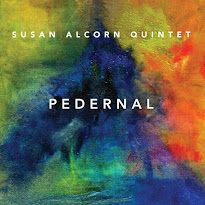 The majority of her albums are solo but her new recording, "Pedernal" (Relative Pitch Records) features the pedal steel player with her friend Ms. Halvorson, bassist (and duo partner) Michael Formanek, violinist Mark Feldman, and drummer Ryan Sawyer.  The music, all composed by Ms. Alcorn, is often soft and slow; yet the quintet also gives the interactions power while creating intelligent, far-ranging, solos.  The title track opens the program.  It's a delightful blend of folk, country, classical, and blues influences with a touch of anarchy at times. The blend of electric and pedal steel guitars and players not afraid to stretch notes and ideas makes one pay closer attention. Feldman's sweet violin tone is a handsome –placed on the right side of the mix with Ms. Halvorson on the left (Ms. Alcorn is in the center), the violinist can both stand out and blend in.
That opening song sets the tone for the entire album. "Circular Ruins" has a somber first several minutes before opening up to Ms. Halvorson's sparring with the bass and drums. A moment later, Feldman takes over the match.  The leader joins in as well.  "R.U.R." has a boppish feel in its quick tempo; its first set of solos features angular swift lines. The pace slows down in the second of the piece for a rubato, spacey, group of interactions, that break down to duos (pedal steel and drums, drums and guitar) and occasional interjections from the leader and violinist before returning to the main theme.
The centerpiece of the album is the 13+ "Night in Gdansk", a episodic piece that runs the gamut in dynamics, in melodic interplay, its interactions and counterpoint giving way to short unaccompanied transitions. There's mystery within this music, the plaintive violin melodies, the guitar duo with lines that connect then spin away from each other, how the drummer and bassist are both foundation and colorists to the sounds above them in the mix. There's a lot to take in on the initial listenings––hit "repeat" when you hit the final note, start over, and you will slowly but surely begin to see the overall shape of the piece.
The program closes with the delightful, playful, folk/bluegrass influenced "Northeast Rising Sun" where everyone gets to let loose.  Ms. Alcorn sits back, letting Ms. Halvorson and Mr. Feldman gleefully solo over the scampering rhythm section before she reenters her most playful solo.  A short, melodic, bass solo leads us back to the original melody and the sweet close.
Susan Alcorn and her excellent musical companions have produced a splendid album, emotionally rich yet adventurous, and ultimately satisfying. If you have never heard the pedal steel guitarist, start with "Pedernal" but make sure to check out her fascinating solo albums (2015's "Soledad", also on Relative Pitch Records, is especially rich music).  Pay attention and the rewards are copious.
For more information, go to www.susanalcorn.net/recordings.  To listen to more and purchase "Pedernal", go to https://relativepitchrecords.bandcamp.com/album/pedernal.
Here's the opening track:
Guitarist, composer, and educator Alex Wintz is one busy person. Between gigs with Etienne Charles, Roxy Coss, and Nick Finzer, his own trio, and private lessons, the California native (raised in New Jersey) stays quite busy.  The current pandemic has certainly slowed down the gigs but not the teaching.  While he appeared on numerous albums, Wintz has only one recording as a leader––2017's "Life Cycle" (Culture Shock Records)––to his name. That album featured his Trio, bassist Dave Baron and drummer Jimmy MacBride, plus guests Lucas Pino (tenor saxophone), Victor Gould (piano), and Ben Williams (acoustic bass) on selected tracks. 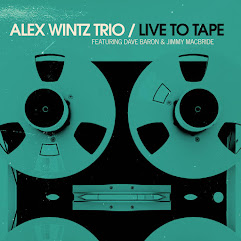 In January of 2019, a recording engineer friend of Wintz made the offer of six hours in the studio. The guitarist brought the trio in to Red Bull Studios; they had been playing as often as they could and had built up a good-sized repertoire.  They set up, did a quick sound check, and started recording. As the title tells you, these sessions are "Live to Tape" and Finzer's label, Outside In Music has issued the results on vinyl, CD, and digital downloads.  No overdubs, only a few takes (at most), the seven-song program consists of four Wintz originals and one piece each from Herbie Hancock ("Textures"), Annie Clark/ St. Vincent ("What Me Worry"), and Herbert Martin/ Michael Leonard ("I'm All Smiles").  The recording and mix (Evan Sutton) posits the listener in the middle of the Trio and, while there's no crowd noise or words from the leader, one feels as if he is in concert space.

Clicking, percussive, guitar leads the Trio and the listener into "Idris", a tribute to the late drummer Idris Muhammad (1939-2014) who imbued every fast song he played with an irrepressible dancing beat. MacBride is right on top of the beat throughout and his bandmates dance with glee. "Textures", composed by Herbie Hancock for his 1980 "Mr. Hands" Lp, dances gently in a Caribbean mode (the composer's version mixed synths with acoustic piano)––the melody is quite lovely and the rhythm section gives it an Ahmad Jamal-feel.  The St. Vincent composition follows; the trio treats the ballad respectfully giving the song a bluesy shade a la Jimi Hendrix's "Little Wing".

The straight-ahead jump of "Ely, MN" (a Wintz original) allows the band to gallop ahead although there are numerous momentary slowdowns on the way. MacBride and Baron do a great job of push the music forward with the guitarist complying with a hard-driving solo.  The drummer also gets to step out which he does with great force and style.
"Live to Tape" closes with "I'm All Smiles", a perfect tune in that the music on this album will make you do just that––smile.  This album is the perfect Friday or Saturday evening experience.  At the end of a long week, turn down the lights, pour a libation, sit back and let the delightful sounds produced by the Alex Wintz Trio wash away the week's detritus.  No deep messages on the album; in fact, just one and that could be "take it easy and enjoy!"
For more information, go to www.alexwintzmusic.com/.  To hear more and purchase the album, go to https://alexwintz.bandcamp.com/album/live-to-tape.
Here's the Trio with the Herbie Hancock piece: 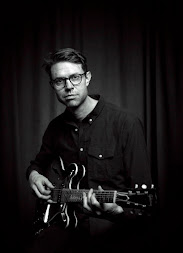 When the pandemic hit in earnest back in March, many countries closed down, limiting access to restaurants, theaters, clubs, stadiums, schools, airports, shops, and just about every place where people congregate.  Many of us wondered then how artists would respond to this major threat to their livelihood. Musicians are adapting to online concerts, a number of venues have opened to present concerts but the audience is only allowed in via the Internet. Musicians are figuring out ways to record at home.  In April, we read reports of musicians streaming short "concerts" every day or week plus others who lived in cities stepping out on their balconies or onto the streets in front of their domiciles.  In warmer climes, groups have performed in large public spaces but few, if any, will play to a crowd indoors for a while longer. 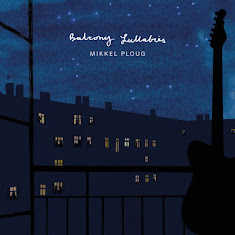 Danish guitarist and composer Mikkel Ploug, who has worked on both sides of the Atlantic Ocean with artists such as Kenny Wheeler, Pete Robbins, Mark Turner (their 2018 duo album "Faroe" is a quiet gem) and a host of others, was ensconced in his apartment at a loss for ideas. Two weeks into the shutdown, Ploug opened his balcony doors in the early evening, put his amplifier and a chair out there and proceeded to play a lullaby for the neighborhood children. The response was immediate and overwhelmingly positive so he continued every night for the next month.  Soon, the videos he recorded of each performance went viral so Ploug started a Kickstarter program to raise money to record these Danish lullabies and "pop" standards in a studio setting.  The result is the truly lovely "Balcony Lullabies" (Stunt Records). 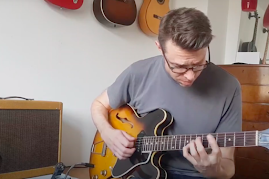 The 13 songs include nine traditional songs plus "Julia" (The Beatles), "Somewhere Over The Rainbow" (Harold Arlen), "The Nearness of You" (Hoagy Carmichael), and "You are My Sunshine" (Jimmie Davis/ Charles Mitchell).  There are not "bravura" performances, recorded to show off the guitarist's versatility but they do show he can adapt material to his solo guitar and make it meaningful to any audience.  Whoever listens will find their own favorites but keep in mind that there are "lullabies", pieces of music that allow your mind to wander. The sound of Ploug's acoustic and electric guitars is lovely throughout and one wishes he lived nearby so that the music could waft through the windows of the house.  He had previously recorded a solo album (the all-acoustic "Alleviation" in 2017) that is also worth exploring.
The pandemic has scared many of us, forced us to retreat and think only of ourselves. "Balcony Lullabies" reminds us that we should not abandon our neighbors and have empathy for those separated from their families, for those younger ones who cannot connect with their friends or continue their education in a proper setting. Will this worldwide problem help us appreciate patience? Who knows? In various places, pandemic "fatigue" has created an upsurge in cases but art can remind us of the best in people. Mikkel Ploug, has created a delight-filled interlude, escape if you will, from the madness.
For more information, go to www.mikkelploug.com.  Go to sites such as amazon.com and iTunes to for purchase options.
Here's the "live" version of the album's final track (recorded 4/15/20):
Posted by Richard B. Kamins at 3:03 PM