Three more albums which feature guitars in different settings are featured in this post––each one has its own strengths and should interest the curious listener.

Will Vinson (saxophones, electric piano), Gilad Hekselman (guitars), and Antonio Sanchez (drums) have created an album for Whirlwind Recordings with the punning title Trio Grande. All three have crossed borders to make New York City their base with Vinson coming from Great Britain, Hekselman from Israel, and Sanchez from Mexico.  They are at the top of their game; this album illustrates how each brings different styles and how they have so much fun "playing" with melody, sound, dynamics, and more. 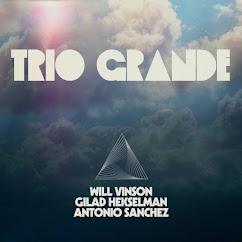 Even though there is no bassist, the first sounds one hears is the keyboard bass on the drummer's "Northbound".  The feel and sound of the piece may remind some of Marc Johnson's Bass Desires but with a soprano sax in place of one of the guitars in that group. The joy is in the interplay, the chuckling as well as expansive playing of Hekselman juxtaposed with Sanchez's dancing drums.  The opening moment of the guitarist's "Elli Yeled Tov" (Good boy, Elli) sound like a piece by Lionel Loueke, especially the tone of the guitar. Again, it's Sanchez playful drums that capture one's attention as does Vinson's delightful alto sax solo.  Vinson's "Oberkampf" is a melancholy ballad with the feel of a Joni Mitchell piece. The soprano sax solo near the end of the piece has a more optimistic feel, lifting the energy of all involved. 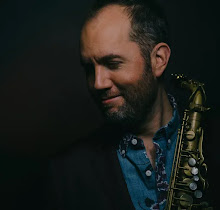 Other highlights include Hekselman's super-funky "Scoville" which bops along atop Sanchez's conversational drums. The raucous guitar solo features stop-and-go rhythms which the drummer executes like a race car driver.  The drummer's "Firenze" (the Italian name for Florence, Italy) is a handsome ballad, its fine melody lines pushed forward by the alto saxophonist who dashes off into an energetic solo.  Sanchez's spare solo is a treat, he interjects silence into the spot while the sax and guitar move melodically behind him.

"Trio Grande" closes with the guitarist's "Will You Let It", a lovely ballad with an emotional melody, a splendid guitar solo which has a touch of Bill Frisell in Hekselman's solo.  The sparkling cymbal work surrounds the other instruments with a glowing effect.  The really fine aspect of this album from Will Vinson, Gilad Hekselman, and Antonio Sanchez is that the music defies categorization––is it Americana, jazz, rock or is it all that and more?  Go with the latter and just listen and enjoy!

For more information and to purchase the album, go to https://triogrande-whirlwind.bandcamp.com/album/trio-grande. 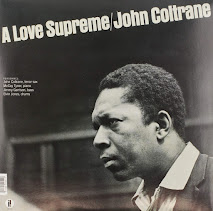 I first heard "A Love Supreme" by the John Coltrane Quartet in the summer between my freshman and sophomore years of college, basically 1967, the "Summer of Love".  The music was unlike anything I had listened up until then, having cut my teeth on AM radio and enamored of The Beatles and The Kinks.  The person who played the album for me had been searching for new music and had been blown away by Coltrane's declaration of spiritual love and devotion.  The album was my personal door that opened up within the next few years to Miles Davis, the AACM, Chick Corea, ECM, and beyond.  Over the years, there have been versions by Turtle Island String Quartet, the Branford Marsalis Quartet, and others plus various recordings of particular movements––a favorite is Kurt Elling's brilliant take of "Part II: Resolution" that he recorded in 2004.

Drummer John Hanrahan (born December 9, 1966–two years to the day that the Coltrane Quartet recorded the album) had interviewed the group's drummer Elvin Jones in 2003 who led him to Ashley Kahn's incisive history of the album. That whetted the younger drummer's appetite and when he moved back to Chicago, he formed A Love Supreme Quartet. In 2017, Hanrahan met guitarist and conceptualist Henry Kaiser who introduced the drummer to Coltrane's 1966 album "Meditations" which many people, including the guitarist, feel is the "spiritual follow-up" to "A Love Supreme." The newer Lp, recorded nearly a year to the day after "...Supreme", added the musical voices of saxophonist Pharoah Sanders and drummer Rashied Ali to the Quartet––the sessions would the last time Coltrane recorded with Elvin Jones and pianist McCoy Tyner. 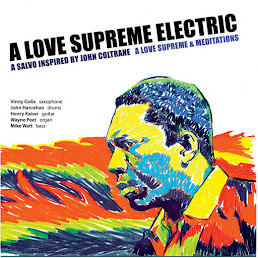 Kaiser and Hanrahan formed a quintet with saxophonist
Vinny Golia, electric bassist Mike Watt, and organist Wayne Peet. They went into the studio on February 19, 2019, and recorded the two-CD set "A Love Supreme Electric: A Love Supreme & Meditations" (Cuneiform Records). Subtitled "A Salvo Inspired by John Coltrane", the music captures the power of the original pieces and pushes the volume.  Instead of the steadying piano of Tyner, Kaiser's often-raucous guitar is the "second voice" while Peet takes on the pianist's supporting role.  His organ work hearkens back to the sounds of the Black Church but with a modernist twist. He does "fill out the sound" nicely.  Golia, an impressive musician who's the dean of the New Music scene in Southern California, does not try to play like John Coltrane and, unlike the great master, does play soprano saxophone on several of the suites movements. He sets the tone on the opening "Part 1: Acknowledgement", producing his own fiery sounds.  Mike Watt, a veteran of rock bands such as Minutemen and Firehose (currently, he's working with guitarist Mike Baggetta), is a steady presence, making sure his bandmates and listeners do not miss the four-note foundational bass line throughout the opening suite.
Hanrahan (pictured left) opens "Part 3: Pursuance" with a 3 minute-plus solo that really builds in intensity until Golia (on tenor) jumps into the theme before taking off into a powerful solo. Kaiser's off-balance attack and mighty roar comes next, with a call-and-response with the over-amplified Yamaha organ of Peet as Golia's baritone joins in the fray.
"Meditations", the lesser known of the two works, has more dynamic variety yet still has moments that rattle the rafters. Peet's organ has a more prominent place in the performance; his interactions with Watt and Hanrahan, especially on Love", stand out. He joins the fray on "Consequences" connecting with Kaiser and Golia to create a fascinating three-way conversation while the bassist and drummer create a maelstrom.  The beat falls out in the middle, the volume drops out, and Golia steps up.  "Serenity" opens quietly with Golia's tenor weaving in and out of the curious guitar sounds and Watt's bass serving as counterpoint.  Hanrahan's solo is next and it has definite bounce and shape before the quintet crashes into a noisy, free-style, reprise of the opening section of "Meditations" titled "The Father and The Son and The Holy Ghost."  The music is harsh with little reprieve but, like the original version, the overall performance can serve as a cleansing.

CD 2 and the program closes with "Acknowledgement reprise", another take of the opening movement of "A Love Supreme."  Recorded at the same session, this take features Golia on both tenor and soprano sax plus a fine organ solo.  The song ends as the the opening of the program started, witg John Hanrahan striking a gong.
"A Love Supreme Electric" uses the power and the glory of the original performance by the John Coltrane Quartet, expands its sonic blueprint, reminding us of how timeless this music is.  The volume of this music may put some listeners off but do listen to these fine artists make this music their own, doing so with respect and wonder.
For more information and to purchase the album, go to  https://cuneiformrecords.bandcamp.com/album/a-love-supreme-electric-a-love-supreme-and-meditations.
Here's the opening track: 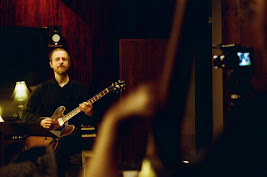 One can tell from the title of the new album, "Forest Standards Vol.2" (BIG EGO Records), from guitarist and composer David Lord that this is not his debut album.  In fact, from his home in Wichita, Kansas, he has recorded solo guitar album under the monicker Francis Moss and with the groups The Wonder Revolution and Miki Moondrops. 2018's "Forest Standards Vol. 1" featured Chad Taylor (drums, mbira) and Devin Hoff (acoustic bass)––Taylor returns for "...Vol.2" but the bass chair now is filled by Billy Mohler plus guitarist Jeff Parker shows up on eight of the 14 tracks. 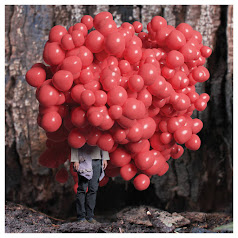 What's fascinating about this album is that the music moves in unexpected directions; the liner notes (written by Dave Segal of Seattle, WA's newspaper The Stranger) explain that Lord wrote all the tunes in the Lydian mode and how that changes how the pieces resolve.  Listen to how Mohler and Taylor create the flow on the opening "Cloud Ear"––Lord and Parker weave their guitar lines in and around each other in a gentle manner.  Chad Taylor, who can push a group with the best of them is often understated yet still helps to propel many of the pieces.  His rhythmic dance on "Conifer Tuft" has a lightness as well as an urgency.  The two guitarists take turns on solos but also support each others.  Vibraphonist Sam Hake joins the quartet on several pieces include "Coltricia" where Lord overdubs his guitar lines but opens the middle for the ringing vibes. 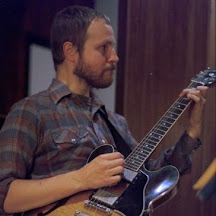 There's a gentle yet probing quality to many of the pieces. The fine duet of Parker (electric) and Lord (acoustic), "An Amanita", allows the former to move around the sound spectrum like a wild while the latter keeps the structure of the piece.  Hake and Lord handle the melody on "Nectaries" but you should also attention to Taylor's excellent brush work and Mohler's counterpoint as well as the backwards guitar loops at the end of each verse.  Even though many of these pieces are short in duration, they are long in attention to melody and detail. Both Parker and Lord overdub multiple guitars on "Mossy Maze Polypore" and the textures mixed with quiet background noises first pull the listener in then make one pay attention to the various sounds.
One's appreciation of "Forest Standards Vol 2" grows each time you listen.  This is not music for one impressed by flashy technique but for people who love to hear finely constructed music that embraces melody and experimentation.  David Lord and his talented associates want you to take your time with this music––the sonic experience is well worth it!
For more information, go to www.foreststandards.com.  To listen to the album and for purchase information, go to https://davidlord.bandcamp.com/album/forest-standards-vol-2.
Here's "Nectaries":
Posted by Richard B. Kamins at 6:26 PM