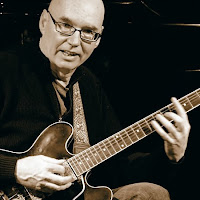 Toronto, Canada-based guitarist Ted Quinlan has had a successful and busy career spanning almost four decades.  A graduate of Berklee College of Music in Boston, MA, the guitarist, composer, and educator has played with Chet Baker, Freddie Hubbard. organist Jimmy Smith, Dave Holland, and a slew of Canadian musicians. He's the longtime head of the Guitar Department at Humber College in Toronto.  His debut album was issued in 1998 and followed that 11 years later with a trio recording.  In 2010, he co-led a recording date with pianist Brian Dickinson; for the most part, Quinlan takes his time to plan his recordings.  His discography shows a baker's dozen or more sideman dates over the past 20 years. 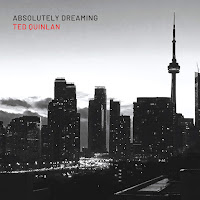 Late in Fall 2019, ADDO Records issued "Absolutely Dreaming", a nine-song program that features Quinlan's longtime friends and associates Kieran Overs (bass), Ted Warren (drums), and pianist Dickinson. On initial listen, it may remind some of the music John Abercrombie made on ECM with his quartets featuring pianists Richie Bierach and Marc Copland. Quinlan, like Abercrombie, has a warm electric sound and is very melodic.  But, listen harder. Listen to how the other musicians support and move the music forward, how they engage in conversation with the leader and each other.  Pieces like the opening "Cheticamp" (named for a town on Cape Breton) and the title track pull the listener along. This music is a soundtrack for colorful dreams, for long walks into the woods and back again, along the banks of rivers and lakes. It's far from soporific. Listen to the harder beat and thicker guitar tones of "X Marks The Spot", goosed higher by the raucous drumming.  Dig the bluesy feel of "Twilight Sky" – the opening guitar tones bring Larry Carlton's sound to mind plus do not ignore the fine bass work, the splendid cymbal work, and Dickinson's rippling piano phrases. Even on the handsome ballad "Babylon" (named for the town on Long Island), the musicianship keeps one alert throughout,

Quinlan strums an acoustic guitar to lead in the final track "La Bionda", a really lovely way to close an excellent program. "Absolutely Dreaming" is 62 minutes+ of music that will excite you, calm you, warm you, and make your day better. Intelligent, charming, and very musical, the album shows Ted Quinlan not only to be a fine guitarist but also an excellent composer and bandleader.

For more information, go to tedquinlan.com.

Bassist and composer Massimo Biolcati may be best known for his work with guitarist Lionel Loueke and drummer Ferenc Nemeth in the trio Gilfema (which morphed into the Lionel Loueke Trio when the guitarist signed with Blue Note Records).  Biolcati met the other two musicians when all were in attendance at The Berklee College of Music; all three went to the Thelonious Monk Institute of Jazz in Los Angeles. By then, they are a working trio landing a contract in 2004 with ObliqSound Records where they recorded two albums (and Loueke issued his first solo album on which the other two appeared). Gilfema will issue a new album later this year. In the meantime, Biolcati has been busy as a sideman and producer.  He's worked with the Hornē Electric Band, drummer Matt Slocum, and Luciana Souza (among others). 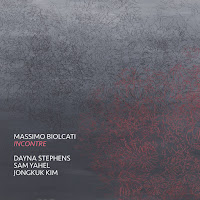 "Incontre" (Sounderscore) is Biolcati's first album as a leader since 2008's "Persona" (ObliqSound) and features Dayna Stephens (tenor and soprano saxophones), Sam Yahel (piano, organ), and Jongkuk Kim (drums).  The nine-song program features four originals by the leader, four standards, and Dave Holland's "How's Never" (which the composer first recorded in 1995 with the Gateway trio). The album opens with Biolcati's "Hello, I Lied" which the composer with a circular bass line – the snap of Kim's drums, the melody "sung" by the tenor sax, and the sharp funk of Yahel's piano solo moves forward with delight.  Stephens steps out into his solo with the bassist egging him on before the piano and drums kick back in.  The saxophonist breaks down the melody into short, rhythmical, phrases before heading back to the main melody. The bassist takes the song out the way it began. 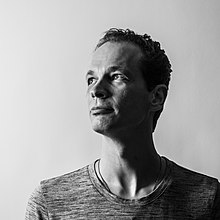 The next four tracks are the "standards."  First up is Thelonious Monk's "Boo Boo's Birthday" which dances along on the bassist's active "walking" lines and Kim's delightful dancing snare drum.  Charlie Chaplin's oft-recorded "Smile" finds Stephens on soprano sax and Yahel on organ.  The piece has a funky feel with interactions between the front line and the rhythm section that keeps one alert.  The quartet then moves into "Everybody Wants to Rule The World" (from Tears For Fears) and really have a great time playing around with the changing tempos. Listen to the dancing drums and bass beneath Yahel's piano solo; Kim then engages in a dialogues with Stephens during the sax solo while the pianist and bassist keep the song moving. Yahel goes back to organ for Charles Mingus's "Duke Ellington's Sound of Love" – the inherent blueness of the piece shines right through the slow shuffle beat while the organist moves through the melody.  Stephens's muscular tenor solo brings Coleman Hawkins to mind.

The balance of the recording has three tunes from the bassist and the Holland piece.  The title song is  a handsome ballad with an emotionally rich melody and excellent solos from Stephens, Yahel, and Biolcati.  "How's Never" rides forward on the snappy drums and bass with Yahel's organ sounds meshing nicely with Stephens's singing soprano sax.  "Fellini" is another fine ballad piece with a nicely-sculpted melody line (first played by the tenor saxophonist).  Yahel's acoustic piano solo creates a short yet finely painted portrait before Stephens takes over and creates his own strong audio painting.  The album closes with "Birthday Song, Almost" – this melody is also well-formed, allowing the soloists to build intelligent solos and the rhythm section to take chances with the tempo, the accents, and the intensity.  After Stephens's fine tenor solo, Kim takes over for a solo that raises the heat without over-baking the song. In fact, the tune and the album end on a high note.

"Incontre" is a delight from start to finish. All the musicians ask is that you listen with open ears and open minds. The material Massimo Biolcati chose for this session covers a lot of territory without getting mired in one genre.  The intelligent musicianship and the bright sound quality both serve to remind the listener that creative music can be fun, exciting, contemplative, and rewarding for all involved.

For more information, go to www.massimobiolcati.com.