Trumpeter, educator, and artist Jamie Breiwick has made a name for himself over the past two decades in each of his chosen fields.  His artwork adorns many albums by Mid-Western artists including those on Shifting Paradigm Records (as well as the cover of the Lesser Lakes Trio of which he is a member).  He has worked with numerous artists in the Milwaukee area including Matt Wilson, saxophonist Ralph Bowen, and pianist David Hazeltine.  Breiwick has taught and directed ensembles in several different schools and is  currently on the faculty of the Prairie School in Racine, WI. 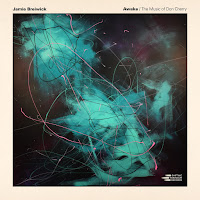 His new release for Shifting Paradigm is "Awake/The Music of Don Cherry" and features the trumpeter in the company of bassist Tim Ipsen and drummer/engineer Devin Drobka (also a member of Lesser Lakes). The tribute to the great pocket trumpeter, member of the Ornate Coleman Quartet that recorded for Atlantic Records, and a world traveler, features six songs (plus two "alternate" takes) from Cherry's repertoire.  Breiwick doesn't attempt to "mimic" the elder trumpeter's style; instead, he and his rhythm section move inside the music with passion and excitement, making it their own.  Check out the trio's journey through "Awake Nu" (composed for Cherry's 1966 Blue Note Lp "Where Is Brooklyn?"). The trumpeter romps throughout as the bass and drums roil and rumble.

Before joining Colin Wolcott and Nana Vasconcelos in 1978 to record and tour as CODONA, Cherry recorded "Hear & Now" for Atlantic Records.  Breiwick and company take one tune from that album, "Mahakali", remove the South Indian sounds and replace them with a funky backbeat, making it feel like a dance tune.  There are two versions of "Art Deco" from the 1989 album of the same name for A&M – that album paired with the rhythm section from several of Ornette's Atlantic Lps, bassist Charlie Haden and drummer Billy Higgins.

"Awake/The Music of Don Cherry" hopefully will push younger listeners to discover the work of Don Cherry (1936-1995) as well as discover the impressive recordings of Jamie Breiwick.  This album s short – with the two alternate takes, it's just under 33 minutes – and it certainly leaves the involved listener wanting more. That said, listening to this music will be time well spent!

For more information, go to jamiebreiwick.net.

Bassist, educator, and composer Jeff Denson first came to critical notice in the early 2000s as a member of a trio with Berklee classmates Florian Weber (piano) and Ziv Ravitz (drums). The threesome toured and recorded with alto sax legend Lee Konitz.  Denson went to earn his graduate degrees at Florida State University and the University of California/San Diego where he studied with and befriended fellow bassist Mark Dresser. The bassist is currently on the faculty of the California Jazz Conservatory. He has recorded a slew of albums as a leader, co-leader, and sideman plus started his own Ridgeway Records in 2015 – the label's initial release featured Denson's trio backing Lee Konitz. 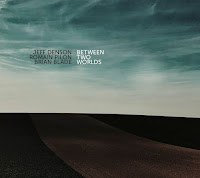 The label's latest release is "Between Two Worlds" credited to the trio of Denson (acoustic bass), Romain Pilon (guitar), and Brian Blade (drums).  Pilon, a native of France, and Denson have been friends for over two decades, working together on ideas that led to bringing Blade, who is one busy musician and first met the bassist in 2017 when they were the rhythm section for guitarist Joel Harrison's "Spirit House", into the mix to record the 10 songs – five each composed by Denson and Pilon – that make up the album.  At first glance, one might wish to compare this trio with the one that recorded with Pat Metheny on 1976's "Bright Size Life" but the newer recording is quieter, more contemplative, but no less interesting. 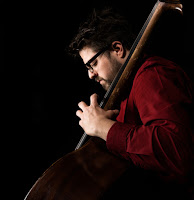 While each track is unique, it's best to first listen to the program without trying to pull it apart.  Listen to how melodic both Pilon and Denson are as composers and soloists as well as how Blade easily, often quietly, moves the music forward.  You'll notice how these songs are three-way conversations, how supportive each person is underneath the solos, and how no one person hogs the spotlight.  When you go back on further listens, moments begin to stand out.  one has Blade's unaccompanied opening to Denson's "Listen Up" sets the pace for what follows and never loses its forward motion when the bass and guitar enter.  Dig the playing of the drums and guitar beneath Denson's solo. Pilon's "Generation" opens in ballad setting yet picks up in intensity during the guitar solo.

The title track, composed by Denson, is a spotlight for the bassist's impressive arco playing, his solo rising above the guitars (Pilon overdubbed) and Blade's melodic drumming.  The musicians don't rush through the ballad, allowing the contemplative mood to spread gently through the sound spectrum.  Listen to the song posted below to hear how the trio interact, how they change direction naturally, and always pay attention to the overall sound and mood.

"Between Two Worlds" will grow on you.  The music does not explode one's ears as much as it expands in the mind.  Give the music the attention it deserves and you will be rewarded!  Kudos to Jeff Denson, Romain Pilon, and Brian Blade!

Here's a cut for your edification and enjoyment:

Check out the video below for even more information (and to enjoy Brian Blade's delightful smile):