Every year in January, a package from pianist Matthew Shipp arrives in my mailbox.  2020 is no exception other than two packages have shown up this year.  The first mailing included two new albums (see below) that feature Shipp with longtime associate, saxophonist Ivo Perelman.  The two have recorded numerous albums as a duo and in a trio and quartet setting.

In 2017, Perelman and Shipp put together a session for Leo Records (the saxophonist's "home" for releases) featuring bassist William Parker and drummer Bobby Kapp.  That recording, "Heptagon", included seven spontaneous musical conversations pushed forward by the inclusion of the (then 75-year old) drummer who Perelman first heard on Argentinean-born saxophonist Gato Barbieri's 1967 debut on ESP-Disk "In Search of The Mystery." The Brazilian native Perelman was greatly inspired by Barbieri's fiery tenor sax tone and headlong rushes into "free" music and, for his own recording, wanted to mine the expertise and imagination of the American drummer. 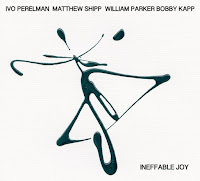 In April of 2018, the quartet came together again in Brooklyn, NY, and the results of their collaboration can be heard on "Ineffable Joy."  This time, it's ESP-Disk that has released the album, the label that Perelman first heard Barbieri, the one Kapp had also recorded with saxophonist Noah Howard, the label on which bassist Parker recorded in 1973 with saxophonist Frank Lowe, and where Shiop has releasing albums since 2015.  With song titles such as "Ecstasy", "Ebullience", "Bliss", "Elation", and "Exuberance", one can certainly tell the moods that permeate the music.  Yes, these pieces are all improvised and that freedom opens the door for the musicians to let the music go in multiple directions.

My suggestion to the listener is just sit and listen; let the music flow around you, listen to the conversations between the rhythm section and the front line, notice how crisp and articulate Shipp's piano playing is, and how Perelman's sound can go from a. ferocious shout to a sweet, Ben Webster-style crooning.  There are moments on each track that stand out.  For instance, right after Perelman enters on "Jubilation", the rhythm section picks up in intensity, giving the saxophonist a push into a dynamic interaction – pay attention to how Shipp responds, to how he joins the bass and drums to raise the intensity level.  Yet, this music breathes so many times the dynamics change on a dime.  The beauty of the opening moments of "Elation", the quiet intro suggesting a 1940s Duke Ellington ballad which Perelman underscores with his melodic work.  The delight that jumps out of the speakers when the quartet is dancing through "Rejoicing" is palpable and soul-satisfying (listen below).

One may remember how, in the 1960s, music as free and adventurous as "Ineffable Joy" was just considered "noise", "emotionless", and "alien".  But, if life was all one emotion, one energy level, one voice above all, it would be dull.  Five+ decades later, the energy, emotion, and melodic strength that Ivo Perelman, Matthew Shipp, William Parker, and Bobby Kapp bring to this project is reason to celebrate.

Here's music that to replenish your soul:

As I stated above, Matthew Shipp and Ivo Perelman have a recorded a slew of albums especially in duo settings.  Listen to any one of them and you hear how the two musicians play off each other, inspire each other, push, pull, and dance together.  They first connected in 1996 but it was not until 2011 that the duo began a journey that has produced many recorded conversations – the musicians as well as the audience do not feel as if these musical adventures has reached its zenith.  Is it because they are the same age (the saxophonist is five weeks older than the pianist) or that they have often mined similar veins (duos of saxophone and piano)?  Whatever the connections, the music they create is exciting, emotionally strong, adventurous, and beyond categorization. 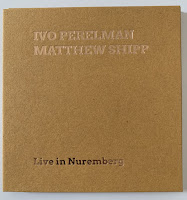 In June of 2019, as the duo were in the midst of a tour celebrating Perelman's thirty-year career, they appeared at "The Art of Improvisation", one of a series of music festivals held throughout Germany.  The duo's one-hour June 26 concert can be heard on "Live In Nuremberg" (SMP Records) – it's a delight to sit and listen as the music tumbles out of the speakers, the many changes in direction, the passion of the conversation so handsomely captured by recording engineer Gerhard Grell.

This music moves in many directions throughout its hour on the stage so the best way to "hear" the music is to let it flow.  You will find moments that soothe you, that excite, that are furious, that are deeply melodic (almost lullaby-like at times) – it's not music for the faint-hearted but for the adventurous listener, one who will hear something different each time he or she listens, how both musicians follow and lead, how they inspire each other, how they anticipate, and how they sing.

Yes, there are many recordings of the Ivo Perelman/ Matthew Shipp duo and each one has its own magic, mysteries, and rewards.   The album only has two tracks; "Part 1" is 55:45 long followed by the four minute "Encore", the delightful epilogue.  "Live in Nuremberg" is the latest document of the musicians' conversations and well worth exploring.


Here's the duo in concert the day before (thanks to somethingelsereviews.com for leading me to this concert):