For more than five decades, vocalist Norma Winstone, born in London, England, has been creating music in settings that range from big band to quintets to trios to duos. She may be best known for her association with trumpeter Kenny Wheeler and pianist John Taylor (the trio recorded for ECM Records as Azimuth) plus her duo work with her former husband Taylor as well as with Fred Hersch. 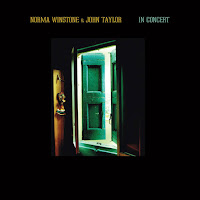 While her marriage to Taylor did not last, their musical partnership was particularly active in the 1980s and 90s.  "In Concert" (Sunnyside Records) is a reissue of a August 1988 concert Ms. Winstone and Taylor made at the end of a summer teaching job in London. Originally released in 1999 on Britain's Enodoc Records, it's a splendid collection of songs the duo put together on the fly.  The program features songs by Leonard Bernstein, Steve Swallow, Egbeeto Gismonti, Ralph Towner, Thelonious Monk, Lionel Hampton, and one smashing piece  – "Coffee Time" –  with improvised vocals, hand percussion (Taylor on the piano), and audience hand clapping.  Half the songs have lyrics by Ms. Winstone such as Swallow's "Ladies in Mercedes" and a pair by Towner ("The Glide" and "Celeste").

Two of the many pleasures of the recording is just how articulate the vocals are and how excellent the piano accompaniment is.  "The Glide" (first recorded in 1984 by Oregon) is a playful conversation with Ms. Winstone rising to the top of her range and Taylor dancing beneath.  The medley of "Round Midnight" (with lyrics by Bernie Hanighen) and "Midnight Sun" (music by Lionel Hampton, lyrics by Johnny Mercer) is bluesy, playful (especially the pianist's musical reactions to the lyrics), and includes a powerful piano solo in the second half. 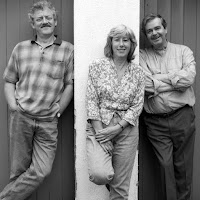 Other highlights include the lovely take on Gismonti's "Cafe" (first recorded in 1974 with Portuguese lyrics by the composer) – in the early moments of the track, you can hear intimations of Brazilian rhythms that break out later in the piece (after Taylor's wide-ranging solo).  The different tempos, the longing in the voice, the dancing piano, all mesh to make the performance a show-stopper.

The program concludes with Towner's "Celeste" (first recorded by the composer with Kenny Wheeler, pictured above with Ms. Winstone and Mr. Taylor). It's another ballad with an emotionally rich vocal; the way Ms. Winstone gives each word its own weight and importance is stunning, especially near the close of the song when the duo raises the intensity only to bring the piece to a close with a gentle line "....it's so good to be home."  And, you believe it.

Despite the fact that "In Concert" was recorded in 1988, this music and the performance is timeless. Norma Winstone (MBE) & John Taylor make these songs come alive, each piece a world unto itself yet part of the whole.  Take your time to savor this experience – it is well worth your time!

For more information, go to www.normawinstone.com.

Here's the opening track (music by Maestro Bernstein with lyrics by Betty Comden & Adolph Green, from "On The Town"): 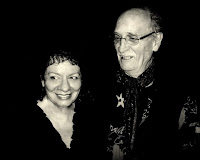 Vocalist Jay Clayton and percussionist Jerry Granelli first met in 1979 and began a musical relationship that has lasted ever since.  The drummer convinced her to move to Seattle, WA in 1982 to teach at Cornish College where the vocalist taught for two decades. They first recorded together in 1994 in a quartet setting with trombonist Julian Priester and bassist Gary Peacock followed in 2001 by two albums: one a quintet date for Sunnyside with saxophonist Gary Bartz, pianist George Cables, and bassist Anthony Cox and the other a duo date for Winter & Winter. 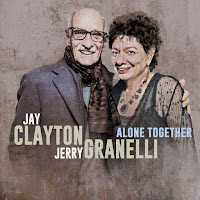 In 2014, Ms. Clayton ventured up to Halifax, Nova Scotia (where Mr. Granelli has lived since the early 1990s) – the duo entered Sonic Temple Studio and the results of their sonic adventures can be heard on "Alone Together" (Sunnyside Records).  The eight-song program ranges from dazzling improvised pieces like "Swing Thing" – that piece opens with the multi-layered voice pushing out a wordless vocal before the drummer steps in for his own solo statement – to a stunning take of Ornette Coleman's "Lonely Woman" (lyrics by Margo Guryan) to the opening and closing pieces set to poems by e.e. cummings.  Those two tracks, "Because It's Spring" and "Bells Too" (the words are the first four lines from "You shall above all things be glad..."

Each track has moments of magic. One hears two master musicians in conversation, enjoying each other's company, and exploring material that is is familiar or made up on-the-spot.  "Wild is The Wind" is a composition from Dimitri Tiomkin and Ned Washington from the movie of the same name and originally recorded for the soundtrack by Johnny Mathis.  Nina Simone also had a popular version of the song. Yet, the duo here do their own thing; Ms. Clayton embraces the melody while Mr. Granelli dances quietly beneath her voice.  And, it's lovely.  "New Morning Blues", composed by Ms. Clayton, dances forward on the strength of her layered vocals and the drummer's splendid brush work.  When the sticks take the place of the brushes, the piece takes on a serious groove.

"Alone Together" may not be very long – barely 39 minutes – but there's so much to absorb that you'll return time and again.  The program serves as a reminder of just how creative both Jay Clayton and Jerry Granelli can be.  It would be quite a treat to see and hear them in person inhabiting an intimate stage as their music caresses and plays with one's soul.

For more information, go to jayclayton.com (a site in need of updating) and to www.jerrygranelli.com.

Composer, vocalist, and pianist Lauren Lee, who hails from the St. Louis, MO-area, issued an album in October of 2019.  "Windowsill" (eyes&ears Records).  She has been playing with her Space Jazz Trio in venues around New York City since the early 2010s as well with The Velocity Duo – you can find recordings by both ensembles on Bandcamp.  "Windowsill" features her in a quartet setting with Brad Mulholland (alto saxophone, flute, clarinet), Andy O'Neill (drums), and Marcos Varela (acoustic bass).  All the pieces are composed and arranged by Ms. Lee; one hears a "working" band who really listen to each other and help the leader interpret the music in an organic fashion. Intelligent overdubbing adds voices and extra reeds yet this music does not sound over-produced. Make sure to pay attention to the lyrics. Ms. Lee is a "truth teller" and not a person who appreciates b.s. from anyone. 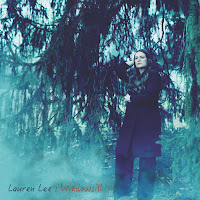 A piece such as "Get Off Me" blends a handsome melody with words that tell a person to go away and stop making the narrator feeling shame instead of love or contentment.  "So Long" is a love song, a celebration of finding a person who is open, sharing, one who listens, who allows the narrator to take her time and explore new and surprising feelings.  The music is buoyant, including a wonderful "scat" solo as well as melodic bass solo plus a fine alto spot.   Ms. Lee moves to Fender Rhodes for "Peaks and Valleys" (and Mulholland to flute) for a celebration of the light from the sun. The piece is a gentle waltz that moves easily atop the melodic bass and dancing brush work.  Nobody rushes through the music and the piece unwinds naturally.

There is an experimental quality to the opening of "She Who Journeys" replete with wordless vocals and a reed section of overdubbed clarinets and flutes that leads to an alto sax solo.  Ms. Lee's voice returns and she scats along with her piano solo as the rhythm section pushes her forward.  The leader is generous with giving the musicians the opportunity to solo; they reward her trust by giving their all each time they step out.  The rubato opening of "Tomorrow is Coming" features wordless vocals, flute phrases that sometimes sound like birds bobbing and weaving in the sky while the rhythm section rumbles and keens underneath. Those several minutes of musical wandering underscores the message that Ms. Lee delivers over a slow ballad – she tells the listener that no matter how bad your life is today, "time will take your worries away."  The song describes a situation that all of us go through many times in our life, doing so gently and without lecturing.

"Windowsill" is a fascinating journey, adult music that makes one sit up and listen.  As much as one would love it, we all have troubles and desires – Lauren Lee approaches life as the opportunity to learn every day, creating music that stands out for its honesty and sonic clarity.  Do check it out!

For more information, go to www.laurenleejazz.com.

Here's the afore-mentioned "Get Off Me":