New Ideas for The New Decade

Pianist and composer Theo Hill, a native of Albany NY, continues to mature with every gig and every recording.  A graduate of SUNY/ Purchase, he's been on the New York City scene for the past 16 years performed with numerous ensembles large and small. He's currently the pianist in the Mingus Big Band; thanks to his association with Posi-Tone Records, he has recorded with trombonist David Gibson, saxophonist Sam Dillon, and is a member of the sextet New Faces.  Hill has also recorded with trombonist Frank Lacy, trumpeter Josh Evans, and saxophonist T.K. Blue.  His 2014 recording debut as a leader was "Live at Smalls" featuring a quintet of saxophonists Dayna Stephens and Myron Walden plus bassist Joe Sanders and drummer Rodney Green. 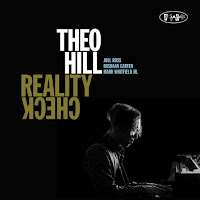 "Reality Check" is Hill's third recording for Posi-Tone.  Featuring an excellent trio of young musicians including Joel Ross (vibraphone), Rashaan Carter (acoustic and electric bass), and Mark Whitfield Jr. (drums).  The 10-song program contains seven originals plus one each each from David Berkman, Stevie Wonder, and Mulgrew Miller.  What one notices on initial listening is the energy level of this music and how well the participants listen to each other as well as interact.  Opening with Berkman's "Blue Poles" (from the pianist's 2000 album "Communication Theory"), the focus is on melody, rhythm, and getting to the heart of the performance. While the rhythm section pushes the vibes and piano forward, the music does not settle into a groove even as Ross charges forward. Before you realize, Carter locks in Ross while Hill feeds them chords and Whitfield Jr. plays with abandon.  It takes a few seconds to notice how the rhythm section drops into a rapid-fire swing for Hill's delightful solo. 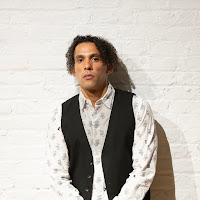 Besides acoustic piano, Hill plays Fender Rhodes as well as synthesizer on the album.  His creamy Rhodes sound atop the bubbling rhythm section on "Swell" is a delight while the string sounds produced by the synth on "Afrofuturism" does more than fill out the sound, helping to illustrate the title of the track (be sure to note Whitfield Jr.'s excellent drumming as well as Carter's fine bass accompaniment and counterpoint). After the delightful bass intro to "Aquanaut", the band kicks in to a hearty beat, not unlike pieces by McCoy Tyner (but a touch funkier).  The powerful forward motion of the piece has an urgent quality as do the solos by Hill and Ross.  The quartet's take on Mr. Wonder's "Superwoman" (more Rhodes and synths) is quite handsome – again, listen how the drummer "colors" the proceedings while the electric bass swims beneath the piano.

"Reality Check" also includes Mulgrew Miller's "Pressing The Issue"; the piece is a hard-hitting, high energy, track featuring fiery solos from Ross and Hill, one more track that brings McCoy Tyner to mind. The final tune, "Song of the Wind", is an attractive blend of Rhodes, synth, and vibes that gives the piece an ethereal feel.  Carter's bubbling base lines and Whitfield Jr.'s intelligent brushes leans towards a "fusion" feel yet the interactions are exciting while the solos are probing.  Theo Hill and company have created a soul-satisfying song experience, music with heart and soul as well as plenty of rhythmic fire.  Play it loud and often!

For the past decade+, bassist and composer Harish Raghavan has been the foundation of rhythm sections for artists such as Kurt Elling, Walter Smith III, Eric Harland, pianist Taylor Eigsti, and Ambrose Akinmusire (and others).  The native of Northbrook, IL (just north of Chicago) first studied drumming and took up the bass when he was 16.  He attended college at USC and studied with John Clayton and privately with Robert Hurst.  Upon moving to New York City in 2007, Raghavan started to work on a regular basis and continues to do to this day. 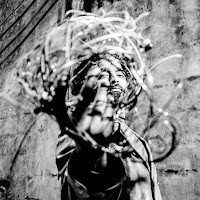 The bassist formed his first band in 2017 and wrote numerous compositions for a quintet.  He went into the studios in December of 2018 with Joel Ross (vibraphone), Micah Thomas (piano), Immanuel Wilkins (alto saxophone), and Kweku Sumbry (drums).  The results can be heard on "Calls For Action", the two-Lp/ one CD set issued in December of 2019 on Whirlwind Records.  While Raghavan is the leader and wrote all 15 of the pieces on the program, this is most certainly a group effort.  His interactions with drummer Sumbry (from Washington D.C.) are stimulating throughout – the bassist frees up up the young percussionist who pushes at the melody lines, interacts with the solos as the leader keeps the music moving forward (check out the lovely ballad "I'll Go and Come Back" for evidence of their work).

Ross and Thomas tease out the melody of "Los Angeles" as the bassist strums accompaniment as the drummer dances around his cymbals. Wilkins, a native of the fertile Philadelphia, PA. scene, gets to state that melody. The ballad moves slowly, in a stately fashion, even as Sumbry threatens to explode.  The lovely piano and vibes accompaniment set the tone for Wilkins's handsome solo.  The generous support from the rhythm section pushes the vibraphonist and pianist to create counterpoint while the saxophonist keeps his cool and helps to calm the rest of the band. It's a gorgeous piece. 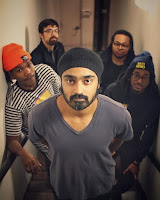 Then there are the pieces that tear the tops off one's speakers.  "Sangeet" starts quietly, alto sax and bass, stating the folk tune-like melod. As the quintet digs into the piece and Sumbry heats up, the group kicks into a higher gear and really begin a frantic dance.  "4560 Round Top" comes in on a rapid-fire circular melody presented by the front line while Raghavan and Sumbry play rhythms that have a South Indian feel. Listening to Ross dance above them is one of the many album highlights. Thomas and Sumbry combine to push the intensity even higher as the piece races to the finish line.  The drummer takes a long, passionate, solo at the opening of "Junior", setting the pace for a romp – the sax and vibes introduce the rhythmical melody line weaving in and around each other.  The thick bass lines and the skittering drums create a swirling storm never overwhelming those playing solos or melody lines.

It's amazing to read that Harish Raghavan and company created the 15-song, 70-minute, "Calls For Action" in one marathon session on December 15, 2018 – obviously, the group was ready. Such an impressive program, one that sounds great (you can really hear the deep notes of the leader's bass, especially on the three short solo pieces at the beginning, middle, and end of the album); the music also makes one wish to hear this youthful ensemble (all but the 37 year-old bassist are in their mid-20s) in person.  Kudos to engineers Joe Blaney (studio), Andy Taub (mix), and Dave Darlington (master) plus producer Walter Smith III for jobs well done.  Harish Raghavan may have been quite patient in waiting to record as a leader but the wait was well worth it.

For more information, go to harishraghavan.com.

Saxophonist and composer Luke Norris, a native of Long Island, recently completed his studies at the Eastman School of Music in Rochester, NY.  His first two EPs, both issued on Bandcamp, posit him as singer-songwriter playing guitar, drum machines, keyboards, and doing all the vocals.  Meeting guitarist Mike Baggetta as a summer music camp pushed Norris in a new direction and he began writing pieces that combine an acoustic trio (saxophone, bass, and drums) with electric guitar.  Baggetta'a use of looping and other electronic programs for guitar created a sound in the saxophonist's mind that is now realized on "Northernsong" (Ears&Eyes Records). 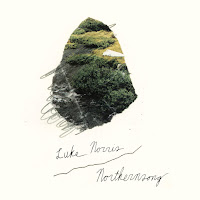 With the rhythm section of Tyrone Allen (bass) and Daniel Sunshine (drums) plus the guitarist's inventive playing pushes the eight-song program in often mesmerizing territories.  From the opening notes of the opening track, "Sketches in C", one hears music that takes Norris's interest in folk music and makes it move in unexpected ways.  The song has a long, handsome, melody played by tenor sax and guitar, while the bass and drums move freely underneath. Baggetta's shimmering guitar tones give the piece an ethereal feel, especially the quiet looped drone in the background. On the closing track, "Things Ending Begin Again",  the "nervous" drone beneath the lovely melody Norris writes for soprano sax and guitar is somewhat off-putting. Yet, the interaction of the quartet creates a melodic portrait that resonates long after the guitar sounds take the piece out.

The guitarist and rhythm section give Norris a comfortable cushion to go for a fascinating soprano sax adventure on "Bruising Stones."  Allen and Sunshine lock in with Baggetta and really push the piece forward.  When the guitarist creates his solo, the tempo becomes understated but picks up intensity as he creates his handsome solo. "Strong Heritage" is more raucous, Baggetta going for a harder tone yet when the leader (on tenor) starts his solo, the guitarist drops out for a moment, returning to underpin the solo with fiery chording. Baggetta then roars through his solo, Sunshine sounding on the drums as Allen unites with Norris to keep the song on its foundations. 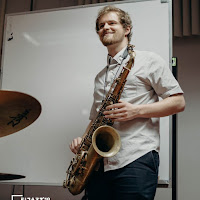 Dig the rocking opening of "Excavate", the guitar and drums connecting once more to create a wall-of-sound.  The contrast with Norris's melodic tenor creates a tension that rarely lets up. The saxophonist leaps into the fray as the piece careers forward, as the rampaging drums and insistent guitar lines urge him on.  Yet. Norris and Allen return to the melody to bring the piece to a place where Baggetta's unaccompanied electric guitar can wind the music down.

"Northernsong" may frustrate some listeners who want their musical experience easily put into a genre or style. The addition of guitarist Mike Baggetta gives the music a more dynamic and wider range of sounds. The more Luke Norris can perform this music and begin to comprehend its myriad possibilities, the more roads he can explore in the future. With this release, he's definitely on his way.

For more information, go to www.lukenorrismusic.com.