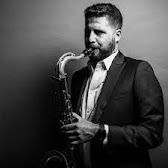 While visiting family in Chicago last month (6/21), I took the opportunity to meet (on separate occasions) with musicians Sam Pilnick (pictured left) and Shawn Maxwell.  Both are saxophonists and composers with Pilnick just beginning his career and Maxwell twenty+ years into his (my next post will feature his two new releases).  The younger musician teaches middle-school Band in a Chicago suburb and has been performing with various ensembles since moving to the city four years ago. One of those groups is the Sam Pilnick Nonet Project featuring himself on tenor saxophone and eight of his close musical friends. He composes pieces that play to each member's strength and his debut recording is a fine example of that 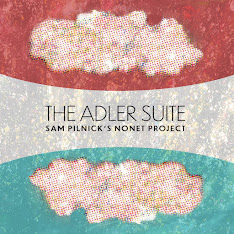 "The Adler Suite" (Outside In Music) started its life when the composer served as a chaperone on a school trip to the Adler Planetarium in Chicago.  Not only was Pilnick impressed by the architecture (see photo below) but was fascinated by the many displays that spoke of man's quest to discover what's beyond the sky. Each time he returned to the Planetarium, Pilnick would take notes and begin composing themes about different aspects of exploration.  The first three solo trumpet notes of the opening track, "Squawk Box", leads one to believe that the piece is a rewrite of Richard Strauss's "Also Sprach Zarathustra"; the piece soon moves into a harmonic adventure that invites in the nonet.  The composer-arranger uses variations on those three notes throughout the first several minutes before a short bowed bass solo opens the music up to the reeds, brass, and piano creating musical universe. Pianist Meghan Stahl creates an introspective solo that is fllwed by an excellent bass clarinet solo from Ted Hogarth. In case you wondered, the title of the piece comes from the apparatus NASA would place in an astronaut's home so the family could hear the communications between those in outer space and Mission Control.
The Nonet then jumps into "Star Launch", a bebop-inspired romp that features a saxophone conversation between Max Bessesen (alto) and the leader's tenor.  The interaction of two stars revolving around each other until they merge is the basis of "Revolving Twins" – you'll hear how the sections move around each other, how the rhythm section push them together and pull apart. "House of the Massives (Pismis-24)" rocks from the opening notes and is based on a photograph of a star system and the amazing colors one sees. The music also reflects the composer's love of rock music yet listen to how he moves the reeds and brass around each other. Powerful solos from Bessesen, guitarist Ben Cruz, and the leader give even more urgency to the music.

The album closes with "Expanding Universe" which feeds into "Falling Backwards".  The first track has no set tempo but moves forward on the rich section work with Bessesen's alto leading the way.  The intensity builds (thanks to drummer Matthew Smalligan) until it is broken by the eerie guitar scratches, bowed bass, and Pilnick's tenor playing the melody line until silence; then, the piano, bass, and drums set a driving rhythm for the latter piece which is based on the space capsule's reentry into Earth's atmosphere and gravity.  The tenor solo over a changing rhythmic landscape highlights the various emotions one must feel coming home. Trombonist Euan Edmonds strong solo statement over the horns and thunderous rhythm section echoes the final, fiery, descent before the parachutes open and the capsule splashes into the ocean.
"The Adler Suite" is a delight-filled debut from Sam Pilnick.  This labor of love is highly personal yet resonates with those who dream of seeing stars, traveling to other planets, and exploring the vast universe. The Nonet plays with verve and emotion, sharing the composer's Planetarium dreams.  Listen with open ears and open mind; you'll find this journey quite exciting!
For more information, go to www.sampilnick.com.   To purchase the album, go to https://sampilnick.bandcamp.com/album/the-adler-suite.
Personnel:
Sam Pilnick – tenor saxophone, compositions
Max Bessesen – alto saxophone
Ted Hogarth – baritone saxophone, bass clarinet
Emily Kuhn – trumpet
Euan Edmonds – trombone
Ben Cruz – guitar
Meghan Stagl – piano
Ben Dillinger – bass
Matthew Smalligan – drums
Hear "Revolving Twins":
Nine years have passed since I last heard the music of pianist Ari Erev.  Born, raised, and still living in Israel, he's been studying and playing jazz since the age of 17. He's worked alongside many Israeli musicians including bassist Tal Ronen, percussionist Gilad Dobrecky, and vocalist Ayelet Rose Gottlieb (now living in Canada).  He's also recorded with saxophonists Joel Frahm and Yuval Cohen (brother of Anat and trumpeter Avishai). In addition to his Trio work, his Nocturno quartet explores the music of Central and South America as well as Cuba.  Erev has recorded five albums as a leader, the latest being "Close to Home" (self-released). 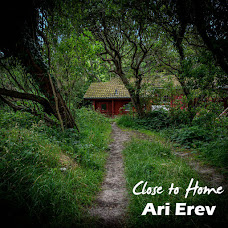 Instead of celebrating exploring outer space or new worlds on this planet, composer' pianist writes about the places and people he loves, about his community, celebrating life in the midst of continuous strife.  Joining Erev is bassist Assaf Hakimi and drummer Gasper Bertoncelj plus guests Yuval Cohen (soprano sax on five tracks), Hadar Noiberg (flute on two tracks), and Gilad Dobrecky (percussion on eight tracks). The 73+ minute program features nine originals plus one piece each by Keith Jarrett, Antonio Carlos Jobim, Israeli rock star Efraim Shamir, Brazilian composer/ conductor Debora Gurgel, and Paul Simon.  The album opens with the leader's "Israeli Story", an uptempo samba featuring Ms. Noiberg's lyrical flute work. Dobrecky and Bertoncelj combine with the bassist to create a bouncy rhythm for the soloists to play upon.  There is a similar feel to the following track "Playground" although this time it's Cohen's delightful soprano sax leading the way.
Ms. Gurgel's "Para Sempre (Forever)" also utilizes a samba on which the composer places a fine melody. Erev leads the way with a heartfelt reading of the main melody. The pianist builds his solo off the melody lines moving back and forth like watching a leaf dancing in the wind. Shamir's "Shi'ur Moledet (Homeland Class)" opens with a classically-inspired melody played only by piano and bass (excellent counterpoint) until Dobrecky joins 1/3rd of the way into the piece.  Listen closely to the interaction between bass and piano as it supplies the forward motion. Ms. Hoiberg and Cohen combine to present the melody on Erev's "Afar (for Tal)" but the first solo goes to bassist full-toned acoustic bass.  Then the flute and soprano improvise together, wrapping the lines around each other and occasionally moving back to the melody until the leader steps out for a finely-constructed solo. 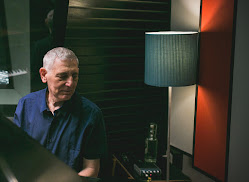 The last three tracks begin with A C Jobim's "Olha Maria", a lovely ballad on which the pianist caresses the circular melody with just bass and percussion in support.  Following that is Simon's "Still Crazy After All These Years" – the drums and percussion percolate below the piano playing the melody as the bass dances in company with Erev's left hand.  The pianist, as is his style, stays close to the melody throughout his solo. He captures the bluesy quality of the original. Hakimi switches to electric bass for the final track, Erev's "Po (Here)", while Cohen's soprano is featured on the melody. He's in the higher register throughout the tune; there's a delightful piano solo that leads back to Cohen whose solo stays close to the melody. The sax and piano tease each other as the rhythm section guide them to a gentle finish.
"Close To Home" is the most personal of the albums Ari Erev has released. The leader, the rhythm section, and the guests all have reverence for melody and Brazilian rhythms so the music rarely gets noisy. Many of the songs wrap around the listener like a comfortable blanket, a hug that serves as a balm in troubled times.  Some make you want to dance.  All of them sound really good!
For more information, go to https://arierev.com/.  To hear more music and purchase the album, go to https://arierev.bandcamp.com/album/close-to-home.
Hear "Falling In Place" (with Yuval Cohen):
Posted by Richard B. Kamins at 9:30 PM