Pianist and composer Art Hirahara is a deft pianist, technically and emotionally strong, an excellent composer, and can traverse genres with ease and wit.  Since moving to NewYork City in the early 2000s, the pianist has worked alongside vocalists Rosanna Vitro, Stacey Kent, and Freddie Cole, with the late saxophonist/conceptualist Fred Ho as well as drummer royal hartigan, and violinist Jenny Scheinman (among many).  Over the course of five albums for Posi-Tone Records, Hirahara has audibly demonstrated his growth as a composer, telling stories through his melodies and use of rhythmic movement. 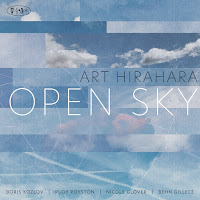 His sixth album for Posi-Tone, "Open Sky", features the dynamic rhythm section of bassist Boris Kozlov and drummer Rudy Royston plus contributions saxophonist (tenor and soprano) Nicole Glover and vibraphonist Behn Gilecce.  The title track features Gilecce and sounds influenced by Charles Lloyd's "Forest Flower" and the percussive stylings of McCoy Tyner.  The four musicians move as one, spurred on by the leader's rhapsodic and bell-like piano sound.  Ms. Glover's tenor sax takes the lead on "Mia Bella", a lovely ballad, her tender phrases moving in and around the fine piano accompaniment.  She returns on soprano for the Latin-esque "Weathered the Storm" –– the track dances forward on the delightful drumming (listen to how Royston pushes the piano to really "groove"). 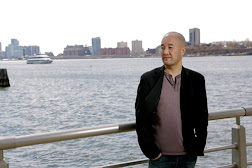 The bassist contributes "Não Tão Azul"; based on the changes to A.C. Jobim's "Triste", the melody feels Brazilian even as the rhythm section move in and out of a Tropicalia feel.  Quite funky, thanks to Royston's sweet barrage.  The drummer's contribution, the ballad "Sunday Morning", has a touch of Gospel, a tinge of Philly Soul, and impressive communication between the musicians.  Kozlov blends melodic lines and deep notes underneath the melody until his handsome solo –– he has such a splendid tone!
While the leader did pen nine of the 13 tracks on the disk, one should make note of the two "standards".  "I'm Getting Sentimental Over You" gets a jaunty uptempo reading that hints at Earl "Fatha" Hines and Art Tatum. "Empathy", from the pen of Duke Pearson, jumps from the opening chordal construction that Hirahara returns to throughout the piece.  The interaction of the trio is such a delight with the rhythm section responding to growing intensity of the piano solo. The other solo piece on the program, "Peony", is a Hirahara composition yet sounds might have been composed by Duke Ellington.
The sky's the limit with "Open Sky", yet one more exemplary display of the talent of Art Hirahara.  His songs surround the listener, leading he/she in for an hour of delightful songs, fine musicianship, and, like the title, a sound that makes one to sit outdoors and let the breeze brush your shoulders as the music moves forward.
For more information, go to http://arthirahara.com/.  To hear more and to purchase the music, go to https://arthirahara.bandcamp.com/album/open-sky.
Here's the opening track, inspired by the protests in the wake of the killing of George Floyd, "Groundswell":
I must admit to not hearing any of the albums of the group Slowly Rolling Camera before the trio's new recording "Where the Street Leads" (Edition Records) arrived.  The brainchild of Dave Stapleton (Fender Rhodes, piano, Moog), Deri Roberts (electronics), and Elliot Bennett (drums), the music obliterates genres on each song.  There are dance beats, swirling string sections, and excellent contributions from guests Mark Lockheart (soprano and tenor saxophones), Stuart McCallum (guitar), Jasper Høiby (double bass), Verneri Pojhola (trumpet), Chris Potter (tenor saxophone), and a stunning performance from vocalist Sachal Vasandani. 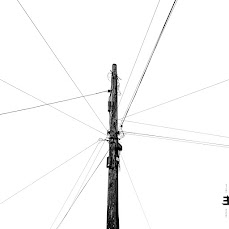 "You Are the Truth" opens the eight-song program with the melody first played by Stapleton then shared by the strings. Bennett really pushes the song forward, with his insistent "trip-hop" drums.  When Stapleton steps out with a distorted Fender Rhodes reiteration of the melody, it might remind some of the Soft Machine's Mike Ratledge's Fender work.  As you listen to the following tune, the title track, you realize the the pianist composes the material with short melodic phrases repeated throughout each piece until the soloists step forward. On "Where the Street Leads", McCallum goes first and steps aside for Lockheart's soprano solo which hearkens back to the work that Wayne Shorter did with Weather Report.  The solos move easily over the swirling background. 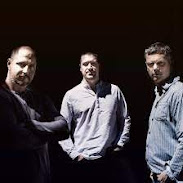 Adding the voice of vocalist Vasandani is a stroke of genius.  The medium-tempo ballad "Illuminate" puts his voice in the midst of the keyboards and Bennett's active drums.  In the last 90 seconds, McCallum steps out with an emotional solo with the addition of the vocalists repeating "Who are you...who are you...can you do this?" over the middle of the guitar phrases.
Chris Potter is featured on "Feels Like Fiction", joining the song two minutes with a strong tenor spotlight. McCallum also solos with the strings shimmering all around him (Stapleton's string arrangements for the eight-member ensemble are often dazzling and alway supportive). Lockheart steps out on soprano for a short statement before the Morse-code like keyboard notes bring the piece to a close.
"Where the Streets Lead" closes with "A Force for Good" with Verneri Pojhola's breathy trumpet lines supported by the circular keyboard phrases and the rising lines of the strings that then begin to soar as Lockheart's soprano swoops and dives around them.  The piece closes with gentle piano lines under the the trumpet which soon fades as the music slowly comes to its end.
Slowly Rolling Camera makes music that is too powerful to be called New Age, too funky to be Jazz, too jazzy to be Funk, and too acoustic to be called Electronica –– So, what is it?  Who cares what you call it.  Just sit and let the sounds flow over you, get lost in the repetitive keyboard phrases, move your feet to the often-dancing drums. And enjoy!
For more information, to hear more, and to purchase the recording, go to  https://slowlyrollingcamera.bandcamp.com/album/where-the-streets-lead.
Here's the title track:
Posted by Richard B. Kamins at 10:48 PM