Earlier this year, AUM Fidelity released "Migrations of Silence Into and Out of the Tone World", a massive yet splendid 10-album set of original music composed and arranged by bassist-composer William Parker.  10 separate groups, 91 tracks, 594 minutes of music, which takes down to ingest, ruminate upon, and understand.  Like the recent works of Wadada Leo Smith and Anthony Braxton (also multiple disk sets), Mr. Parker's music is telling stories, narratives that blend tradition, history, and are very much a reflection of the present day. In the weeks leading to the Pandemic shutdown, the bassist recorded two albums that continue the exploration that his earlier albums began. 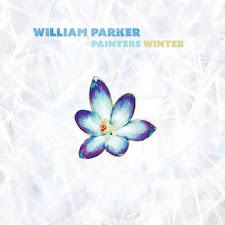 Both new releases are trio dates. "Painter's Winter" features the leader on bass, trombonium, and shakuhachi, Daniel Carter (trumpet, alto sax, tenor sax, clarinet, and flute) and Hamid Drake (drums).  The program opens with the hard-driving "Groove 77" led by Mr. Parker's thick bass lines, Drake's funky yet creative drumming, and Carter's muted trumpet lines.  The rhythm section, mixed up high, is in sharp contrast to the thoughtful trumpet throughout.  The title tracks opens with Mr. Parker on trombonium (a smaller, curved, trombone), Carter's flowing flute, and Drake's spare yet conversational drums.  The intensity of the flute and brass interaction picks up and the music begins to bounce as the drummer gets into conversation.  The listener can sit back and revel in the deep sounds.

Carter's smooth-toned alto leads the way on "Happiness" with the bassist, at times, playing counterpoint and Drake right/ tight in the groove. The music slows down for a frantic arco bass solo but afterwards picks up in speed. The introspective is in stark contrast to Drake's dance around the drum set and Mr. Parker's occasional walking bass line.  "Painted Scarf" pairs clarinet and shakahuchi with, at the onset, very quiet or little percussion. Over the 10:49, Drake pushes his bandmates by creating a Native American rhythm which ratchets up the intensity.  "A Curley Russell" closes the program; Mr. Parker dedicates the piece to the late "Curley" Russell, the "be-bop era" bassist who played with Tadd Dameron, Charlie Parker, Art Blakey, and Bud Powell (among others).  Carter's lively alto sax leads the way with the bassist's thick tones helping to fill the bottom.  Drake creates a rollicking drum solo which lights a fire under the saxophonist who then creates his most impassioned solo on the disk. After the delightful bass solo, the trio takes the song out in a spirited fashion.
"Painter's Winter" is an album to savor, to sit back and let the sound wash over you time and again.  William Parker, Daniel Carter, and Hamid Drake have history, as they say, know each other well, and sound as if they are having a great time –– you will as well!
For more information, go to www.williamparker.net.  To purchase the album, go to
https://williamparker.bandcamp.com/album/painters-winter.
This is "Painter's Winter": 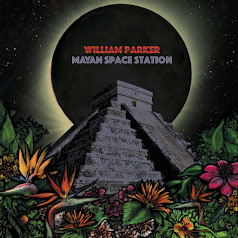 "Mayan Space Station" posits Mr. Parker in the studio with guitarist Ava Mendoza and drummer Gerald Cleaver.  With Ms. Mendoza's highly amplified sound, one could easily call this group a "power trio".  Mr. Parker's locks in with the drummer and this music often has an irrepressible groove.  It's hard to sit still listening to "Domingo"; notice how the guitarist creates a sound and attack not unlike that of Nels Cline but one also hears traces of Tom Verlaine (Television) and blues great Michael Bloomfield (when he played with the Paul Butterfield Blues Band on "East-West"). Mr. Parker's infectious groove jumpstarts "Rocas Rojas" with Cleaver diving right in, moving about his drum kit in glee, Ms. Mendoza wailing and shredding above.  The title track opens in the spirited fashion of Arthur Blythe's "Down San Diego Way" with Cleaver's drums (he's using brushes, no less) and percussion paired with Mr. Parker's solid four-note bass runs. Ms. Mendoza jumps in, roaring in musical approval until the 4 minute mark, slows down for a moment, and picks up her sonic attack. The guitarist steps out of the spotlight halfway through the 14:42 track to make way for the raucous bowed bass solo over Cleaver's crashing cymbals and snappy snare.

"Canyons of Light" is a rubato piece with tremendous cymbal and cowbell work, shimmering/ furious arco bass, and long tones and moans from the guitar. As Ms. Mendoza goes into "attack mode", the rhythm section continue to thrash around beneath. There is a hint of a steady rhythm as the piece fades down at the 10-minute mark.  It's a challenging piece of music that stands out for its aural expressions and passionate musicianship.
The album closes with "The Wall Tumbles Down", another hard-edged piece with a irresistible groove. Ms. Mendoza's chordal romp over a guitar drone gives way to a solo that builds up from a simple riff into a bluesy wailing spotlight.  One can hear the influence of Vernon Reid and Sonny Sharrock especially later in the piece when she loops police sirens. The loops don't disappear until the last minute of the piece. Perhaps, these are the walls of racism, sexism,, and intolerance: nevertheless, it's a powerful finish to an album of powerful moods and sounds.
"Mayan Space Station" is music that demands to be played loud, windows open to the world. William Parker wants to touch the world, wants to help people get out of the doldrums and away from the fears that come blasting out of our televisions, radios, and "smart" phones.  Kudos to Ava Mendoza and Gerald Cleaver for their contributions to this most appealing recording.
To purchase the album and see more of William Parker's catalogue on AUM Fidelity, go to https://williamparker.bandcamp.com/album/mayan-space-station.
Hear the opening track, "Tabasco":
Posted by Richard B. Kamins at 5:15 PM