Reed master, composer, arranger, conceptualist, and interpreter Anthony Braxton is soft-spoken, gentle, and delightfully scholarly. However, when he composes new works or interprets "standards", he is fearless. Mr. Braxton has two new major projects that have just been released; the first is a 12-disk set of original pieces composed for sextet, septet, and nonet using his ZIM Musical System, the other a 13-CD set of standards recorded on a European tour in early 2020 utilizing a trio based in Great Britain.

Honestly, the best way to understand the original music of Anthony Braxton is to read his liner notes.  At times, they seem fantastical but his words do explain how his music is composed and how it can be played.  "12 Comp (ZIM) 2017" (Firehouse 12 Records) features 12 album length compositions recorded in four different venues  ranging from Wake Forest University (North Carolina) to Firehouse 12 Studios (New Haven, CT) to Montreal, Quebec, to Café Oto (London, England). ZIM music is based in "Gradient Logics" including "it gets faster or slower", "Friendships in time", "A Change of Goals" as well as a "Five Part Decision Construct...Unique to ZIM Territories."  Needless to say, there is a lot going on yet this music rarely feels cluttered (unless it's supposed to).  And the music is played by musicians who have either studied with Mr. Braxton or have played his music often. Also, like all music, it's about relationships of musicians with each other, of instruments responding to and supporting each other. In the final analysis, do you need to understand what the author is saying to enjoy the experience?  Mr. Braxton's music has always counted on the listener who is willing to dive in, to reject pre-conceptions, and to make up his or her mind.  It is easy to walk away shaking your head. The song titles (see the cover photo below) don't help, don't tell you what to think, and that's a good thing. 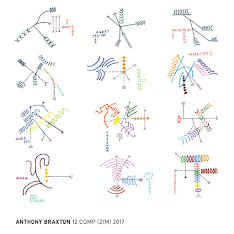 Note there are no drums, there is no percussion, no piano or string bass in the personnel (listed below). Dan Peck's tuba and Tomeka Reid's cello rarely create a foundation; instead they are both part of the conversation.  No matter the size of the ensemble, the instruments come in and go out of the sound spectrum. Besides Peck and Ms. Reid, Adam Matlock's accordion really adds a fascinating voice to the mix.  Taylor Ho Bynum's sound is quite recognizable especially when he steps out front. The addition of two harpists creates different and lighter shades throughout but also provide a percussive feel to several pieces.
Mr. Braxton plays numerous reeds throughout as both a member of the ensemble and a lead voice which is voice is prominently featured on each disk; but, so is Matlock's, Bynum's, Peck's, and others. Those familiar with the music Anthony Braxton creates know to expect the unexpected –– those unfamiliar with the majority of his work, do not expect a "jazz" album.  Just listen and make up your own mind.
To hear the music and to purchase the set, go to https://firehouse12records.com/album/12-comp-zim-2017.
Personnel:
Anthony Braxton - reeds, compositionsTaylor Ho Bynum - brassDan Peck - tubaJacquline Kerrod - harpShelley Burgon - harp (on "Compositions 402, 412, 408-410")Tomeka Reid - cello (on "Compositions 402, 408-410, 413-416")Adam Matlock - accordion, aerophones (all tracks except "Composition 402")Jean Cook - violin ("Compositions 418-420") Stephanie Richards - trumpet ("Compositions 418-420")Ingrid Laubrock - saxophones ("Compositions 418-420")Brandee Younger - harp ("Compositions 413-416")Miriam Overlach - harp ("Compositions 418-420")
Look and listen to "Composition 409":

Mr. Braxton has always a tender spot for "standards" and he has recorded a number of albums, usually in a quartet format to display that affection.  Between January 15 and 25/2020, the latest Standards Quartet did a quick tour of the European Continent playing in Warsaw, Poland, Wels, Austria, and London, England.  Mr. Braxton limited his reed arsenal to sopranino, soprano, and alto saxophones, sharing the stage with three British musicians including pianist Alexander Hawkins, bassist Neil Charles, and drummer Stephen Davis. Each date was recorded; New Braxton House Records has just issued "Quartet (Standards) 2020", a 13-CD set featuring 67 performances and no tune repeated! This batch of songs includes pieces from John Coltrane, Charles Mingus, Cole Porter, Burt Bacharach, Paul Desmond, Dave Brubeck, Andrew Hill, and others as well as the theme songs from the movie "High Noon" and television's "The Carol Burnett Show", plus four songs from Paul Simon. 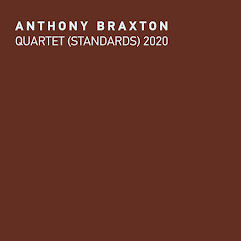 Yes, that Paul Simon.  Mr. Braxton and Mr. Hawkins interpret "Old Friends" as an alto sax - piano duo.  While the saxophonist captures the pathos in the melody, the pianist waxes rhapsodic and the disparity in approaches works nicely. There's a fairly straight-ahead reading of "59th Street Bridge Song (Feelin' Groovy)"; as hard as Hawkins tried to push Braxton a bit further out, the leader stays mostly in a lyrical vein.  If you know the tune, you won't be turned away by this rendition. The alto saxophonist displays his blues chops on "Still Crazy After All These Years".  The Quartet go a bit "free", a lot gospel, and kick it into higher gear a la a Prayer Meeting.  Hawkins' frenetic piano solo changes the mood and mode on "Bridge Over Troubles Water" yet Mr. Braxton makes certain that the soulful melody is heard at the opening and the close.
Over the course of the 67-song program, there are many highlights and I do not want to spoil the delight of any listener hearing this music for the first time.  Among my favorites?  Duke Ellington's "Prelude To A Kiss" is both melodic and adventurous with strong solos from the leader (on alto) and Hawkins but also pay attention to the delightful bass counterpoint and the dancing drums.  If you need a chuckle, the opening of "Who's Afraid of the Big, Bad, Wolf" has a child-like sopranino melody that leads to a humorous give-and-take with all four musicians stopping and starting (as if they were playing hide-and-seek.  The ensemble's take on Paul Desmond's "Take Ten" moves away from the "cool" take the composer recorded in 1963 and gives it a John Coltrane Quartet feel with driving piano chords and a thunderous rhythm section. Thelonious Monk's "Off Minor" is also fun and adventurous as is "Pannonica" especially when Mr. Braxton's soprano sax joins bassist Charles in the opening moments.
Given the live recording milieu (although one never hears an audience response),  it's not surprising there are moments that do not hang together but those are few and far between.  Overall, "Quartet (Standards) 2020" will give you many hours of listening enjoyment. Neil Charles and Stephen Davis are excellent throughout, Alexander Hawkins displays how he is an exciting, inventive, and supportive pianist, and the 74-year old Anthony Braxton sounds as if he is having such a great time.  Yes, 13 CDs is a lot but you do not have to listen to all 67 cuts, all 11 1/2+ hours, in one sitting. Unless, of course, you're that kind of Anthony Braxton fan.  This is a great package to set on "random play" and see what comes up.  It's captivating to hear Mr. Braxton play "in the tradition" especially as he has been instrumental (no pun intended) in expanding the universe of Creative Music.  Go ahead, dive in!
Personnel:
Anthony Braxton - saxophonesAlexander Hawkins - pianoNeil Charles - bassStephen Davis - drums
To hear more and purchase the set, go to https://newbraxtonhouse.bandcamp.com/album/quartet-standards-2020. To find out more about the amazing world of Mr. Braxton and the work of the Tri-Centric Foundation, go to https://tricentricfoundation.org/anthony-braxton-bio.
Hear "Out of Nowhere":
Posted by Richard B. Kamins at 9:51 PM