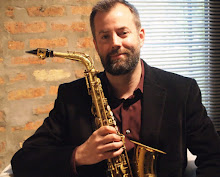 On our recent trip to Chicago, I had the opportunities to interview saxophonists/ composers Sam Pilnick (posted here) and Shawn Maxwell (pictured left). Up until the days before we had lunch and chatted over a leisurely two hours, I did not know much about Mr. Maxwell or his music.  I have a friend who has played his music on the radio but I had not listened to an entire album.  Before we left home, "Expectation & Experience" (CoraStreet Records/ Jazzline) arrived in my in-box.  Our conversation began with a discussion of creating an album during lockdown, especially an album that spoke to the health of a nation and of the artists whose music chronicles everyday life. 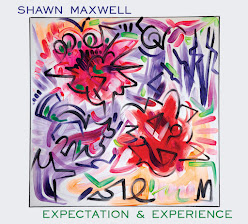 17 songs, none longer than 4:18 with five below two minutes and four under three, each with a different lineup –– "Breathe" pairs Maxwell (alto sax) with pianist Brenda Earle Stokes and was inspired by the footage of George Floyd's murder while the following track, "A Change of Climate", finds the leader on soprano sax with Paul Abella on cajon and tambourine. The lockdown gave the saxophonist ample time to reflect on the world and help amplify the belief that a musician's role in society is not just to entertain but to inform, to help illuminate the road to change.  "No Peace Without Justice" blends the wordless vocals of Keri Johnsrud and John Stafford with soprano sax and the acoustic guitar of Craig Elliot; the tune and the spirit of the music was inspired by the Black Lives Matter protests of 2020.

There are several songs relating to the loss of work for musicians. "The Show Can't Go On" features Maxwell conversing on alto sax (left and right channels) propelled forward by the drums of Ernie Adams while the following track "Empty Stage" is a short but powerful alto sax solo sans accompaniment.
The composer also wrote a pair of tributes to friends: "J.C. Jones" celebrates the life of a person who meant a lot to Maxwell over the years while "Quiet House" is a ballad honoring the memory of Evon House Thompson, a gospel-singing friend of the saxophonist. The latter tune has a "virtual strings" arrangement by guitarist Zvonmir Tot.

Every musician on "Expectation & Experience" (the album takes its name from the first and last tracks) was recorded alone at home or in a studio.  Yet, the music does not sound disjointed –– instead, this group of musical haikus allows Shawn Maxwell to air his political and personal views while entertaining the listeners. Many of the albums released in the past few months were recorded either before or during the pandemic: pay attention to the ones in the latter category (like this one) and you'll hear musicians working and playing through the issues of the day.
For more information, go to www.shawnmaxwell.com.  To hear more and to purchase the album, go to https://shawnmaxwell.bandcamp.com/.
Here's "J.C. Jones": 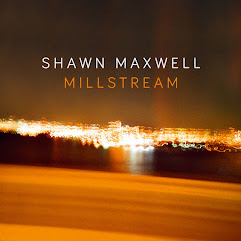 While you are on Mr. Maxwell's Bandcamp page, you'll see "Millstream", an album with his band recorded before the pandemic and scheduled to be his debut release for Jazzline.  Maxwell plays alto and soprano saxophones with Collin Clauson (Rhodes, acoustic piano, Wurlitzer), Jeremiah Hunt (bass), and Phil Beale (drums) plus, on two cuts, Chad McCullough (trumpet, flugelhorn).  While the pandemic album was often an acoustic project, Clauson's keys and the dancing drums gives this music more of a "fusion" feel. Several tunes are quite funky such as the hard-hitting "Squared Circle" and "Sold Separately".  McCullough's trumpet blends nicely with Maxwell's soprano sax on the smartly played "Front Walk Over"" note how the two musicians come together and then go int a call-and-response before soloing simultaneously.
Go to Shawn Maxwell's Bandcamp page, give a listen, and make up your own mind. What stands out for this listener is the witty melodies and fine musicianship.
I'd also like to thank Shawn Maxwell for taking the time to sit and talk to me –– we had never met but he was generous with his time and information and I look forward to catching up with his again the next time we're visiting.
Here's the Quartet in action on "Ravage Eject" with the album's bassist Hunt replaced by Michael Barton –– the performance was recorded just a few days before the world went into lockdown:
Posted by Richard B. Kamins at 4:54 PM