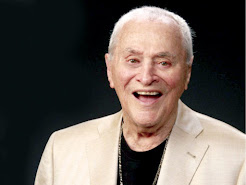 Julius Gubenko (pictured left) was born in Brooklyn, NY, on October 13, 1924 and grew up to be Terry Gibbs, vibraphonist, composer, and bandleader.  Doing gigs into his early 90s, he had played with Sarah Vaughan, was Steve Allen's musical director on television and in clubs for 17, and had played, as a young drummer, with the great Klezmer clarinetist Naftule Brandwein. The young Gubenko came by his career naturally as his father was a bandleader in the Catskills. Perhaps his biggest thrill was playing with Benny Goodman.  In the mid-1950s. he moved to Los Angeles, CA, where another world of opportunities opened for him (such as studio work) but his pride and joy was his Dream Band (a big band) and the dozens of small groups he worked with over the decades. 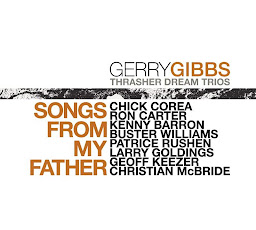 Terry begat Gerry.  The younger Gibbs, a drummer and composer, was born in 1964 and has been a professional musician since the early 1980s, working with a plethora of artists from Alice Coltrane, Harold Land, Billy Childs, and Parliament Funkadelic (among many others).  As a leader, Gerry Gibbs has lead the Thrasher Trio, a sextet, a big band, and an orchestra.  As a leader or co-leader he's issued 13 albums but, up until now, he's never dedicated an album to his father.  "Songs From My Father" (Whaling City Sound) is just that –– it's a 19-song, two-CD set, that features drummer Gibbs with four sets of partners (his Thrasher Dream Trios) plus his percussionist wife Kyeshie Gibbs. 18 of the songs are Terry Gibbs originals with the final track, "Tango for Terry", composed and performed by Chick Corea in what probably was his final time in the studio before his untimely passing in February of this year.

The program opens with "Kick Those Feet" featuring pianist Kenny Barron and bassist Buster Williams.  Those two great musicians also appear on "Take It From Me", "T & S", "Lonely Dreams" and on "Hey Chick" (more about that track below).  The album also features Gibbs with pianist Patrice Rushen and organist Larry Goldings on the funky "Smoke 'Em Up", the Latin-flavored and fiery "Townhouse 3", the bluesy romp "Hippie Twist" and on the lovely ballads "Lonely Days" and "Pretty Blue Eyes".  Pianist Geoff Keezer and bassist Christian McBride join the drummer for the rollicking "Nutty Notes", the bluesy "The Fat Man" (not the song by Fats Domino), the bouncy "For Keeps", and the witty "Gibberish". 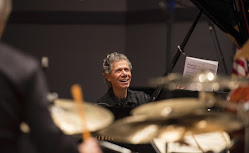 Piano Master Corea not only plays with Gibbs and bassist Ron Carter on his afore-mentioned "Tango for Terry" but also on the charming "Bopstacle Course",  the sensual "Sweet Young Song of Love", and the handsome "Waltz for My Children".  It's really fun to hear the bassist's intelligent choice of phrases and counterpoint complementing the pianist.  Meanwhile, the drummer dances, colors, and swings in support.
The most fascinating track, "Hey Chick", closes CD One, and is a wonder of technology.  Recorded after Mr. Corea's death, Gibbs took his Dad's tune, "Hey Jim", changed the title with his Father's permission, and all the musicians on the album (except Corea) appear. The opening solo is actually Father Gibbs' vibes solo from the original 1961 recording over the quartet of Goldings, Geoff Keezer, Ron Carter, and the drummer son! The transitions are seamless and the music is amazing!
"Songs From My Father", featuring Gerry Gibbs with the Thrasher Dream Trios, is not just a love letter to his Dad but also a recognition of his fine compositions, many of them with well-designed melodies.  Terry Gibbs may have retired his vibraphone but he remains in good health – this fine tribute is well worth investing in!!
Here's a video that gives you a look at the participants and the person they are celebrating: