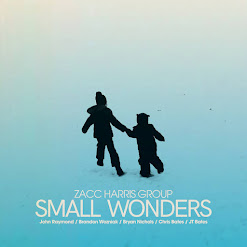 Zacc Harris is a MInneapolis, MN-based guitarist and composer who is active as a leader, co-leader (Atlantic Quartet), sideman, and educator.  His sextet, the Zacc Harris Group, has just issued its second album, "Small Wonders" for Shifting Paradigm Records. The ZHG consists of the leader (electric guitar, compositions), Brandon Wozniak (tenor sax), Bryan Nichols (piano), Chris Bates (bass), JT Bates (drums), and the newest member John Raymond (trumpet, flugelhorn) who joined some years after the debut album. On initial listenings, one can hear the influences of Pat Metheny and Lyle Mays; when one digs deeper, you can hear the "openness" of the late Kenny Wheeler's sound as well.  Pieces such as "Sundials"(listen below) and "Civil Dawn" bear witness to those influences (splendid trumpet work on the latter plus a stunning unaccompanied piano solo) while "A Beautiful Life" with its tender melody, point to new directions.  Nichols's piano work is integral to keeping the music flowing throughout the album.  Raymond's flugelhorn stands out on "Glass Houses" as does Wozniak's tenor sax stroll through the gardens created by the rhythm section.  Meanwhile, the rhythm section burns red-hot on the hard-bop romp "The Void" plus create a New Orleans-groove on "Apple Jacks".  The latter tune opens up so the tenor and trumpet can have a sweet exchange and the guitarist have a series of playful interactions with the rhythm section.

The nine-song program closes with the lovely ballad "Maya's Song". Dedicated to Harris's daughter, the music feels as if it was composed while the guitarist was watching his daughter sleeping, imagining her dreams, and hoping for a peaceful future. The piano accompaniment is a perfect counterpoint to the leader's lines. Nichols's solo also has a dream-like quality accentuated by the quiet brushwork and simple yet effective bass lines.
"Small Wonders" is big on melody, intelligent arrangements, and powerful as well as thoughtful solos.  Check out the Zacc Harris Group ––much to enjoy!

For more information, go to www.zaccharris.com. To purchase the album, go to https://shiftingparadigmrecords.bandcamp.com/album/small-wonders. 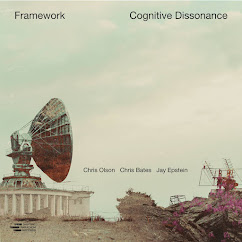 There is not a lot of information on the webpage of guitarist and composer Chris Olson, who along with bassist Chris Bates and drummer Jay Epstein make up the trio know as Framework. Their new album, "Cognitive Dissonances", is the trio's first for Shifting Paradigm and its first recording in over a decade.  Featuring 11 Olson originals, the music covers a wide swath of musical territory. Opening and closing with two takes of "New Anthem", the attentive listener can hear how the trio develops material. Version one refers a bit to Jimi Hendrix in the opening seconds and then falls into the melody Americans sing at the ballparks, stadiums, hockey rinks, and elsewhere.  Bowed bass and splashing percussion support the melody, played mostly using chords by the guitar. The "alternate take" that closes the program is fairly similar, not as noisy but still played somewhat like a dirge. 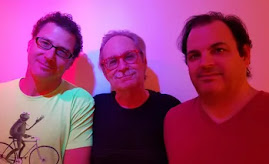 In between those two tracks is a fascinating collections that spotlight the excellent group communication, Olson's fine melodies, and his spirited guitar playing. Bates and Epstein are right in there with the guitarist, pushing and prodding him needs be or strictly building the foundation to frame his melodies and improvisations.  "Hitchens" rolls forward with guitars coming out of both sides of the speakers while the melody is in the middle of the sound spectrum.  "Dawkins" gives bassist Bates a chance to step out and he leads the group forward on the strength of his thick tone and melodic prowess.  There's a wistful quality to the guitar work on the ballad "Changes We Can Believe In" but a bit of grunginess makes its way into Olson's guitar tone before the bass solo returns to the opening feel.
Framework can swing ("Bluetrois"), can deliver a delightfully melodic waltz ("Pre-Conceived Notion"), and they can create aural waterfalls ("Tortured Thoughts") –– some of the song titles don't necessarily easily fit the songs but the trio's musicality will win you over.  "Cognitive Dissonance" does not describe how good and ultimately satisfying this music is (well, it does go a long way to describe the mood of "New Anthem"). Titles aside, this is quite an enjoyable album!
For some information, go to www.chrisolsonmusic.com. To purchase the album, go to  https://shiftingparadigmrecords.bandcamp.com/album/cognitive-dissonance.
Hear the opening "New Anthem": 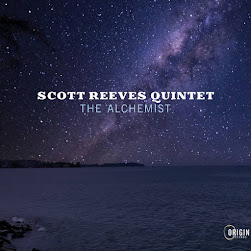 Many musicians used the pandemic to create new work, to hone new skills, and to find new ways to express themselves in a most uncomfortable.  It's possible Scott Reeves (valve trombone, alto flugelhorn, electronics) did all those things but he also went through his archives. When he did, Reeves listened with fresh ears to a 2005 live gig he recorded at City of College of New York with Russ Spiegel (guitar), Mike Holober (piano, electric piano), Howard Britz (bass), and Andy Watson (drums).  Now, pleased by the overall quality of the musicianship and sound, the musician/ composer passed
the tapes on to his label, Origin Records, and they released the album as "The Alchemist".  The music does not at all sound dated –– in fact, the music feels fresh and often exciting.  One can hear a link from several pieces to the music Miles Davis created for "Nefertiti" and "Filles de Kilimanjaro". 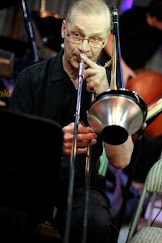 The Davis influence is evident on the opener, "New Bamboo".  The ringing tones of the Fender Rhodes mixed with the electronically altered trombone also hearkens back to Herbie Hancock's later Blue Note recordings.  Reeves switches to alto flugelhorn, Holober to acoustic piano, for "Shapeshifter", a medium tempo flowing piece that includes a potent drum solo. "Without a Trace" is a lovely ballad with a soft melody played by guitar and trombone. The leader's solo is wistful, as if you can hear him ruminating about a person who has gone.  Spiegel produces a handsome solo but pay attention to howe Holober, on acoustic piano, responds.  Britz, who is also an accomplished pianist, plays a short yet melodic solo.  "Remembrances" is another fine ballad with fine solos from Reeves (flugelhorn), Spiegel, and Holober.  "The title track grooves atop the percolating electric piano and the raucous drums. Trombone and guitar play the head that opens to Holober's playful solo and a hard-edged trombone spot.
That playfulness is also evident on the funky take of the standard "All or Nothing at All". The feel modulates from funk to straight-ahead and back to funk.  It's a delight hearing the Quintet playing around.  That's true throughout "The Alchemist" –– Scott Reeves and company sound like they having such a great time and the audience shows its appreciation for every solo and song!
For more information, go to www.creativejazz.com/.  To hear more music and to purchase the album, go to https://scottreeves.bandcamp.com/album/the-alchemist.
Here's the title track:
Posted by Richard B. Kamins at 8:56 PM