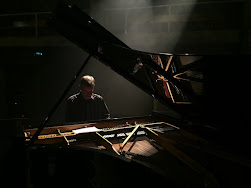 As I write this, it's nine months since pianist, educator, and composer Frank Kimbrough passed.  In that time, he has been memorialized in magazines and blogs, feted by his peers and students as well having 60 of his compositions recorded by Newvelle Records, a digital-release only featuring 67 musicians in multiple groupings.   Kimbrough himself recorded in many smaller group settings, solo, duos, trios, quartets, plus sat in the piano chair of the Maria Schneider Orchestra for over 25 years, multiple tours, and eight albums.  The North Carolina-native always played with thought, wit, intelligence, and a subtle swing that supported his bandmates and kept the attention of the audience. He could play "out" without making one feel as if the music was spinning off into infinity. 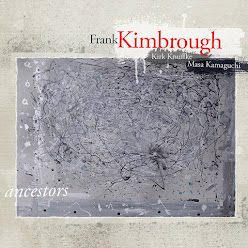 Sunnyside has just issued "Ancestors", a trio session recorded in 2017 featuring the pianist with cornetist Kirk Knuffke and bassist Masa Kamaguchi performing 11 pieces.  Seven are Kimbrough compositions, two are credited to the pianist and Knuffke, with one by the cornetist and Yamaguchi plus one by Kimbrough's wife Maryanne De Prophetis.  It's hard to be objective as I knew Frank for over two decades, having chatted with him on the phone, at gigs, and via email. He was always friendly, always willing to answer a question about the music.  Listening to him play solo was a treat; there were the pianistic influences of Paul Bley, Keith Jarrett, and a touch of Thelonious Monk yet he was not beholden to them, especially as his writing and playing matured. Kimbrough was never afraid to revisit his older compositions when he was playing with a new lineup. 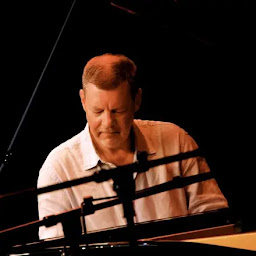 Approach this music early in the morning when your defenses are down. Much of the music is contemplative, moving at a ballad tempo . For instance, "Air" moves at slow, slow, pace, Knuffke seemingly whispering out the melody as Kamaguchi plucks and plays short lines. Meanwhile, it's the piano that builds the foundation of the song. During his solo, Kimbrough uses space and the sustain pedal to create melodic lines that seem like clouds scattering across the sky. "Jimmy G" (dedicated to reed master Jimmy Giuffre) has the feel of Monk in the easy rolling piano lines as well as a bluesy, Chet Baker, feel from the cornet. The piano solo also mines the blues vein with just the right amount of grit before the bass solo kicks the heat up a notch.  Every piece is worth exploring again and again –– even the two+ minute corner-piano percussion duo "Eyes" stands out for Knuffke's playful improvisation over the percussive sound of Kimbrough thumping on the side of the piano.
"Ancestors" can also be a worthwhile late evening spin, a musical after-dinner drink that soothes the wrinkles of the day. Frank Kimbrough is gone from this plane of existence but he left a strong musical legacy that will move you as well as entertain you.
For more information, go to www.juilliard.edu/news/148001/frank-kimbrough-1956-2020-memoriam. To hear more and to purchase the album, go to https://frankkimbrough.bandcamp.com/.
Here's the title track:
Posted by Richard B. Kamins at 6:45 AM