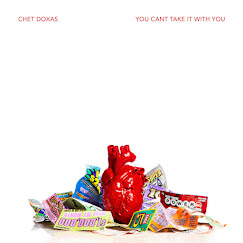 Doxas was on tour with Ms. Bley and her partner, bassist Steve Swallow, when they suggested he take one month each per composition for a project he was creating. As the songs took shape, the saxophonist kept hearing a drummer-less trio in his head.  He recruited bassist Thomas Morgan and pianist Ethan Iverson and, in September of 2019, they recorded the program that one can hear on Doxas's new Whirlwind recording "You Can't Take It With You".  The results are fascinating, playful, adventurous, melodic, and highly interactive.
The title track leads off the album; the first sounds you hear are Morgan's richly melodic bass lines (at times, the melody one hears sounds like the "Sesame Street Theme" before the piano and tenor enter. The music settles in to a bluesy groove which the pianist jumps in and plays a delightful, playful, Thelonious Monk-inspired solo.  When the leader comes in for his solo, he starts with fluttering lines that sound Middle-Eastern before diving into a playful solo filled with circular lines, jabs, and feints. Watch out for the false endings.

"Lodestar (for Lester Young)" has a bouncy riff played by sax and bass while the pianist plays inside his instrument creating all sorts of dissonant tones before decided turn towards melody.  Doxas's long-held tenor notes connects the song to the next one, "Cheryl and George". Dedicated to the saxophonist's mother and father, the song starts with the tenor leading the way before Doxas and Iverson play together while Morgan solos.  After a short break, the trio comes back in and improvise in and around each other. 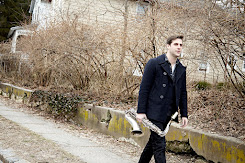 There's plenty to enjoy here.  "The Twelve Foot Blues" (inspired by Mark Twain) is another playful tune whose rhythm has a New Orleans-feel in its danceable bounce.  "Soapbox" was built on the rhythms of the speech patterns of late-night politicos.  Doxas not only creates melodic lines, he also "speaks" through his sax.  "All The Roads" is inspired by a speech by the late Fred Rogers; the music is contemplative asking the listener to think of all the people "who have helped to shape you." 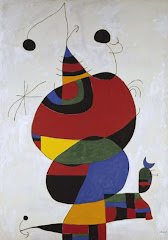 The program closes with "View From a Bird."  Composed in response to viewing a painting by Joan Miró (see left), there is a formality yet playful that hints at the influence of Ms. Bley's writing.  Iverson's piano lines have a classical feel while Morgan plays counterpoint off the pianist's left hand.  As the tenor solo flies above his partners, he does come back to land. The piano solo is delightful (is that James P. Johnson we hear for four bars?)
You can take "You Can't It With You" with you as a recording but make sure to sit and contemplate on what you have heard before going back and listening again. It's obvious Chet Doxas put a lot of thought and work into these 10 pieces, that he chose the right musical partners, and that they too worked hard to make this music sound so good, so effortless, so alive.
For more information, go to www.chetdoxas.com. To hear more and to purchase the album, go to https://chetdoxas-whirlwind.bandcamp.com/album/you-cant-take-it-with-you.
Hear "View From a Bird":
Posted by Richard B. Kamins at 3:52 PM