Masters at Play + A Pleasing Surprise 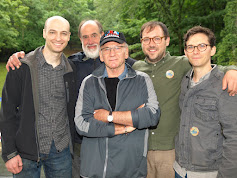 Over the past seven years, saxophonist and NEA Jazz Master Dave Liebman has been touring and recording with his Expansions quintet. The group –– Matt Vashlishan (alto sax, flute, clarinet, EWI), Bobby Avey (piano, electric piano, synth), Tony Marino (acoustic bass), and Alex Ritz (drums, frame drum) –– is extremely versatile with each musicians having impressive credentials. I had the joy of seeing the group live at The Side Door Jazz Club in CT and their interactions along with Mr. Liebman's compositions (this was around the time of the release of the band's fourth album for Whaling City Records, "Earth" in late 2019) made for compelling listening. 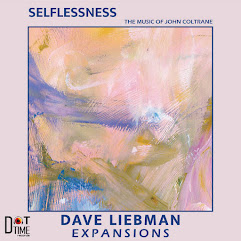 Mr. Liebman & Expansions fifth album is "Selflessness: The Music of John Coltrane" –– it's their first for Dot Time Records and continues the saxophonist's decades-long quest to investigate and to reinvigorate the music produced in the last eight years of Coltrane's life (1959-1967).  The nine-song program opens with with "Mr. Day" (from "Coltrane Plays the Blues"): here, the quintet ups the tempo and the front line dances away. Vashlishan goes first with a fiery alto solo which leads to a really funky piano romp over the rampaging drums. Mr. Liebman enters, his soprano sax solo (he only plays soprano on this album plus one track with wooden flute) starting in a cool vein before Ritz's fiery drums push him to dig in. A lively frame drum intro sets an Andulausian atmosphere to "Ole" before the wooden flute, clarinet, and electric piano push the music into a trance-like feel.  Marino's foundational bass line moves the reeds and piano to address the theme. Avey's synth solo sounds more like a guitar until his phrases remind one of the work Chick Corea produced with the electric Return to Forever.  Both Mr. Liebman and Vashlishan's solos have a Middle-Eastern tinge.

As you move through the program, you stop making comparisons and bask in the excellent music.  "Peace On Earth" is a stunning reminder that John Coltrane could produce the loveliest of musical prayers while "Compassion" echoed the composer's embrace of meditation practices. On the Expansions version, the soprano sax weaves its way through fields of electronic sounds (EWI and synths) while the rhythm section keeps a steady rhythm for all to ride atop.  The album's title track opens with an Eastern feel before the rhythm section create a start-stop that gives the bottom a Hip Hop feel with the soprano and alto saxes move in and around each other which becomes a call-and-response. Avey's acoustic piano solo has touches of classical, Bud Powell, thundering chords, and more.
One of the bigger surprises is the quintet's take on "My Favorite Things".  After a lovely solo piano intro, the band enters in a rapid-paced 4/4 beat with the piano, alto, and soprano addressing the theme.  Vashlishan takes the first solo over the driving rhythm section (no piano) –– Mr. Liebman is next over the responsive bass and drums, Avey churning out solid chords as the intensity builds.  The energy emanating from the speakers is exhilarating.
"Selflessness" closes with a reverential take of "Dear Lord".  After a powerful prayer-like bowed bass introduction, flute (Vashlishan) and soprano sax present the theme over a soft synth wash, bass, and the "pitter-patter" of the drums. It's the perfect finishing touch to an album that grows stronger upon each listen and leaves one wanting more. Dave Liebman Expansions does more than pay tribute to John Coltrane; they illustrate how alive with possibility his music continues to be and do it all without resorting to imitation. They give this music new wings.  You'll also notice that while Dave Liebman is the leader, this quintet is truly a cooperative, allowing all voices to be heard.
Dot Times Records released "Selflessness" on September 3 and Mr. Liebman celebrated his 75th birthday on the following day.  May he live long and play on!
For more information, go to https://davidliebman.com/home/groups/expansions-dave-liebman-group/.  To hear more and to purchase the album, go to  https://dottimerecords.bandcamp.com/album/selflessness.
Here's the ensemble's fascinating take on "My Favorite Things":

It's been two decades since Kate McGarry released her first album.  Much has happened in that time, some sad, a lot good.  Ms. McGarry has worked with Fred Hersch, in John Hollenbeck's Big Band alongside Theo Bleckmann, in the vocal quartet known as MOSS, left New York City for North Carolina with her partner (life and musical) guitarist/ arranger Keith Ganz. Besides her debut album (reissued in 2003 by Palmetto Records), she's recorded six more albums as a leader or co-leader (with Ganz).  Each one covers a lot of musical territory, has an atmosphere all its own, and illustrates just how splendid a vocalist Ms. McGarry is.  It's been three years since she, Ganz, and keyboardist Gary Versace crowd-funded and issued "The Subject Tonight is Love".  At the time, I spoke with her and she said that they recorded a lot of material and it might show up as another album. 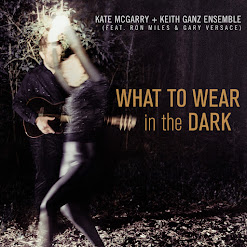 Now there is a new album. "What To Wear in the Dark" (Resilience Music) is credited to the "Kate McGarry  + Keith Ganz Ensemble (featuring cornetist Ron Miles & Gary Versace)".  Five of the 10 tracks were recorded in May of 2017, the same sessions that produced the previous album. The group becomes a quintet with the addition of drummer Obed Calvaire. Four tracks were recorded in March of 2020 without Miles and, this time, the rhythm section is Sean Smith (bass) and Clarence Penn (drums). One other track, "On the Road To Find Out", composed by Cat Stevens (Yusuf Islam) for his 1970 Lp "Tea For The Tillerman", was  recorded in March 2021 at the individual musician's home; besides Ms. McGarry and Ganz, that ensemble features Erin Bentlage (vocals, vocal arrangement), Becca Stevens (vocal, charango), Michelle Willis (vocals, Wurlitzer), Christian Euman (drums), and James Shipp (brushes, pandiero).
Ms. McGarry arranged the opening track, the Howard Dietz/ Arthur Schwartz classic "Dancing In The Dark". Versace's accordion creates a waltz tempo while the vocalist digs into the lyrics. Miles' cornet accompanies her vocal improvisation while Calvaire's brushes dance over the drums.  The song sets the stage for a surprising program, one that includes Donald Fagen & Walter Becker's "Barrytown", a lovely, emotional, expansive, take of Joni Mitchell's oft-recorded "Both Sides Now", and a playful stroll through Paul Simon's "The 59th Street Bridge Song (Feelin' Groovy)", complete with bubbly Wurlitzer electric piano and a low-key cornet solo that is the essence of "groovy" and "gritty".  The opening of that last track features an except from pianist-author Hal Galper's "A Touring Musician" –– Ms. McGarry rushes her way through the description of how tough it is for working musicians on all levels of popularity to find and make their way. After a breathless climax, she and the quintet break into "Slow down, you move too fast".  And don't we all feel that's the way is.  The "groove" is irresistible as is Ron Miles' delightful solo. 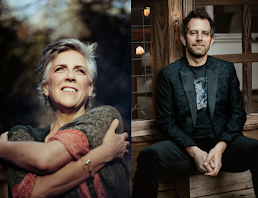 There's plenty to love on this album.  The lovely trio (vocal, guitar, and organ) take on "Desperado" which has the feel of a James Taylor piece as well as that stunning version of "Both Sides Now". That latter track is one of Joni Mitchell's most-recorded pieces yet just listen to how Ms McGarry weaves her way through the words. The whisper-soft brush work of Clarence Penn and wonderfully melodic bass work of Sean Smith build a soft foundation for Versace's impressionistic piano and Ganz's quiet acoustic guitar lines.  Ganz's smart re-arrangement of George Harrison's "Here Comes The Sun" revolves around the the galaxies of melody, acoustic and electric guitar, the throbbing rhythm section, and Versace's burbling organ (listen below –– does the organ sound like Rod Argent's iHammond B-3 in The Zombies "Time of the Season" to you?)
The team of Kate McGarry and Keith Ganz is proving to be a formidable one; "What To Wear in the Dark" has so much to offer a listener in search of songs that touch the heart, the mind, and the feet (several of these tunes will make you want to dance, in the dark and in the light!) Add to that the fine musicianship of Gary Versace and Ron Miles as well as the other musicians and voices that are on the recording and you have an unforgettable musical experience.
For more information, go to https://katemcgarry.com/.
Hear "Here Comes The Sun":
Vocalist and educator Sheila Jordan is, to quote many aficionados, a "jazz singer's Jazz Singer."  After growing up in the coal-mining country of Pennsylvania, she discovered Charlie Parker, found her way back to her birthplace, Detroit MI, where Ms. Jordan worked with numerous Black musicians. After performing with a jazz vocal trio, she moved to New York City where she married Parker's pianist Duke Jordan.  It was believed that she made her recording debut with George Russell as well as a brilliant 1963 Blue Note Lp, "Portrait of Sheila", a session that featured guitarist Barry Galbraith, bassist Steve Swallow, and drummer Denzil Best.  There was no immediate follow-up; in fact it was 15 years until her SteepleChase recording "Sheila" with bassist Arild Andersen. She's gone on the record numerous albums including a series of dates with pianist Steve Kuhn as well as duos with bassist Harvey S. 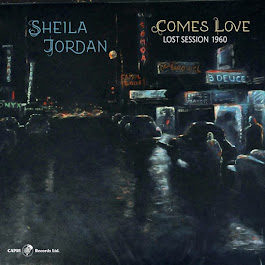 Imagine everyone's surprise when Capri Records issued "Comes Love: Lost Session 1960".  Recorded in June of 1960 on tje long defunct with an unnamed piano trio (at the time, Ms. Jordan had been working with pianist Johnny Knapp but no information from this session exists), the 11 standards find the vocalist in full voice, her great control, phrasing, and ability to make a song hers right in place.  None of the songs appear on the Blue Note album but you can hear all the elements that would be the mature Sheila Jordan. She and the trio dance their way through the 98 seconds of "It Don't Mean a Thing (If It Don't Got The Swing), her scatting and vocal style hinting at Ella Fitzgerald. "I'll Take Romance" also swings delightfully; the vocalist doesn't take many liberties with the melody but her voice is so youthful and the song satisfies.
The ballads are worth the price of admission. Whether it's the opening track, "I'm The Track", the dark-tinged "Ballad of the Sad Young Men", Billie Holiday's bittersweet "Don't Explain" (you can hear the composer's influence on Ms. Jordan's performance), the wistful "These Foolish Things", or the impressionistic "Glad to Be Unhappy", her enunciation, the sympathetic rhythm section, and the vocalist's conviction draw the listener and you realize this album is a true treat.
The final track, the swinging "They Can't Take That Away From Me", illustrates many of Ms. Jordan's performance style that remains 61 years later. She can be sassy, she can break your heart, but Sheila Jordan always make the listener feel she's singing just to him or her.  Great find and kudos to Capri Records for buying the rights to release "Come Love".
For more information, go to www.sheilajordanjazz.com.
Give a listen to the opening track:
Braithwaite & Katz · I'm The Girl - Sheila Jordan
Posted by Richard B. Kamins at 8:18 AM