Arturo O'Farrill is a polymath of the highest order.  His music he composes for his various projects, including the Afro Late\in Jazz Orchestra, not only continues his explorations that his father, the renowned composer and arranger Chico O'Farrill, began in the 1940s but also has branched out to speak to the diaspora that is the Black and Hispanic experience (the composer and pianist was born in Mexico City but moved to New York City when he was four).  Arturo began his professional career working with Carla Bley, going to perform with Harry Belafonte, Wynton Marsalis, and others plus working with his father's original Afro Cuban Jazz Orchestra, returning the band and the senior O'Farrill's music to Cuba in 2010. 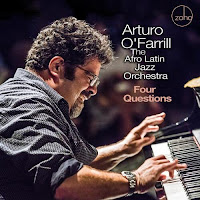 "Four Questions" (ZOHO Music) is the younger O'Farrill's seventh album with the Afro Latin Jazz Orchestra. It's a fascinating collection recorded over the past four years and the first in O'Farrill's recorded oeuvre to feature all original pieces. The program includes the four-part suite "A Still, Small Question" that features the ALJO with a vocal choir, three new works for large ensemble, and the title composition (more about that below). The album opens with the playful, bouncy, sassy, "Baby Jack" – named for a friend's first grandson, the trombones get first crack at pretending crazy kids while the trumpets attempt to be the voices of reason. Alto saxophonist David DeJesus moves out of the cacophonous sounds of the household with a keening solo then returns for a more playful take. "Jazz Twins" is dedicated to the composer's friend from Los Angeles who are big jazz fans and have traveled around the country to see / hear the band; they were invited to go to Cuba with O'Farrill.  The music has a sophisticated feel with excellent work from trumpeter Dave Smith and saxophonist Ivan Renta. After the long opening melody section, the band moves into a rapid-fire Latin beat led by drummer Vince Cherico with percussionists Tony Rosa and Carly Maldonado. Renta and Smith take advantage of the fiery rhythms to produce two excellent solos.

The title track, originally premiered as the "Cornel West Concerto" in 2016 at the Apollo Theater in Harlem NYC, is a tour-de-force for one of the more forceful orators of the late 20th and early 21st Century.  The "Four Questions" (now the title of the piece) refer to four questions raised by W.E.B. DuBois in his 1903 classic "The Soul of Black Folk": What does integrity do in the face of adversity / oppression? What does honesty do in the face of lies / deception? What does decency do in the face of insult? How does virtue meet brute force? Dr. West's libretto covers a wide swath of territory; one gets to hear his biography ("...born on the chocolate side of Sacramento"), then he moves on weaving the questions with his commentary on the power of Black music on the popular music scene of the 20th Century, namedropping John Coltrane and other musicians. There's a delightful section during which O'Farrill moves through history of 20th Century piano with the encouragement of Dr. West.  But the "Questions" are so important to this music as they call on the composer, musicians, and listeners to do more than write, play, and be audience – choose to be more deeply involved in your communities to help bring about the equality that the Forefathers of the United States hoped would be the backbone of this country. 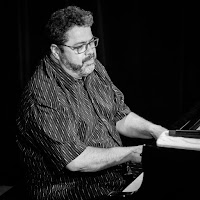 That's just the first three tracks, over half the disk with five pieces to go.  "A Still, Small Voice" takes its libretto from Christian, Hindu, and Shinto texts. The piece was inspired by the global financial crisis of 2008 and could easily speak to the current pandemic and its economic consequences for poor and middle class people.  The music for the piece is uniformly excellent while, at the same time, the voices force one to pay attention to them.  The third "movement", "Cacophonous", is a fascinating work with powerful playing from each section plus an excellent soprano sax solo from Ivan Renta.

The one track I'll leave you to discover for yourself is "Clump/ Unclump" –– it is sandwiched between Dr. West's stunning "Oratorio" and the rousing Suite that closes the album. "Four Questions" is splendid listening from start to finish.  This is music that makes you want to dance, challenges your ears as well as your beliefs, filled with brilliant writing, intelligent arrangements, delightful playing, and more.  On top of all that, Arturo O'Farrill's Afro Latin Jazz Orchestra continues one of the finest large ensembles on the planet!

For more information, go to www.arturoofarill.com.

Colombian-born pianist, composer, and arranger Carolina Calvache issued her debut album on Sunnyside Records in April of 2014, a program of original pieces that featured a sextet including drummers Antonio Sanchez and Ludwig Afonso, trumpeter Michael Rodriguez, saxophonist Jaleel Shaw, and bassist Hans Glawischnig.  "Sotareño" is an impressive album, as much for her intelligent compositions as for the excellent musicianship. 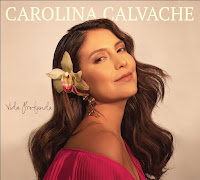 She began recording her second Sunnyside album, "Vida Profunda" in 2017 with sessions spread over the next two + years. The 10 tracks feature different vocalists with only one, Sara Serpa, appearing on more than one song (though Lara Bello sings lead on one tune and is part of a chorus on another); plus, the only male vocalist is Ruben Blades (see and hear below). Five of the tracks feature a string quartet but no two pieces have the same personnel.  What pulls the entire project together is Ms. Calvache's splendid compositions and arrangements.  The program is a tribute to poetry that has always been a part of the musician's life. Lyrics by Pablo Neruda, Robert Duncan, Porforio Barba Jacob, Yiannis Ritsos, and James Weldon Johnson as well as from fiction writer Gabriel Garcia Marquez plus four original works from Ms. Calvache.

Jacob's title poem leads off the album with Marta Gomez on lead vocals.  Note how the string quartet and piano help to tell the story while bassist Petros Klampanis and percussionist Keita Ogawa keep the music moving forward.  Blades's handsome voice  helps to convey the emotion in the original "Te Conoci de Neuvo" ("I Met You Once More") while the pianist lifts the music out of the ordinary with her lyrical phrases over the supportive bass of Peter Slavov, quiet brush work of Johnathan Blake, and gentle rhythmic hand percussion of Samuel Torres.

Every track stands out. The brilliant arrangement of brass, reeds and strings on "Sin Un Despido" ("Without a Dismissal") blanket the voice of Claudia Acuña as she sings Ms. Calvache's poem in tribute to the Brazilian soccer team that died in a 2016 plane crash. Sara Serpa is featured on "Hope" (with lyric from JW Johnson's "Lift Every Voice and Sing") – the quartet of the leader's piano, Slavov, Blake, and Torres set a torrid pace for the vocalist's splendid wordless journey (she speaks several lines from the poem in the song's opening seconds.  Ms. Serpa also takes the lead on "El Rastro" ("The Trail"); the lyrics are from Garcia Marquez's short story "El Rastro de tu Sangre en la Nieve" ("The Trail of your Blood in the Snow").  The music is quite powerful and, again, the string arrangement stands out.   Michael Rodriguez's clear-toned trumpet is featured along with the lovely voice of Aubrey Johnson and the string quartet on the lovely ballad "Childhood Retreat."  With lyrics (in English) by Duncan, the music changes pace on the power of the piano and Blakes's powerful drums.

"Vida Profunda" is a profound work of art, one that celebrates poetry, music, and the singing voice in equal measure.  In the midst of these seemingly endless dark days, this music proposes, like the Spring season outside our windows, that we often must have hope in the face of depression. A supreme triumph for Carolina Calvache, a program that should be heard on concert stages around the world!

For more information, go to www.carolinacalvache.com.  To purchase the album, which will be released on 5/29/2020, go to carolinacalvache.bandcamp.com/album/vida-profunda.

Here's the track with Ruben Blades: