The Hard Blues and Heroes 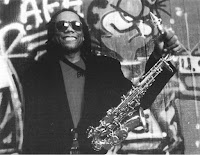 I don't exactly remember the first time heard I heard "The Hard Blues", a gutbucket tune informed by the Texas blues saxophonist and composer Julius Hemphill grew up with, the gigs he played as a young man, and the "free" music he discovered in St. Louis, MO as a founder and member of the Black Artists Group, a short-lived collective similar to the AACM of Chicago. But, the song, recorded in 1972 and not released until 1975 on the Lp "Coon Bidness" (later reissued on Arista/ Freedom as "Reflections"), enters your brain and takes you away into a world that sounds familiar and strange at the same time.  Cellist Abdul Wadud plucking away while drummer Philip Wilson keeps a steady beat create a steady bottom as the alto saxophonist s well as the trumpeter Baikida Carroll read the rollicking theme.  The piece, as you will hear below, opens up and breaks down to long, urgent, solos but rarely loses that hard-edged bottom.

No piece of music gave me shivers the way that piece did and, truly,  still does.  On May 1, Bandcamp donated all their profits from sales to the artists whose albums they sell and I discovered Heroes Are Gang Leaders, a music and poetry collective that first came to life in 2014 when poet Thomas Sayers Ellis and tenor saxophonist James Brandon Lewis created a group to celebrate the life and writings of Amiri Baraka.  The ensemble, which ranges from 10 - 15 members (depending on the whims of the leaders and the particular music, have recorded five albums since the ensemble debuted including an albums that featured Lydia Lunch, poet Anne Waldman, and guitarist Thurston Moore.  The ensemble's latest "Artificial Happiness Button", was released in March of this year on Ropeadope Records (the group's debut on that label).

The second track on the album, "Mista Sippy", is the closest piece of music I found that rocks me the way that "The Hard Blues" does .  There's a lot going on between the blues "licks" the musicians lay down and the various poems, spoken word, and song on top of the beat.  The lyrics deal with lynching, drinking, the addictions of drug and drink plus how they're affected by poverty, racial disparities in the South and around the United States, and much more.  The piece runs over 13 minutes and the sounds grab you by the throat without letting go. The music below the panoply of voices pushes, prods, swells and ebbs.  Just listen –– the lyrics are quite raw at times –– but do listen.

Personnel on this track: