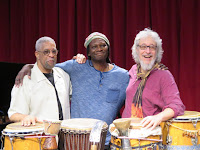 The trio of Adam Rudolph (percussion, voice, chordal instruments), Ralph M. Jones (reeds, wooden flutes, voice), and Hamid Drake (percussion, voice), have played together for many years in various ensembles. Rudolph and Drake first met in 1969 going on to work with jazz groups in the Mid-West while Jones and Rudolph met in 1974 and had a long relationship/ friendship with reed master/ educator Yusef Lateef.  Jones has been a member of Rudolph's Go: Organic Orchestra since its inception two decades while Drake has played and recorded with the other two musicians as part of Rudolph's Moving Pictures ensemble. They've got history. 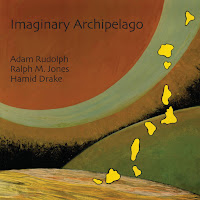 Several years ago, the three musicians formed the Karuna Trio. "Karuna" is a Sanskrit word for "compassionate action" and is related to the work of reiki (compassionate healing) –– in Buddhist traditions, the word simply translates to "compassion").  If one approaches the music the Trio makes on its second recording, "Imaginary Archipelago" ( as actions for healing, it may give you a better idea of what the ensemble attempts to do with its music.  Yes, the music can be considered mystical but it's also timeless while, through the use of electronics and editing, quite contemporary.  There are moments throughout the 67-minute program (11 separate tracks) that are cacophonous but the music never erupts into pure noise.  It may remind some of Dr. Lateef's sonic experiments as well as Miles Davis's post "Bitches Brew" period (1970-74).

If you allow the music on "Imaginary Archipelago" to overtake your senses, the experience will serve to help you through these and any frightful times.  The music that Karuna Trio creates is not about technique but has everything to do with interactions, to rhythms, to drones, to creating sounds as prayer, to allowing the imagination free range to express itself. You do need to know the names of songs or who plays what, you just need to surrender to the sound. My favorite time to listen to this album is in the early moments of daylight with the birds outside our windows singing for the sunshine. As the music plays, the bird's songs join in as the chorus to the drums and reeds.  Give this form of peace a chance!

For more information, go to https://metarecords.com/karuna-ensemble.html.  To listen to and purchase this album, go to https://drakejonesrudolphkaruna.bandcamp.com/album/imaginary-archipelago-2.

Here's a sonic glimpse into the Trio's music:

In 2017, saxophonist, flutist, and bass clarinetist Brian Landrus released "Generations" on his own BlueLand Records label –– he wrote all the music and arrangements for a 25-member large ensemble that included am eight-member string section. It was and is a major accomplishment in the now 42-year old musician's career, the ninth recording in his nearly two-decade career which started on 2007 with his debut album "Forward", a self-produced album issued on Cadence Jazz Records.  Since 2010, Landrus has issued all his music on BlueLand and, pretty much, has gone his own way. How does one follow up that highly acclaimed album?

His new recording, "For Now", is the second straight Landrus album co-produced by Robert Livingston Aldridge (the classical composer and Professor at Rutgers University who also helped on arrangements); this time, he's joined by Herschel Garfein who worked with pianist Fred Hersch on "My Coma Dreams" and who is also a composer plus is on the faculty of the Steinhardt School of Music at New York University. 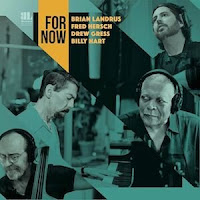 Landrus has organized quite the ensemble to play this 14-song program (11 originals, two from Thelonious Monk, and "Invitation" by Bronislaw Kaper)––the nine musicians include the afore-mentioned Mr. Hersch, Billy Hart (the fourth time the drummer has recorded with the reed player), Drew Gress (bass), Michael Rodriguez (trumpet) plus a four-piece string section composed of violinists Sara Caswell and Joyce Hammann, violist Lois Martin, and cellist Jody Redhage-Ferber.  Instead of a "concept" album, Landrus has put together a program that shows his wide-angle approach to composing and arranging. The date kicks off with a swinger, "The Signs", which has a sharp theme that opens up to delightful solos from Rodriguez, Hersch, and Landrus (baritone sax).  Make sure to pay attention to what the rhythm section brings to the song.  Hart kicks and splashes cymbals, getting deep in the groove while Gress keeps the music together.

There are a number of delightful tracks on the album. "Clarity in Time" is a handsome ballad that features eight of the nine musicians (the trumpeter sits this one out). Landrus's baritone sax leads the way; his tone and attack may remind some of Harry Carney, or even tenor giant Ben Webster, plus the piano solo is rich and endearing.  Hart leads the quintet into "J.J." and Landrus leaps out of the thematic section with a hearty solo followed by a dancing trumpet solo.  The drummer really prods the soloists forward. "For Whom I Imagined" opens with the string quartet before the bass clarinet plus Hart's splendid cymbal and drumset play move the piece forward. Landrus overdubs a second bass clarinet as well a terrific flute solo.  The standard "Invitation" belongs to the strings and baritone sax for the opening prologues before the rhythm section enters and the music jumps forward. Listen closely to the interaction of the strings and sax before the latter steps out for a lively solo. The string arrangement on "Her Smile" adds such a sparkling to the baritone solo; Ms. Caswell steps out for a delightful solo followed by a string quintet break (Gress joins them).  To top it off, Billy Hart kicks the bottom out with glee! His work on the next track, "The Wait", really shines as well (no surprise the veteran drummer is a treat throughout the program).

The two Monk tunes also stand out.  "'Round Midnight" is Landrus alone on bass clarinet.  His breathy tone and circular lines in and around the classic melody as well as the performance is short (2:46) makes the piece sweeter. Hersch joins Landrus (baritone) for "Ruby My Dear" – the two take their time to work through the melody and then their two-way conversation is quite harmonious, closing the program in a introspective blue mood.

Brian Landrus shouldn't and doesn't feel the need to top his previous album.  Because he did not fall victim to the "to this" syndrome, "For Now" strikes this listener as the equal of "Generations", looser, more open, with the airy string arrangements helping this production stand out. Filled with delightful music played by an excellent ensemble, this album will brighten your life!

For more information, go to brianlandrus.com.