Preview of a Fascinating Collection

Later this year, bassist, composer, arranger, bandleader, and conceptualist William Parker will release a 10-album set.  Titled "Migration of Silence Into and Out of The Tone World" and released on Parker's Centering label, each disc features different artists, many with vocals, playing the bassist's iconoclastic "world" music.  Long-time listeners will recognize a number of the collaborators (such as vocalists Kyoko Kitamura, Ellen Christi, and Fay Victor, vibraphonist Matt Moran, pianist Eri Yamamoto, percussionist Hamid Drake and others.  Parker not only plays bass on most of the album but also guembri (a three-string instrument from Africa with the range of a bass), muted trumpet, plus percussion and wind instruments. 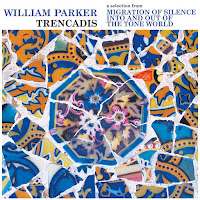 To whet one's appetite (and with a plea to contribute to help bring the project to light), Parker has issued "Trencadis", an online release through Bandcamp.  The name of the compilation comes from Catalan and means "bits and pieces of broken tiles and chinaware glues together to make type of mosaic" (the cover painting gives one that idea).  Go to williamparker.bandcamp.com/album/trencadis-a-selection-from-migration-of-silence-into-and-out-of-the-tone-world where you can listen to one track from each album and then make a donation to support the box set's release.  If you are a long-time fan of Parker's music, you know the universal range of his music.  If you've not check out his music ever, this sampler is a taste of his overall oeuvre.  Either way, this music is powerful, contemporary, timeless, and emotionally powerful.